You are here: Home / Women's Fiction / After All Is Said And Done by Belinda G. Buchanan @BelindaBuchanan 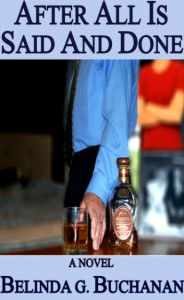 Two couples, one affair, one innocent baby. What would you do if you found out the son you loved wasn’t yours? Ethan Harrington’s world has just been shattered.

What Inspired You to Write Your Book?
So many times we see the immediate ramifications of adultery, but not the long term effects. I wanted to write a story that depicts how devastating it can be for both couples, especially when a child comes out of it.

Who are your favorite authors?
Danielle Steel (Daddy & Mixed Blessings) are my all-time favorites. I also like Katherine Owen & Barbara Kingsolver. When I was younger & had more energy I would stay up and read the John Jakes’ novels. The Seekers kept me up til dawn.

How Did You Come up With Your Characters?
I love high drama, and I love tall, dark, and handsome – so for my main character Ethan Harrington I just envisioned all the greats- Clark Gable, Cary Grant, George Clooney and then added the drama. Ethan is far from perfect which is what makes him so human. He is a borderline alcoholic which I felt added an element of vulnerability to the story.

Book Sample
Jessica sat in her kitchen blissfully eating the comfort food that Grace had prepared for her.

“Was the food that bad at the hospital?”

She swallowed and shook her head. “No. You just don’t know how good of a cook you are.”

The older woman raised her eyebrow. “You could have learned if you’d just stayed in and helped out once in a while.”

“True,” she said, laughing. “But I was having too much fun.”

The two women were cousins, and had grown up in the same house together. When Jessica was just six, her mother had decided to marry some rich Texan and move to Houston, leaving her behind in her aunt’s care.

It was a bad time as Grace’s brother, William, a private in the army, had been killed just weeks before, but Jessica’s mother couldn’t see past her own selfishness to wait.

Bound by tragedy, she and Grace quickly became best friends. Jessica idolized her older cousin, eventually choosing to follow in her footsteps to becoming a doctor.

The two of them had been through their share of good times and bad times, but Grace had always been there to pick up the pieces, including being there for her when her mother had died. Sometimes, Jessica felt as if she clung to her like a child, but the older woman didn’t seem to mind.

She wiped her mouth with a napkin and sighed. Where had the years gone? Grace now had a grown son, and was a grandmother to twin girls.

“Are you excited about tomorrow?”

Jessica laughed again. “As if you didn’t know.” Ethan was coming home tomorrow with the baby. “You know, Grace, I don’t even have diapers for him.”

“Well,” she said with a chuckle, “you make a list, and I’ll run to the store for you before I go home.”

Grace put the leftovers in the fridge and began cleaning up the dishes. She knew how happy Jessica was right now, but couldn’t help wondering if she had forgotten about the elephant in the room. She didn’t want to ruin this moment for her, but felt she had to say something. “Jessica, I know you’re very happy right now, but I think you’re forgetting about the most important thing, aren’t you?”

Her smile immediately faded. “I haven’t forgotten about it,” she answered in a clipped tone.

“Well then, I think you’re choosing to ignore it.”

Jessica looked away. Grace could be extremely blunt sometimes. “No, I’m choosing to not think about it right now. I just want to hold my son and be with my husband. I’m not thinking beyond that.”

“He needs to know the truth, Jessica—”

“I know,” she said cutting her off. She sat there for a moment trying to hold back the tears. “I know, but I’m scared to tell him. I don’t want him to leave.”

Grace sat down in the chair across from her. “You can’t let Ethan go on thinking this is his baby.”

“Why not? What he doesn’t know won’t hurt him.”

She gave her an exasperated look. “That’s not the point, is it?”

Her cell phone rang. “It’s Ethan!” she said excitedly as she hurried into the other room to talk.

Grace felt an uneasiness settle in about her. She knew Jessica’s reasons for not wanting to tell him were valid, but she also knew if Ethan ever found out the truth on his own, he would be devastated.

Author Bio:
I am an author of edgy, women’s fiction & mystery romance. I wrote my first novel while still working nearly twenty years ago. I would write my thoughts and ideas down on scraps of paper and sticky notes and then come home and beat a path to my computer. I have three books out: Seasons of Darkness (a coming-of-age novel about a young man trying to cope with his mother’s suicide), The Monster of Silver Creek (a mystery/romance set in a small town in Montana), and the aforementioned After All Is Said And Done. I currently live in Kentucky with my husband and two sons as well as a menagerie of animals. Besides being a mom and author, I am also a professional hamster wrangler and firm believer that Krazy Glue can fix anything.