You are here: Home / Mystery/Suspense / Against Her Will by Peter Martin @pmartinauthor 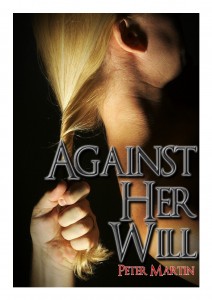 Rape is every woman’s worst nightmare, an act so vile, so devastating, it robs the victim of any sort of dignity, leaving scars that can last a. lifetime. Having family and friends rally round can make all the difference in the world. But without this support the victim may never fully recover.

Donna is such a victim. When she is brutally raped, her life comes crashing down, bringing with it memories of an unhappy childhood. Having lost everything dear to her, she almost succeeds in making the ultimate sacrifice, but for a young male nurse, who slowly helps her come to terms with the past. Just when she thinks she’s over the worst, she makes a horrifying discovery that puts her in mortal danger.

What Inspired You to Write Your Book?
I read a lot about rape victims, and how many of the men responsible get away with it. I wanted to write a book about what the victim has to go through, and it can ruin their lives forever.

How Did You Come up With Your Characters?
Most have just come from my imagination, but some have characteristics of people I have known in my day to day life.

Book Sample
EXCERT FROM AGAINST HER WILL FIRST CHAPTER

Author Bio:
Born and bred in the West Midlands, Martin writes under the pen name of Peter Martin. Against Her Will is his debut novel, and is the story of one young woman’s fight to lead a normal life after a horrific rape.
Martin’s interests lie mainly in crime, suspense and thrillers. His favorite authors are diverse, including Robert Goddard, R J Ellory, Kate Mosse,Dean Koontz, Stephen King, Diane Chamberlain, Harper Lee,Wilbur Smith.