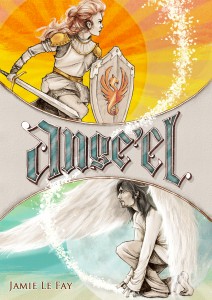 Morgan arrives in New York, where she is speaking about her Hope Foundation at several high-profile events. When she finds out that her life is at risk, she is not sure whom to trust—disoriented by an intense attraction to a very charming and controlling Gabriel, she attempts to regain control of her life only to find herself in the middle of a war between different factions of an ancient civilisation. The people of Ahe’ey hold the key to the future of humankind within their genes. To unlock it, Morgan and Gabriel need to help them move beyond the medieval rules that are holding them back. The price of failure may be the end of the world.

What Inspired You to Write Your Book?
From as young as I can remember, I have soothed myself to sleep by imagining epic stories of heroes, heroines, sorceresses, dragons, angels, and devils. I based my stories on the books and movies I was watching and the narratives that moved and inspired me.

I was as excited and delighted with Pride and Prejudice and Jane Eyre as I was with Battlestar Galactica (the original TV series). The Mists of Avalon, an Arthurian legend retelling from the point of view of the female characters, had as much effect on me as Cosmos by Carl Sagan.

I imagined myself occupying the boots of the hero as much as I occupied the glass slippers of the damsel in distress. The first one was what I wanted to be; the second was what society wanted me to be, and I believed them, for a little while.

How Did You Come up With Your Characters?
As I grew into adulthood and discovered quite late in my life the welcoming arms of the feminist movement, I went through all stages of grief, including rage: rage for the status of women and girls in the world and rage for the violence, the rapes, and the lack of access to food, education, and safety. Fortunately, rage does not last long in the body of a creative optimist and I could now identify with Kara “Starbuck” Trace and Ripley, I now understood it — rage. I know there are better characters out there to exemplify these feelings, but this exercise is about my truth and what pulls the strings of my heart and mind, and the mercurial Startbuck, is, in my inner world, a good representation of strength that is rooted in rage.

As I gained the courage to write my own fiction, I was conflicted. I knew my imagination and power came from my truth, but I also knew I needed to honour the millions of voices that are screaming for better media and better representation of minorities. I am one of those voices, dissecting each new book and movie, criticising the stereotypes, the common places, and the limiting depictions of gender, race, and sexuality.

This book was a great teacher that opened my eyes about how difficult it is to write engaging fiction and do justice to the people of the world. Can a Western, Caucasian, European woman really do justice to diversity beyond gender? Can she avoid creating villains and heroes that do not fall into stereotypes and common places?
Ange’el – Sky – Yi’ingo Warrior
In the end, I have done my best to honour the world while being true to myself and to the characters and stories that inspire me. To be able to pour my heart out, I had to let go of what I should be feeling and writing. I had to embrace my flaws and my inner demons. I have worked hard to express the values and virtues that I aspire in myself and in others and similarly, acknowledge that, as a white heterosexual woman, I cannot and should not attempt to express in detail the feelings and emotions of minorities that I don’t belong to. I attempted to approach race, gender, and sexuality with empathy and compassion while accepting my fallibility. I had to seek to understand the villains and to portray them with as much compassion as I portray the heroes. I am terrified knowing that seeking to understand is the first step to acceptance. I acknowledge that there are evils and actions that we should never ever accept. What an interesting fault line to dance on.

So that is all, what is left is a story that fully embraces everything I love and care about: feminism, romance, friendships, social justice, environment, science, innovation, art, and economics. I found a big old pot, put in a number of archetypes that have inspired the imagination of people from the beginning of times, and mixed in the story lines and characters that have inspired me throughout my life. I seasoned it all well with social consciousness and the life lessons that have made me grow as a human being. I fully embraced my geekiness and my romantic heart. I have submitted to my, sometimes overwhelming, idealism—the idealism that keeps my fire burning, the idealism that gave me the courage to write this book.

Book Sample
“She believed in magic—the magic of places, the magic of people, the magic of coincidences, serendipity, and fortune. She enjoyed wandering through the world with the open mind and curiosity of a four-year-old child, where the mystical, mythical, and magical inhabit the same space and time as the ordinary and the practical.”

“The copper-haired beauty was like a free and spirited stallion that would never be tamed. Intimidating, unapologetic, and beautiful, all strength and power. The security men could not help but look at her. She was sexy, sexual, and they wanted her, but her despise and disdain was evident.”

“For the first time in a very long time, Gabriel closed his eyes, smelled her hair, and became lost in the moment, that moment where he allowed himself to be just a man falling in love, a moment he would later regret.”

Author Bio:
Jamie Le Fay is the author of Ange’el, her debut novel. She was born in Europe and spent her early adult years traveling around the world working in information technology before she left the corporate world to focus on her passion: empowering women and girls. Jamie lives in London, UK where she is involved in a variety of initiatives that hope to contribute to the safety, wellbeing and education of girls globally. Jamie is an accomplished writer and speaker that focuses mainly on topics related to girlhood, feminism, gender equality, and the misrepresentation of minorities in media and marketing.

Links to Purchase eBooks
Link To Buy Ange’el On Amazon