You are here: Home / Mystery/Suspense / Dead Like Me by Kelly Miller @MillerMystery 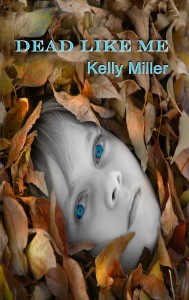 On edge after a two-week mandatory leave, Homicide Detective Kate Springer is blindsided when she discovers she shares a link with Tampa’s newest murder victim. A troubled teen found strangled and dumped in a remote part of town. The bond between them threatens to expose Detective Springer’s past—a past she’s been hell bent on keeping secret. When the killer finally emerges from the shadows, Kate’s secrets aren’t the only thing on the line. So is her life.

What Inspired You to Write Your Book?
Having the victim and the case detective look alike isn’t a new idea. But I was inspired to create the Kate Springer character when I was at the park with my then two children. That day I saw a grandfather there with his granddaughter. There was an odd dynamic between the two. Now I’m pretty good at reading moods, and I could tell by the girl’s body language she was uncomfortable with the touch of her grandfather. I’m a mom. I know the difference between when a child is being moody and when something else is bothering them. This was definitely something else. I regret not striking up a conversation with the child but soon after they arrived, my son fell down, scraped his knee, thus ending our day out. I’ve never been able to get that little girl out of my head. And in my writer’s mind, she developed into something more. Eventually, I created a whole scenario around her thinking what her life would be like if she grew up the victim of childhood sexual abuse at the hands of her grandfather. Thus Kate Springer was born. I took it a step further, wondering what if Kate became a detective and one day looked into the face of a thirteen-year-old victim, realizing it was like looking into a mirror. What kinds of emotions would it stir up? Would the memories of Kate’s life at thirteen come rushing back?

How Did You Come up With Your Characters?
All of my characters are figments of my imagination. However, I do like to infuse some of my own traits into my characters. For example, even though it’s un-American to admit, I hate coffee. Just like Kate, I hate the smell so much I’ve never been able to even try a sip.

Taking a deep breath, I ducked under the yellow crime scene tape strung between two ancient oaks. Early this morning, a call came in from Thonotosassa, a small city bordering Tampa on the northeast side. Just on the fringe of our jurisdiction. Apparently, a neighbor walking his dog had discovered the body of a young Caucasian female.
Following the dirt driveway, I arrived at a vacant, single-story house. Scratch that. Make that a rotting, vacant house. The weather’s so different in Florida compared to where I grew up in the suburbs of Chicago. Up north the drastic temperature changes made paint peel away from the houses. Down here the paint stayed intact, but left unchecked, a black mold could devour a home. The end result was a place looking like the one in front of me—as if some disease was eating away at it. I estimated the house stood on two acres of land. Although there were neighbors on either side of the property, the trees surrounding it gave it a secluded feel.
“Welcome back, Detective Springer,” a chipper voice called from behind me.
Looking over my shoulder, I saw my partner of two years, jogging to catch up.
“Yeah. Great welcome present. You really shouldn’t have.” Snapping on my latex gloves, I wondered how much worse this day could get.
“Glad to see the shrink cleared you for duty.”
“Finished my last session this morning.” I assumed Dr. Grace would authorize my return to work today, but I’d stormed out of her office before I could work out the details. “A case is just what I need. Maybe I’ll finally be able to work the smell of bleach off my hands. I don’t think my bathtub can survive my staying home one more day.”
Detective Patrick Jessup chuckled and flashed a boyish grin. Probably trying to envision a domestic Kate Springer.
I hit the lottery in partner assignments. When I moved to Tampa, it took seven years of busting my ass before I saw a promotion. There were plenty of detectives who didn’t want a woman watching their back. Patrick wasn’t one of them. He had six sisters and often joked he was most comfortable in a room full of estrogen.
At thirty-five, Patrick still had that “all-American” boy next door look. His unassuming presence lent itself well to his profession. On more than one occasion, perps had underestimated Detective Jessup only to find themselves caged behind two-inch steel bars. With his good looks and chiseled physique, I used to tease he was probably the high school quarterback who married the prom queen. Got it half right. He was a star ball player at the University of South Florida until a defensive end cut his career short with a blitz that shattered his right kneecap.
It sounded like all the action was at the back of the property. Patrick and I walked around the house to the rear tree line where crime scene tech Lucy James was hunched over photographing a small mound. It was partially covered with sticks, brush, and decomposing leaves.
“A neighbor found the body before work this morning,” Lucy said. “Actually, his dog is the one who found it.”
Lucy stepped back and lowered her camera. I squatted to get a closer look. The leaves surrounding the girl’s right arm had been trampled. Her right hand lay exposed, palm side up. Her wrist revealed a jagged, double-heart shaped birthmark. Teeth marks surrounded her thumb, likely made by the dog who found her. With all the barking I’d heard since I arrived, I was surprised a whole pack of mutts hadn’t sniffed the body out.
The stench of death smacked me full in the face as the wind suddenly shifted. After all these years, I still hadn’t become accustomed to the smell. It was like taking a whiff from a partially sealed milk jug, one sitting outside in the direct sunlight for two weeks.
Lucy knelt beside me, bagging debris that would later be tested for trace evidence. Most of the leaves on and surrounding the face had been scattered from either the wind or the dog. I could tell the victim was female, but I waited for Lucy to finish gathering the last few stray pieces before the girl’s features could be seen.
Stifling a quick gasp with a fake cough, I lurched up and stepped away. “Sorry . . . I don’t want to contaminate . . . the evidence.” It was a weak excuse but all I could come up with.
After steadying myself, I glanced over my shoulder to make sure I’d seen correctly. Lying on the ground, face towards the sky was me at the age of thirteen.

Author Bio:
Kelly Miller lives in Tampa, Florida where her novels are set. She’s married, has three children, and a black Labrador named Gracie. Kelly is a proud member of the Florida Writers Association. She is also a contributing business writer for the monthly magazines, The New Tampa Neighborhood News & The Wesley Chapel Neighborhood News. Visit Kelly’s website at www.kellymillerauthor.com to find more information about the author, the latest giveaways, and a link to her weekly blog.