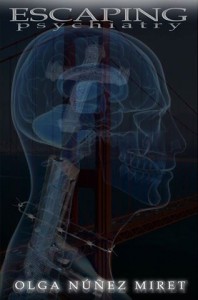 ‘Escaping Psychiatry’ has it all: intriguing characters, noir style, thrilling pursuits, dangerous situations, crime, serial killers, religion, family secrets, murder, psychological insights, mental illness, trauma, debates about prejudice and morality, heated trials, police investigations, corruption, and mystery. If you enjoy ‘Wire in the Blood’, ‘Cracker’ and ‘Lie to Me’ and you are not scared of going deeper and darker, dare to read on.

‘Escaping Psychiatry’ is a collection of three stories with the same protagonist, Mary, a psychiatrist and writer. She is trying to develop her literary career but circumstances and friends conspire to keep dragging her back to psychiatry.

In ‘Cannon Fodder’, Phil, a lawyer who and Mary’s friend asks her to provide a report on one of his clients, a young African-American man called Cain White. Cain is a very religious man and has been accused of inciting a riot at a religious meeting. He says he can hear God’s voice. He insists that God is black and his appears to be a Black Nationalist message. Is Cain insane, deluded, misguided, looking for media-attention, or a Saint? To find an answer to these questions Mary talks to his family and friends. Although she concludes he is sane,Mary’s investigation uncovers some very damaging revelations about his family life, beliefs and local attitudes. Who is a saint and who is a sinner is a matter for debate. The more Mary gets involved in the lives of Cain and those close to him the more she realises how dangerous secrets are. Like time-bombs ready to set off any minute.

‘Teamwork’: Captain Tom McLeod, from the San Francisco Police Department, invites Mary for a meal at home with his wife. When she meets their other guest, a young detective called Justin, she quickly realises there is an agenda well beyond a friendly meal. Justin’s partner, mentor and father figure, Sgt David Leaman, was killed a couple of months earlier during a routine investigation. Justin witnessed the event but he insists in going back to work and refusing any therapy or counselling. Tom and others at the department are concerned about his mental state but have failed to convince him to accept professional help. Both Mary and Justin are reluctant to engage in the ambush/informal consultation organised, but eventually decide to give it a try. At first sight it appears to be a straight forward case of unresolved grief, but things aren’t as clear-cut as they appear and Mary ends up getting too personally involved with the case, to the detriment of her professional objectivity.

In ‘Memory’, Mary runs out of her apartment after a difficult encounter with her friend Phil, and goes missing. When she is found it seems that she was hit in the head, abducted, raped and she is suffering from amnesia. She never recovers memory for the assault and finds it difficult to come to terms with something she cannot recall. The clues point towards a serial killer who could not finish his job in her case. But some things do not fit in. Who disturbed the killer? Why was she left there? The crime and the investigation surrounding it have a profound impact on Mary who decides that she needs to reconsider her life and start anew.

The epilogue revisits Mary at the point of the trial of her abductor and sees what changes have taken place in her life. Will she finally manage to Escape Psychiatry?

Although these stories are fictional, the author, a forensic psychiatrist, brings her expertise and insight to the material, lifting it above a standard crime caper.

What Inspired You to Write Your Book?
I’m a psychiatrist ( worked in forensic psychiatry for nearly 10 years until very recently) and I wrote the first story in the book ‘Cannon Fodder’ inspired by my studies in American Literature and the issue of race. I wondered what would happen if a young African-American man started saying that God was talking to him and He was black. Of course a psychiatrist would be called to assess his mental state and I had my protagonist, Mary. I shared the story with some of my professors who liked it but commented it was a difficult length to market and suggested I could write a couple of stories more with the same protagonist. I didn’t at the time but years later I re-read the story and thought the character of Mary was interesting and I wrote two more stories ‘Teamwork’ (more noir in style) and ‘Memory’ where Mary herself is the victim of a crime. I enjoyed writing the stories and decided there might be scope for further adventures and added an epilogue that opens the way for more stories.

How Did You Come up With Your Characters?
As mentioned above the main character, Mary, is a psychiatrist who’d like to make a living as a writer, but keeps getting dragged (reluctantly) to provide her psychiatric expertise in a variety of cases, mostly through her connection to a friend and lawyer, Phil, and his friends. Phil’s involvement in the cases grows throughout the book, and we get to know more about him, sometimes more than he seems to know himself. For the rest of the characters I usually start with a ‘what if’ approach to the story and a general scheme in my head about the characteristics of the character, but usually at some point they start to grow in their own direction and I follow.

Author Bio:
Olga Núñez Miret is from Barcelona but has lived in the UK for over 20 years.
She is a doctor and until very recently her day job was as a Forensic Psychiatrist (not exactly like the profilers in the movies, or anything to do with CSI either). She has now decided to dedicate herself more fully to writing, translating and all things book relate. She has also completed a degree in American Literature at the University of Sussex (including a year abroad at Mount Holyoke College in Massachusetts) and a a PhD on the Films of David Mamet. She was also teaching assistant whilst completing the PhD, mostly on Film courses.
Always a learner, she has recently finished a Distance Learning MSc on Criminology and Criminal Justice at the University of Leicester.
Olga has loved reading and writing since she was a child. Her father always says that even before she could read she’d always ask what any signs or writing meant. She has written a variety of things over the years: short stories (some now disappeared), novels, novellas and plays, in English, Spanish and Catalan. Some have been edited into the trash bin, but a few are still available and sitting quietly waiting for their moment in the sun. (Or an e-reader, most likely). Due to the many distractions (studies and jobs) she has never fully dedicated herself to the business of writing, but after a minor health scare she decided that there is no time like now. Carpe diem!
Her main love is fiction; she has written in a variety of genres (crime, family saga, para-normal, science-fiction…) and she is currently working on a series for young adults.
Apart from reading and writing, she loves the cinema, the theater (modern, classic, musicals…), fitness classes (and more recently also yoga), walking, crochet, and owls.
Her main aim is not to be boring and to entertain.
The first of her books to be published as e-book (October 2012) is ‘The Man Who Wasn’t There’ also available in Spanish version: ‘El hombre que nunca existió’.
In December 2012 she published 3 novellas in the series ‘Escaping Psychiatry’. ‘Cannon Fodder’ (Escaping Psychiatry Part 1), ‘Teamwork’ (Escaping Psychiatry Part 2), and ‘Memory’ (Escaping Psychiatry Part 3). The author has used her experience and insights in these three works of fiction that follow Mary, psychiatrist and writer, and her adventures.
In February 2013 she published a Young Adult novella in English (Twin Evils?) and Spanish(Gemela Maldad). This story talks about sibling rivalry taken to extremes, friendship, romance and has a touch of the paranormal.
In June 2013 she published my first foray in romantic fiction: ‘Click Me Happy!’ a novella where readers can choose between three endings, an unhappy, a neutral and an unhappy one. In October 2013 ‘Click Me Happy!’ became also available in paperback format.
In January she published the three novellas in the series Escaping Psychiatry in a single book with an epilogue that promises more adventures.
She is working on a series of YA novels, another romance, further adventures on the series Escaping Psychiatry and…many other things.