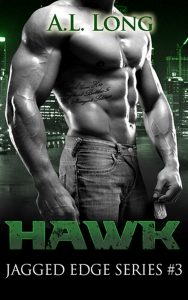 Escaping from the life she didn’t want, Paige Harper finds her way to New York to live the one she had always dreamed of. When her freedom is compromised, she turns to her trusted friend, Nikki Jennings, to help her. Reaching out to an old friend, Nikki lands Paige a job at Hell’s Gate. Situated in a small town in Oklahoma, Paige accepts the offer as a bartender where pretty much nothing happens, at least that was until she met Hawk.
The last thing Jayce ‘Hawk’ Talbott wanted was to set foot in Stillwater, Oklahoma again, but when his brother contacted him about their mother’s failing health, he had no choice but to go back. His only goal was to take care of whatever needed to be taken care of, leave, and never come back. The only problem was Paige Harper. He had to have her. There was something mysterious about her that him hooked and he was going to find out what it was, no matter what the cost. What he didn’t plan on, was finding out more than he bargained for, ultimately putting them both in danger. Will his need to have her win or will he lose her forever.