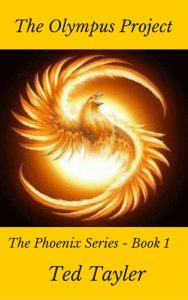 This is the first book in the series featuring ‘The Phoenix’, a man rescued from a watery grave by strangers. He has been headhunted because of his particular skill set; that of a super efficient stone-cold killer.
The stories throughout the series cover the activities of the secret organisation which recruited ‘The Phoenix’ as they send their agents across the world removing anyone who poses a threat to political or economic stability.
In this fast-paced thriller, we follow ‘The Phoenix’ as he exacts revenge and rights wrongs in his inimitable style. ‘The Phoenix’ has always been a loner; can he and his new colleagues work together as a team to prevent a terrorist cell from causing havoc in Central London?