You are here: Home / Bargain Books Under $3 / First Ever Unhuman Bundle by Wilkie Martin 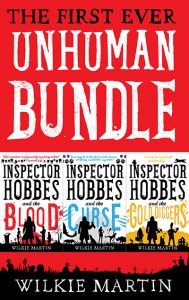 Escapism and crazy, quirky adventures in Wilkie Martin’s unhuman series. If you are looking for a new fantasy series or a light, funny read, then this unhuman bundle or collection will show why Wilkie has a cult following for his cozy mystery crime fantasies.
I – Inspector Hobbes and the Blood
Inspector Hobbes, a monstrous police detective, investigates grave, ghoulish, goings-on. A mad pseudo vampire with the dagger of Vlad Tepes is behind robbery, and murder. It is a funny tale with a troll, human sacrifice, blood and great cooking.
‘I ought to tell you, dear, he can get rather wild when he’s hungry.’

II – Inspector Hobbes and the Curse
Andy becomes infatuated with a dangerously beautiful woman during Hobbes’s investigations into sheep deaths and the mysterious disappearance of pheasants, which are apparently connected to a rash of big cat sightings; and something horrible seems to be lurking in the woods.
‘Love may be on the horizon but, beware; something wicked this way comes.’

III – Inspector Hobbes and the Gold Diggers
Unwelcome Attention after foiling an armed robbery forces the Inspector away on holiday to the dangerous Blacker Mountains, where his accident-prone friend. Andy stumbles across something shocking, before falling for an attractive widow.
‘I always knew you’d get ahead one day.’

What Inspired You to Write Your Book?
I watched a television programme in which Alan Titchmarsh, the presenter, was made up to look like a Neanderthal man. Afterward, dressed in normal clothes, he walked through central London and barely received a second glance. This gave me the idea that people who were not quite human could be living among us unnoticed. Seeing some of the customers at a video store made the idea seem feasible. I wanted to explore what might happen in a seemingly ordinary town if this were so.

How Did You Come up With Your Characters?
Inspector Hobbes came from the idea that ‘unhuman’ beings lived among us. I made him a policeman after noticing how people often see a cop but don’t see the individual behind the uniform or badge, which struck me as an excellent place for an ‘unhuman’ to hide. The character was an amalgam of various people, such as my grandfather and teachers who I’d liked but who I’d also found to be a little scary when I was a boy.
Since Hobbes was ‘unhuman’, I struggled to get inside his head and to know his thought processes. I tried a third person point of view but found the character was too distant. The way out of this was to use a narrator who I could understand, and who could report on Hobbes’s actions—in a similar way to Dr Watson narrated the Sherlock Holmes stories. This narrator became Andy Caplet, and his misadventures and failings became an important part of the book.
Sticking with the Sherlock Holmes theme, I gave Hobbes a housekeeper, Mrs Goodfellow, who is one of the few to understand Hobbes and to know something of his history.
Dregs, the big bad dog, just walked into the story and wouldn’t go away.

For joining the author’s email/newsletter list you will get:
Free download of Relative Disasters – A Little Book of Silly Verse by Wilkie Martin