You are here: Home / Fantasy / Forging of a Knight by Hugo Valentin Negron 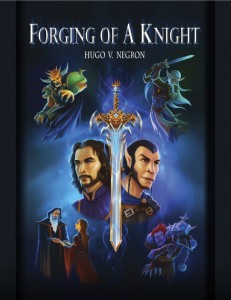 A battle against the forces of Those That Stand in Shadow brings an end to an old hero and a beginning for a new one. Together with a half-orcne thief named Glaive, a young warrior named Qualtan must battle through undead hordes, evil druids, shape-shifting maugs, hungry trolls and more on his journey to become a knight, learning in the process that good and evil are not always what they seem, and that friendship can sometimes go hand in hand with treachery.

What Inspired You to Write Your Book?
I’m an avid fan of fiction – specifically myths and fantasy – from Tolkien, to R.E. Howard, to Fritz Leiber, and to HP Lovecraft – heck, even Frank Baum and CS Lewis! When I was young, I was exposed to The Hobbit, books on King Arthur, Greek mythology, went to a couple of Medieval Fairs and never looked back.

Reading got me into writing. I started tinkering with writing my own stories, and gradually, developed what would eventually become the Forging of a Knight series.

How Did You Come up With Your Characters?
Although the stories are set within a backdrop of fantasy and magic, the evolvement of the main character focuses on areas all of us can relate to: growth, development, and maturity.

You have Qualtan, the main hero, who is somewhat innocent, naive, and sees the world in black and white. Then you have Glaive, a cynical, world-weary, sarcastic, suspicious thief of a certain race that is frowned upon. Starting off as enemies, they soon become close friends, helping each other see the world a bit differently from their own viewpoints, and thereby instilling growth in each other.

Each of the stories to date, and those coming up next, have dealt with certain aspects of Qualtan’s emotional growth, which correlates, I think, to what a lot of people go through in everyday life – hoping to live up to parents’ expectations, fearing failure in a chosen career, and then once you’ve achieved that comfort level in that career, hoping to excel/advance, to become the top of your profession, and wondering what to do next. The first book, Forging of a Knight, was mainly Qualtan’s attempt to prove worthy of his dad’s legacy and hoping he could prove worthy enough to become a knight. The second book, Forging of a Knight, Rise of the Slavekeepers, was more about now that he WAS a knight, would he be a good enough one, able to stand shoulder-to-shoulder with other knights? The third book, Forging of a Knight, Prison Planet of the Mah-Lahkt (coming out late summer 2014!) will see him testing himself as to whether or not he has finally excelled as a knight, to become a true hero.

You can add to all this a ton of supporting characters – the Arch Mages, great wizards of which Qualtan’s uncle is a member of, Those That Stand in Shadow, evil creatures bent on ruling mankind, and a bunch of others. There is a great female knight in book two that literally created herself and took the story into areas I hadn’t expected. It’s amazing when a character does that for you.

Ongoing throughout all this has been this fear (curse?) that Qualtan would end up losing everything: his sword, respect, his position, all of it. A few books down the road, he’ll finally find out for sure…

Book Sample
“I will prove worthy of my father’s name. I will wield the sword given to him, and make Aurelus proud. I will be a knight of Turinthia, a knight of the Alliance!” He lifted his enchanted blade and looked into its liquid-like finish, the perfection of its wrought form. Qualtan placed it atop a small table nearest a window and walked about the room. All past feelings of self-doubt were gone. The words of Arkonis Buckholm had emboldened him. It was time to move on, and he was ready. Self-satisfied, he filled a cup with water from a nearby pitcher. As he raised it towards his mouth, it was shot out of his grasp by a small, wing-tipped arrow!

Qualtan fell back in surprise, but as he reached for his sword, he saw a figure perched atop his window’s ledge, a newly fixed arrow pointed at him.

“Go for your weapon, and I’ll aim my next arrow to hit, not miss,” the cowled intruder said. Somehow, the voice sounded familiar, though Qualtan could not place it.

“Back. Go back! And keep your hands where I can see them!” said the figure, waving Qualtan to move away from where his sword laid on the table between them. Qualtan complied. The figure hopped inside the room. “Well, well! So we meet yet again, my paladin friend!” said the grinning half-orcne.

“I thought I knew your voice. You’re the half-orcne from Moresmouth,” Qualtan said, recognizing his opponent.

“The one and the same,” the half-orcne replied.

“I assume this is no coincidence, our meeting like this?” Qualtan said coolly, quickly appraising the situation. He wasn’t sure, based on the unique firing device on the orcne’s wrist that was pointed at him, if he could avoid the arrow. Nor could he gauge its lethality.

“You’ve led me on a merry chase, I’ll say. I tracked you through the river where you took passage to Flotsam’s End. The Buckholm Clan, eh? Nasty business, that. A few baubles here and there kept me apprised of your return.”

“You followed me?” Qualtan said with growing annoyance.

“Indeed I did,” said the half-orcne, eyeing Qualtan’s sword as he moved in closer.

“Perhaps to offer your thanks?” Qualtan said, folding his arms.

“Not much of a chance to offer thanks surrounded by a drunken mob, is there?” he said angrily.

“So offer it now,” said Qualtan.

“Thank you!” the half-orcne said with exasperation.

“You are welcome,” Qualtan said, lowering his arms. The half-orcne waved them up again. “Who are you? And why have you followed me?”

“I think my crossbolt gives me the right to ask the first questions,” the half-orcne said, pointing to his wrist gauntlet.

“And you probably never will. These devices are unique and are mine alone. Now! Who are you,
paladin?” he asked.

“I am no paladin,” Qualtan answered.

“Don’t play words with me! You are a paladin, all right! Who else would risk his life to rescue an orc?” he said.

“I know what I am! The question is what you are, so you better answer it!”

“My name is Qualtan. I am son to Eucradus, nephew to Aurelus, both heroes of the Great War.”
The half-orcne thought for a moment. “I’ve heard the names, I think. Before my time. What business does a paladin have in Moresmouth, and with the smuggling clans?”

“You seem rather anxious to know,” said Qualtan.

“Don’t dare me!” the half-orcne said, aiming his weapon.

Qualtan sighed. “I was given a boon by my uncle to travel to the Darklight Forest and confront an evil druid that lurked there in order to win commendation for entry into the Turinthian knighthood.”

“They owed my family a debt. They repaid it by providing me with travel to the druid’s lair.”

“Humph!” the half-orcne said, grabbing a box of smoking leaves and sniffing them with interest.

“Sounds like a wild tale to me. No one dares enter the Darklight Forest. The evil druid that lives there is whispered of in many places.”

“He lives there no more.”

“I don’t believe you!” the half-orcne said hotly.

“Then who do you think I am?” Qualtan asked.

The half-orcne smiled, showing his sharp fangs. He laughed aloud, shaking his head as he sat upon the table.

“I will play along with you. You’ve been hired by the merchant lords, and I know which one. They found out I returned, and you were sent to bring me back. You found out where I was hiding, and almost had me, except those swine at the inn provided enough interference for me to flee. Knowing of my doings with the Clan Lords, you went there to seek out information after I fled that night.”

“And you are…?” Qualtan intoned.

“Smart enough to know when I’m being taken for a fool. How did Thule find out about me? Quickly now!” the half-orcne said.

Qualtan shook his head. “I am not working for your merchant lords or this man you named Thule. I know nothing about you, or who you are, save for the fact you seem to be a rather ill-mannered lout.”

The half-orcne hissed at the comment, then as quickly relaxed. “Ill-mannered is all a half-orcne knows,” he said. “Thief, scoundrel, smuggler, robber, call me what you will. I’ve been all that and more. I’ve been trained by the best in these arts, for no other road was afforded me. I am no
fool.”

“You choose your own road. Some more difficult than others, but they can still be traveled upon.”

“Hah! More priest than paladin! What world do you come from?”

“I think not! You are a naïve sort of lad, I see that now.” Qualtan bristled at the comment. “Yes. You know nothing of the merchant lords, do you? Or life outside your rosy wizard’s home. Darklight Forest, eh? More true would be an errand to receive these trivials for your uncle. I’ve wasted my time. A good lad, playing the grocer. Going out into the nasty world to see what it’s like, eh, for a bit of fun? Go home, grocery lad. I’ll be lenient with you.”

“May I have my sword, then?” Qualtan said.

The half-orcne smiled as he rose from the table. “I think not. It’s quite a weapon, this is! Better in the hands of someone who can appreciate its value. The gems alone will fetch a good price. A lesson for you the next time you go outside to play…”

The half-orcne reached for the handle of the sword, and Qualtan stood at the ready, smiling inwardly. This was his chance. At the intruder’s touch, the blade immediately glowed red-hot and the surprised half-orcne let out a yelp of pain. He dropped the sword as it seared his palm. Qualtan outstretched his hand, and the sword flew into his grip. Holding his hand in sudden anguish, the half-orcne bolted out the window, with Qualtan in pursuit.

Author Bio:
Hugo Valentin Negron is an avid fan of myths, legends, and folktales. He grew up in Illinois where he still resides with his wife and son. His background includes an M.A. in clinical psychology from Roosevelt University as well as an M.A. in industrial/organizational psychology from the Chicago School of Professional Psychology.

He enjoys reading, biking, and walking winding trails through darksome forests, searching out the mystical beings that reside therein.