You are here: Home / Fantasy / Forging of a Knight, Rise of the Slavekeepers by Hugo Valentin Negron 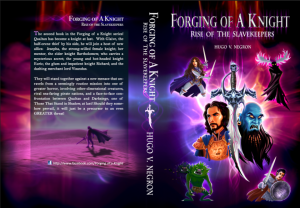 The second book in the Forging of a Knight series! Qualtan has become a knight at last. With Glaive, the half-orcne thief by his side, he will join a host of new friends: Jesepha, the strong-willed female knight; her mentor, the elder knight Bartholomew, who carries a strange secret; the young and hot-headed knight Euric; the glum and impatient knight Richard; and the dashing merchant lord Visandus. A seemingly routine mission will unravel into one of greater horror, involving inter-dimensional creatures, rival sea-faring pirate nations, and a face-to-face confrontation between Qualtan and Darksiege, one of Those That Stand in Shadow, at last! Should they somehow prevail, it will just be a precursor to an even Greater threat!

What Inspired You to Write Your Book?
I’m an avid fan of fiction – specifically myths and fantasy – from Tolkien, to R.E. Howard, to Fritz Leiber, and to HP Lovecraft – heck, even Frank Baum and CS Lewis! When I was young, I was exposed to The Hobbit, books on King Arthur, Greek mythology, went to a couple of Medieval Fairs and never looked back.

How Did You Come up With Your Characters?
Although the stories are set within a backdrop of fantasy and magic, the evolvement of the main character focuses on areas all of us can relate to: growth, development, and maturity.

You have Qualtan, the main hero, who is somewhat innocent, naive, and sees the world in black and white. Then you have Glaive, a cynical, world-weary, sarcastic, suspicious thief of a certain race that is frowned upon. Starting off as enemies, they soon become close friends, helping each other see the world a bit differently from their own viewpoints, and thereby instilling growth in each other.

Each of the stories to date, and those coming up next, have dealt with certain aspects of Qualtan’s emotional growth, which correlates, I think, to what a lot of people go through in everyday life – hoping to live up to parents’ expectations, fearing failure in a chosen career, and then once you’ve achieved that comfort level in that career, hoping to excel/advance, to become the top of your profession, and wondering what to do next. The first book, Forging of a Knight, was mainly Qualtan’s attempt to prove worthy of his dad’s legacy and hoping he could prove worthy enough to become a knight. This book, the second in the series, was more about now that he WAS a knight, would he be a good enough one, able to stand shoulder-to-shoulder with other knights? The third book, Forging of a Knight, Prison Planet of the Mah-Lahkt (coming out late summer 2014!) will see him testing himself as to whether or not he has finally excelled as a knight, to become a true hero.

You can add to all this a ton of supporting characters – the Arch Mages, great wizards of which Qualtan’s uncle is a member of, Those That Stand in Shadow, evil creatures bent on ruling mankind, and a bunch of others. Jesepha, the female knight, literally created herself and took the story into areas I hadn’t expected. It’s amazing when a character does that for you. As her character grew, so did Bartholomew, her mentor knight, and Euric, the knight that is ever pining for her hand. Initially these characters were mostly in the background – nameless, generic knights that had no real identity – but they fleshed themselves out, and added far more value to the story than first intended.

Ongoing throughout all this has been this fear (curse?) that Qualtan would end up losing everything: his sword, respect, his position, all of it. A few books down the road, he’ll finally find out for sure…

Book Sample
“How could you let that rogue touch you? You’ve tumbled over many a man who dared, including me!” Euric said, taking hold of Jesepha’s shoulder.

“My business is my own!” Jesepha responded.

“Surely you are not attracted to him?! He is a brigand and a scheming profiteer! Probably has more wives in more lands that you have fingers and toes!”

“Your opinion means little to me.”

“And what of your opinion of me?”

Jesepha sighed, pausing her step. “Euric…” She began to complain. He quickly put a finger to his lips, pulling her to a quiet alcove within the ship.

“We don’t have time for this.” She argued.

“Yes we do. I play no games this time. You know how I feel about you. I have attempted to court you…”

“As you have many a maiden back home.”

“Because you deny me at every turn! I have no choice! What is it? Why will you not honor me with a favorable response? For awhile I thought you had chosen Bartholomew…”

“Bartholomew? He has looked out for me, and mentored me. I love him as I would an older brother.”

“Euric, you are like a younger brother to me. You are kind, and despite your childish antics and annoying prattle, you are a true knight. I know your feelings for me, and I have done my best to dissuade you of them. I’m sorry.”

Euric’s eyes looked down. He frowned with sadness. He shuffled uneasily.

Jesepha could see his pain, and smiled sadly. She placed a hand on his cheek, staring into his eyes.

“Please understand, Euric. I love you as a good friend, but I cannot give you more.”

He took his hand and placed it upon hers.

“Then whose favor do you carry?”

“But surely matters of the heart have not escaped you.”

“I have not thought to concern myself with such things.”

“A horrid mistake! You cannot live by the sword alone! There is life to live, and parties to attend, and merriment to be had!”

Jesepha laughed at last. “I have enjoyed those things.”

This time it was Jesepha who seemed unsure of herself. “I am not closed to such matters. When the right man comes, I will know of it. Until then…”

“Until then! By that time you will be an old crone, creaking more than your armor! You aren’t getting any younger, you know…”

“Not getting any younger?!” She demanded.

“You demand too much! If you continue with your ways, you will never be happy and it will be too late to show a bit of lace on your leg!”

“You know I speak the truth!” Euric quickly interjected.

Euric watched her leave. He sighed, touching the side of his face where her hand had been. “Well done, you fool!” He said to himself miserably.

Author Bio:
Hugo Valentin Negron is an avid fan of myths, legends, and folktales. He grew up in Illinois where he still resides with his wife and son. His background includes an M.A. in clinical psychology from Roosevelt University as well as an M.A. in industrial/organizational psychology from the Chicago School of Professional Psychology.

He enjoys reading, biking, and walking winding trails through darksome forests, searching out the mystical beings that reside therein.