You are here: Home / Bargain Books Under $3 / Fortune by Katie Godman 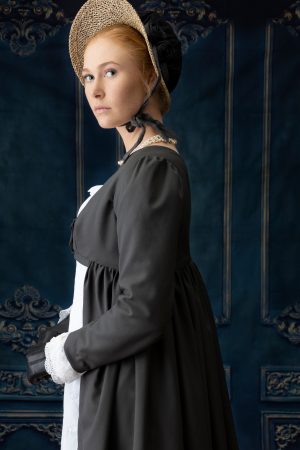 1800, Bristol.
Jessica is widowed and finds her husband was in debt. After losing the family hotel, she faces destitution along with her teenage daughters until her new acquaintance, Captain Parnell, offers her a role of landlady at his boarding house while he is away with the navy.

Jessica’s youngest daughter, Amelia, becomes a companion to the frivolous Mrs Betsey Webster. It’s not long before Amelia is caught up in Betsey’s giddy world of parties in Bath and Brighton while two suitors: the friendly but illegitimate Lt Driscoll and his legitimate, wealthy half-brother, Charles Snowden, vie for her hand.

Lydia, the eldest daughter, yearns to help her mother and earn her keep. Had she been born a boy, she feels sure she could have trained as a surgeon…and she would be free to marry her best friend, Miss Thomas, the daughter of a local abolitionist.

Meanwhile, Jessica has established an increasingly affectionate correspondence with Captain Parnell. On his shore leave, Jessica and the captain grow ever closer, but can Jessica learn to love again after her husband’s betrayal. Is the Captain all that he seems?

A tale of rebuilding life after loss and shaping your own destiny.

How Did You Come up With Your Characters?
A few were very loosely inspired by real historical people such as Ignatius Sancho (a freed slave who was a grocer and abolitionist) and Dr James Barry (a woman who disguised herself as a man to become a doctor). Others come from visiting historical houses, especially kitchens and thinking of the people who would have existed there. I never intentionally base characters from living people but sometimes after writing see that they may have inherited traits from friends, family or even myself. I had the idea for some of the characters in Fortune over ten years ago, but after a break up of a long relationship and having no publishing success, re-imagined some of the characters in the context of needing to start again.

Book Sample
Chapter 1
Jessica
With a smile I poured myself some steaming coffee and sat down to savour its heady dark flavours. There was the calf’s head to boil, pastry to make and countless fruits and vegetables to pit and peel but there was plenty of time for that. For a few moments, I rested in silence, enjoying Amelia playing an aria on the piano in the empty dining room.
Amelia’s playing would have pleased my mother enormously – not that she was a lover of music, it was the owning of the piano that she would have derived pleasure from. For myself, I am pleased that Amelia has a hobby which makes her happy.
As I took a second sip of coffee familiar guilt crept up on me. She had been dead ten years, but I could still hear my mother’s voice telling me I had been idle long enough. There was work to be done. Maybe I wasn’t grateful enough for the business she helped me establish. And what about Peter, she would always demand. Was Peter happy? Peter was always happy. She used to say I must keep it that way for I had more to lose if his attentions wandered. That was true enough. Over and over again she would remind me, I should count myself lucky that he had chosen me.
I shifted in my chair. Maybe that was true enough once, twenty years ago, when we married…when he was a handsome man in his mid-thirties and I was fifteen. Without him, I would have gone into service as my mother had done, but with him I had servants of my own, a fine, flourishing inn and two lovely daughters. I breathed through my nose, trying not to get lost in my thoughts.
As Amelia’s playing continued the clock in the hall struck midday. Lydia was still at Mr Syrett’s, Peter was upstairs in his study. As for the staff, after the breakfast rush, the cook Laurence Wrenthorpe was at home, tending his sickly wife and the housekeeper Nan Forrester had finished cleaning the bedrooms, and gone out. Both would return later in the afternoon as we prepared for dinner, along with the waiters Billy and John, as well as Alice who cleaned up and washed dishes. Valancourt snoozed underneath his spit wheel, his furry legs twitching. The bell above the door chimed announcing guests.
I was on my feet, hair and dress smoothed, then out into the hall. Two gentlemen stood waiting for me, both naval officers, both almost handsome; one’s appearance was too fussy and the other had a prominent Roman nose. The fussy one had already set down a large trunk, whilst the other held a modest sized bag.
‘Good morning gentlemen, are you looking for rooms?’
The taller one, with the smaller bag and Roman nose, nodded. ‘Yes madam, but we have no booking.’
From what I knew about naval uniforms, his meant he was a captain and I would guess he was in his mid-thirties, about the same age as me. His olive skin and black hair gave him a continental look.
‘That shouldn’t be a problem,’ I smiled, opening the guest book. ‘Is it just the two of you?’
‘Yes,’ said the shorter, younger one. He was a dandy with an Irish accent and a lieutenant’s uniform. ‘Two single rooms if you have them.’
‘How long will your stay be?’
‘A week for me,’ said the dandy lieutenant.
‘I may stay a little longer,’ the captain said. ‘Depending when my business concludes.’
‘We have two single rooms free, though one is without a window.’
‘As long as it has a looking glass,’ the captain said. ‘Lt. Driscoll will be very happy with it.’
‘You see this cruel treatment I must put up with from my superior officers, madam?’ The dandy chuckled with a wink.
‘The one without the window is cheaper,’ I said and told them the prices for rooms and additional prices if meals were required.
‘Aha, then I shall be happy to take it. You see, Captain? I shall not be kept down for long.’
‘If I could just take your names…’
‘I am Captain James Parnell.’
‘And I am Lieutenant Dara Driscoll, at your service Mrs-?’
‘Mrs Fitzwilliam.’

Links to Purchase eBooks
Link To Buy Fortune On Amazon

Author Bio:
Katie Godman is a Costume Librarian who lives in London. She has an MA in Fashion History and a BA in Creative Writing. She has given talks on the historical fashion and writes book reviews for The Journal of the Association of Dress Historians. Her book on The History of Gothic Fashion is due out in 2022. Fortune is her first novel.