You are here: Home / Romance / Gracie Mae, A Story of Courage and Love by Donna Marie @fictionwoman 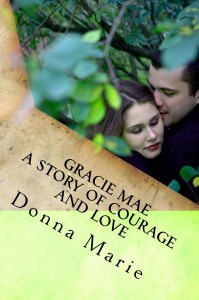 Gracie Mae escapes the madness of an abusive husband when she and her children, Ella 4 years of age, and Jacob, only 18 months old, move back to Gracie’s home town of Sanford, Illinois where they take shelter with her sister and fiancé, Greta and Frank. The attraction to Dr. John Azzari was immediate when a visit to the pediatrician office became necessary due to Jacob’s ear infections. As a receptive pediatrician, John sensed this family was running from something, or someone. When Gracie Mae confides in the gracious doctor, the magnetism between them is amplified to a new level.

Whenever Gracie finally felt she could live a life of happiness with her small children, her feelings of hopeful contentment were crushed by threats from her husband, Rich, which eventually became a horrific reality.

Targeted Age Group:: Over 18. Although, it is not inappropriate for younger ages.

What Inspired You to Write Your Book?
There isn’t a particular person or event that inspired me to write Gracie Mae. All of my books include believable characters, romance and passion, and true to life family issues. As for Gracie Mae, I wanted to add a twist by including a bit of suspense in the story, as well.

Who are your favorite authors?
Sandra Brown, Nicholas Sparks, and James Patterson

How Did You Come up With Your Characters?
The characters and story of Gracie Mae are fictional. After giving my characters a name, which is one of my favorite parts of writing, I begin to add personalities, strengths, and weaknesses. When completing this book, I became inspired to find a way of helping victims of domestic violence since Gracie Mae includes the horrors and ramifications of such cruelty . So, I have committed to donating a portion of my royalties to a shelter for families in need of safety, a warm bed, counseling, and whatever else is needed.

Author Bio:
While raising four sons along with my husband, my days can be quite engaged while also working full time for a local home healthcare office in a Chicago suburb. Whenever my diligent schedule allows a spare moment, I spend that time writing as a freelancer for various marketing companies or composing upcoming novels. Other favorite pastimes of mine include reading, glass painting, cooking, and spending time with my family.

When reading one of my novels, it is obvious that my main writing objective is to create credible characters with believable stories. Such writing is tailored to include relatable family issues, as well as heartfelt love and genuine passion.

Links to Purchase eBooks
Link To Buy Gracie Mae, A Story of Courage and Love On Amazon