You are here: Home / Action & Adventure / Hostage to Freedom: The Search for the Siren by Richard Sorapure 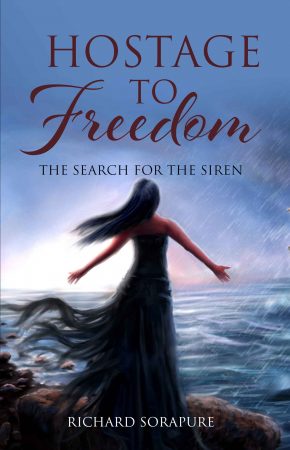 How Did You Come up With Your Characters?
My characters are imaginary, but based on an assemblage of character traits from many interesting people I have met.

Book Sample
On a balmy day near noon on Tuesday, February 14, 1764 the East Indiaman ‘The Siren’ came to grief on Brutus Reef in the Sulu Sea.

As the ship sat upright on the seabed, the sand waves into which she fell first cushioned her fall and then entrapped and buried her. Within a few years, trains of dunes hid the last traces of the Siren and her valuable cargo. The skeleton of the teenage apprentice stared out blindly from his crow’s nest, and fish flew into his gaping mouth and left via the open eye sockets.
The main mast stuck a defiant finger and the uniform of the boy shrank over his bones, flakes of his red shirt danced in the current, the bright colours shimmering as shafts of sunlight pierced the waters. At last, masthead and the apprentice fell in a graceful arc to a seabed repose, and sand and coral encrusted his skeleton.

Onboard a rich cargo of 250,000 cases of Ming Dynasty porcelain lay buried until a diver recovered a single plate in the mid 1980s.

Links to Purchase Print Books
Link to Buy Hostage to Freedom: The Search for the Siren Print Edition at Amazon

Links to Purchase eBooks
Link To Buy Hostage to Freedom: The Search for the Siren On Amazon

Author Bio:
Richard Sorapure is a marine geologist and geophysicist who has worked all over the world, mainly on short-term projects for civil engineering, government and oil and gas companies. From 1983 to 1994, he was based in Singapore where four of his five children were born. During this time most of his projects were in Indonesia, Malaysia and Singapore, with occasional forays further afield to India, the Middle East , Taiwan, Thailand, Australia and New Zealand.
‘Hostage to Freedom: The Search for the Siren’ is Richard’s first published novel, released in June 2021. It took 10 years to complete and is based on his experiences in Singapore and the Philippines and, with artistic licence, it has weaved in a dramatic attack on his survey vessel, MV Askelad, offshore Nigeria by an armed gang of twenty pirates. Two of the survey team were taken hostage. Nowadays he is happy to concentrate on writing a second novel and concentrating on gardening back home in his home in Somerset.