You are here: Home / Poetry / Like A Box of Chocolates by Justin Bienvenue @JustinBienvenue 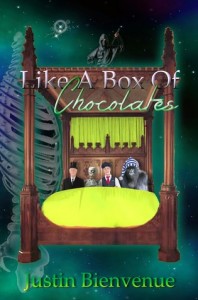 Take every notion, feeling, experience and expectation that you have on poetry and throw it up in the air, just take everything you’ve ever known about it and toss it aside. Not because the boundaries of what makes it so are being broken and not because simple fundamentals and poetic structures are being altered, no that’s not it at all. Simply take a deep breath, relax and remember that nothing is off limits, nothing is too right or too wrong or completely outside the box(pun totally intended). So untie that bow, put your hand on the corner and open..open the book and take in that fresh page aroma and all the splendid “flavors” that is poetry.

What Inspired You to Write Your Book?
I wanted to write another book of poetry after my first book and dipping into a full fledged book with my second. After playing around with titles that I had friends and family pick on Facebook I decided to write this book. I originally intended to just have these titles become poems but after about 20 new poems I decided that these should be shared for all to be enjoyed and made into a book.

Who are your favorite authors?
Edgar Allan Poe for sure. I am a big writer of horror and horror poetry so many of his stories such as The Raven and The Masque of the Red Death were stories I always read. Stephen King, whats not to enjoy about King? His books have been made into movies and many authors inspire to write as good of work as him. Elmore Leonard, I love the way he creates his characters with pop and attitude and have read several of his books all of which I could not seem to put down.

How Did You Come up With Your Characters?
Well since it’s poetry only certain poems have characters. Some of the characters are well known and others just regular type of figures. For a poem such a Killer Instinct I thought about those two words and came to the idea to write about Jack the Ripper, For Prisoner of Lust I looked deep into the definition of Lust and came up with writing about Casanova. There are other characters in other poems to which I basically thought about by looking deep into the meaning of the title words and playing off them and creating a poem that surrounded them in some sort of way.

Book Sample
From the poem, Prisoner of Lust

Into his trap of deceitfulness
Their hearts under lock and key

Author Bio:
I am an author and poet… Always enjoy meeting eager readers and fellow authors alike. I graduated high school and got my diploma in 2006. During my freshman year I really found my appreciation for writing. As an author and poet, I have two previously published books, A book of Horror Poetry entitled The Macabre Masterpiece: Poems of Horror and Gore published in 2010 and a Western Horror A Bloody Bloody Mess In The Wild Wild West. Aside from poetry I have also started writing narratives, short stories and have even tried flash fiction. Writing to me is an enjoyment not a job, I feel as though the minute it feels like a job that perhaps it should be time for a break. I have a background in creative writing from H.S which has definitely helped along the way and gradually helped me in my thinking and writing process.