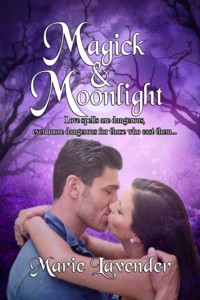 Messing with free will is always a bad idea…

Ethan Hamilton moves to a lazy little town in Oregon, hoping to escape his demons. But, instead he discovers a woman dancing nude in the moonlight. This woman who claims she is a witch dazzles him with her sensual presence. He thinks she’s crazy, but what if she’s not?

Jessie Anderson has been taught that her kind hides who they really are. And she has a problem on her hands. Someone knows her secret and she has to do all she can to protect herself. What other choice does she have? Jessie casts a love spell on a good man, a man with whom she can’t fight her attraction. The spell doesn’t work quite as planned – she ends up falling for Ethan.

To top it off, Ethan’s treatment of her, his “love”, is so addictive. Deep down, she knows the spell will wear off, and yet his feelings seem genuine. It’s just a spell…right?

What Inspired You to Write Your Book?
I came up with the title first. After that came the first image of the hero walking along the shore.

How Did You Come up With Your Characters?
They just came to me. Jessie became a pretty complex character, trying to hide who she really was from the public eye, and Ethan was a cop. I just had to fill in his background a little. He came into his own as the story progressed.

Book Sample
“Is there a reason I found you naked out there? I mean, you lost your clothes somehow, right?”
The secret smile she gave him made his throat feel dry. “Do you want me to lie?”
“Of course not.”
“The ritual was best practiced in the nude. Skyclad rituals are very common, you know. The Goddess tells us, ‘You shall be free from all slavery, and as a sign that you be truly free, you shall be naked in your rights.’”
He lifted a brow. “Even if that were the case, you didn’t walk there naked, did you?”
“Didn’t I?”
Maybe she was crazy after all.
“I didn’t walk at all.”
He thought she might be saying that she was transported by magic. Yep, she was batty as hell. He was so not touching that one. He cleared his throat again.
A sharp cry startled him and instinctively, he reached forward and grabbed her when she started to fall. Unfortunately, she ended up right in his arms.
Or maybe it was fortunate after all. With her luscious lips so close, he could almost taste her. And her scent…dear God, she was intoxicating, like a mixture of night air and jasmine. “You all right?” he managed.
She nodded. “My foot caught on a rock, I think.”
“Is it bleeding?”
“My foot or the rock?” Her cheek dimpled.
He laughed. “Your foot, of course.”
“No, I don’t think so. It’s all right.”
“Good.” He realized his mistake immediately. Some strange instinct caused him to keep her close. Stepping back would be a crime and she was seductive. Knowing she was naked underneath his coat didn’t help anything. She was way too accessible. Heedless of the costs, he plunged a hand into the soft waves of her dark hair and lowered his mouth to hers.
She tasted like wine, potent and sweet. He explored her mouth slowly, allowing her the chance to pull away or slap him. He knew he’d deserve it. He’d never stolen a kiss before, and he couldn’t think why he’d done it now. But, she tasted delicious. And her body felt so good against his. He groaned and drew her closer. When she moaned in return, he kissed her deeply and moved a hand down her back. His hands wanted to roam further, but he held himself in check. If he was a real gentleman, he’d pull away now.

Author Bio:
Bestselling author of UPON YOUR RETURN and 17 other books. Finalist and Runner-up in the MARSocial’s Author of the Year Competition. Honorable mention in the January 2014 Reader’s Choice Award. Liebster Blogger Award for 2013. Top 50 Authors on AuthorsDB.com. Winner of the Great One Liners Contest on the Directory of Published Authors.

Marie Lavender lives in the Midwest with her family and three cats. She has been writing for over twenty years. She has more works in progress than she can count on two hands.

At the tender age of nine, she began writing stories. Her imagination fueled a lot of her early child’s play. Even growing up, she entered writing contests and received a certificate for achieving the second round in one. She majored in Creative Writing in college because that was all she ever wanted – to be a writer. While there, she published two works in a university publication, and was a copy editor on the staff of an online student journal. After graduating from college, she sought out her dream to publish a book.

Since then, Marie has published eighteen books. Marie Lavender’s real love is writing romances, but she has also written mysteries, literary fiction and dabbled a little in paranormal stories. Most of her works have a romantic element involved in them. Upon Your Return is her first historical romance novel. She just released Magick & Moonlight, a paranormal romance. Feel free to visit her website at http://marielavender.webs.com/ for further information about her books and her life. Marie is also on Facebook, Twitter and LinkedIn.

A list of her books and pen names are as follows:

Erica Sutherhome: Hard to Get; Memories; A Hint of Scandal; Without You; Strange Heat; Terror in the Night; Haunted; Pursuit; Perfect Game; A Touch of Dawn; Ransom; Leather and Lace