You are here: Home / Fiction / Major Jazz by Niyah Moore 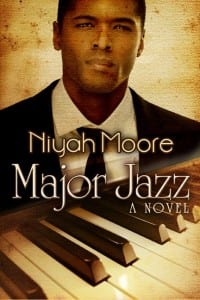 “Our heated passion created some of my best compositions, but I was cursed with my daddy’s blood.” Major Ingram knew better than to get into a committed relationship. As much as he witnessed the heartbreak his father inflicted upon his mother, he didn’t want to make the same mistakes. When his father finally walked out on them for good, his mother was broken. Something he saw and she felt for years. Major didn’t want to hurt any women that same way, but it seemed as if he could never tell Sallie Aquino he loved her because there was only one her and that was his music. Major’s father was a saxophone player who played the blues. He spoon-fed Major the love of music from the first day he opened his eyes to the world. Though the sax was in his blood, Major fell in love with the ivory and ebony keys the first time he heard a piano. Major developed his own passion with jazz music and by the age of sixteen, he had landed a paying gig at Bop City, an after hours nightclub in Fillmore. Fillmore, the ‘Mo, was like Harlem on the bay. Sammy Davis Jr., Ella Fitzgerald, Dinah Washington and Duke Ellington all fell into San Francisco the way they had in the Big Apple. Back in ’51, the Victorian styled homes, housed finely dressed black people who owned their own businesses from cleaners to restaurants to jazz spots. They worked mornings during the week and enjoyed local and celebrity musicians at night. Up and down Fillmore Street, clubs and restaurants lined up one next to the other. On Friday nights, they went from club to party to bar until the early hours of Monday while music played nonstop. Loosely based on true testimonies, the Fillmore Jazz Era comes back to life through the fictional characters: Major Ingram, Kae Taylor, Sade and Sallie Aquino, and Frank Blue. They made jazz heartfelt through their own stories. This love story just isn’t about falling in love, but how they each fell in love with a neighborhood, a scene and her, jazz music. The Fillmore Jazz Era is gone, most of the neighborhood was torn down by the Redevelopment Agency by the 1960’s, but it’s not forgotten, and the love for Bebop, Jazz, R&B, and Blues music that once existed remains in the heart and soul of Fillmore forever.

What Advice Would You Give Aspiring Writers?
Don’t get discouraged when rejection comes your way. Stay true to your craft and find out everything there is to know about publishing before trying to do it on your own.

Author Bio:
Born and raised in Sacramento, California, Niyah Moore was touched at an early age with the precious gem of prose. At the age of nine years old, she participated in a Writer’s Workshop and displayed a special knack for writing that sparked a flame for a romance between Niyah and storytelling. Before finishing high school, she had completed five novels, wrote three school plays, and had written a play for her church. No small task for someone in high school; yet she pulled it off with ease. A childhood hobby developed legs of its own as she matured into an adult. Niyah listened to her calling, finding the time to write in the mornings while raising her family. Under the subtle pushing and guidance of a literary mentor who was well known in the literary industry, Niyah decided to pursue a career in writing professionally. She submitted a short story to the Mocha Chocolate anthology in 2008 and was accepted as a contributing author. Inclusion in that literary work gave her the courage to submit to various others and a literary journey for her began to take form.
One leap of faith jumped into several acknowledgments of talent. Her works include novels, Guilty Pleasures and Bittersweet Exes; and inclusions in several Award-Winning and Award-Nominated anthologies such as: the 2012 AALAS nominated anthology Heat of the Night, 2008 AALAS winning Erotic Anthology Mocha Chocolate: Taste a Piece of Ecstasy Anthology . Niyah’s short story “After Dark” will be included in the anthology, Zane presents Busy Bodies: Chocolate Flava 4, releasing in the Summer of 2013. Niyah is a mother of two, who loves sharing her love for words with the world and who looks forward to the publication of her new novel, Major Jazz, which is scheduled for release under her new publisher, the Award-Winning Independent Publisher of the year, Peace in the Storm Publishing.

What Inspired You to Write Your Book?
I moved to San Francisco’s Fillmore and living there, I found out about the Jazz Era. Just walking down Fillmore Street inspired me.