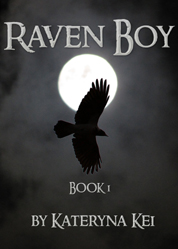 The Viking king is killed and his widow is called to suggest to the council a worthy successor, able to win the raging war.

Torn between her feelings and her duty to choose the best for her people, she decides to seek the divine guidance and goes to see the rune caster.

But the message of the Gods is weird beyond belief: it says that the only person who can win the war is but a boy, the youngest of her twin sons, Hrafn.

The rune caster’s predictions have never failed yet, and suddenly the queen has another problem to worry about – the second part of the prophecy promises the boy something much more dreadful than death on the battle field…

What Inspired You to Write Your Book?
It is hard to name just one concrete thing. Several real life situations, books like Harry Potter and Penrod, and incredibly boring school lessons that offered so much time that just had to be filled with some sort of productive activity.

How Did You Come up With Your Characters?
It was the year of my graduation from school. I was sitting through an exceptionally boring lesson, yawning and counting minutes, that were mercilessly stretching into what seemed like an eternity. It was this ultimate state of boredom when you don’t want to read, nor to write, when you don’t want a thing, not even stuff that you normally enjoy doing. And as I was craving some sort of distraction that was never coming, I started to invent it to myself. I started imagining situations and people that could chase away the boredom of the lesson. And that’s how my characters were born…

Book Sample
His father’s sword at the ready, he walked back to the flag.
“Stay calm and try to save your strength!” hurriedly advised Sveinn from behind, and Hrafn desperately clung to these words.
To say he was scared was an understatement. He was so petrified, that even moving his feet was an incredibly tough task. He was honestly regretting his foolish bargaining, but it was too late to turn back. The agreement was sealed. He wished that Sveinn would have given him more lessons, or that he would have been older, or, at least, that less were at stake.
Hrafn knew he was walking towards his death. Paralyzed by fear, he had the most horrible feeling in the pit of his stomach as he was fighting back his instincts and moving forward, when everything in him screamed for running away. […]
Knowing what was about to come, the raven bird uttered a heartbreaking, sorrowful croak from high above. But Hrafn didn’t look up. The raven had a special task – to inform him when everyone was ready – and Hrafn had his own. His death was standing by his side, and he had to make it linger for several life-long minutes. Only several minutes, that was all. Then his task would be over and he would be out of the game forever. He was named konungr to win the war, and he had to do so by any possible means. Well, it wouldn’t be exactly him who would win, but then it didn’t really matter.
The end was so irrevocably close, that he could no longer tell whether he wanted it over faster, or whether he wanted it to
7
last – just to live a bit longer, to steal a couple of minutes, or seconds, from death itself.
He had never been so much aware of everything around him – the heat, the air, the burning sun, the dry land and yellow grass, people’s stares fixed upon him, his raven flying somewhere above it all… Hrafn was about to leave it all forever and it seemed impossible and ironic, but so frighteningly real.
Forcing his heavy feet to move, he tried to concentrate on the battle. It was crucial for the success of their foolish plan. But suddenly it seemed too hard. Hrafn’s whole body was uncontrollably shaking under the pressure of responsibility and the anticipation of the fight.
He stopped in front of the Foreigner who adjusted his long metallic shield, mockingly smiling down at him. Hrafn barely reached his waist!
“Did you hug everyone good-bye?” teased Ulfrich. Chortling with amusement, he added, “Listen everyone! I also swear that if this baby kills me, he will be granted the allegiance of every warrior of mine and every person living on my land!” He turned to his army and waved his arm. “Are you with me?”
The warriors responded with a unanimous approving roar.
Hrafn swallowed and added in a gruff voice, “If I kill you, it will be my pleasure to ride your horse. It looks unique…”
The king lifted up his sword, indicating the beginning of the battle.

Author Bio:
I am a dreamer and a restless traveler obsessed with Harry Potter and Irish dancing.
In between working in a theater and eating too much sweets, I write songs, poetry and fantasy books.
I love forest, long walks, especially on the beach, and reading while having a good cup of tea.
I hate strong smelly cheeses and waking up early.