You are here: Home / Buyer's Guides / Remember by Joan Carney 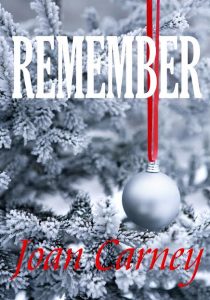 For most people, Christmas is a time of joy and anticipation. But when a freak accident robs Gracie of her memory, the lines between reality and fantasy blur. Now there’s only one gift Gracie wants for Christmas and the only man who can bring it, is not Santa.

Remember makes a wonderful Christmas story. It embodies the Christmas spirit in the faith the characters try to hold onto, the hope that each character keeps within their hearts, and the love that is just waiting for the characters to see. Jessica L. Quiethouse Editing

What Inspired You to Write Your Book?
Maybe I'm old school, but I still think of phones as speaking devices. So I'm amazed at the number of people I see walking the streets and the malls, concentrating on sending messages from their cell phones and ignoring their surroundings. We all know what happens when you text and drive, but I wondered what trouble a "walking texter" could get into. The crowded malls of Christmas seemed the best place to explore that avenue.

How Did You Come up With Your Characters?
I try to imbue my characters with traits of people I know, such as close friends and family members, or with observations I've made while doing my second favorite activity—people watching.
Gracie is a combination of several of these. Her strength and determination carry her through the tough times.
My favorite character, Jack, is a man I'd love to meet. Although I see him as attractive, he's not the typically perfect romance story hero. He's a warm, caring, everyday human who tries to always do the right thing. What's missing from his life is the love of a good woman.
Unfortunately, I think we've all met Todd. I fashioned him after someone who hurt me very deeply and who I hope to never see again.

Book Sample
GRACIE
“Medic 36 enroute St Joe’s with unconscious female approximately thirty years old, status post drowning. Two rounds of CPR given with restored pulse of forty-five and irregular. Current BP 78/52. One round of epi and .5mg atropine on board. And I got a liter of normal saline running wide open. ETA to your facility is less than five.”

The nearby bleating of sirens brought me to a vague awareness of my surroundings. I lay stretched out on a board, my arms, legs, even my head restrained and immovable. The rumble and whine of the engine told me I was moving… fast. What’s happened? Why am I restrained? Am I being kidnapped?

I’d read stories of women ripped off the street, forced into slavery. Oh my God, I have to get out of here. Panic crept up my spine and spread like wildfire throughout my body. My fingers itched to claw at the heavy mask covering my nose and mouth forcing air into my lungs. I had to get it off my face. It was smothering me. Somebody help me… please. But even my meager efforts to struggle against the restraints exhausted me and stole what little breath I had.

“Shhh, lie still.” A man’s soothing voice came through the fog and a hand rested on my shoulder. “You’re going to be okay now, Miss. We’ll be at the hospital in just a minute.” He reached to adjust the bag of fluids hanging over me and the site where the tube ran into my arm giving me a clearer view of his uniform. I’m in an ambulance. Why? Am I injured? Am I sick?

I fought the light headedness that made my eyes roll loose in my head like marbles. Disjointed thoughts and images swirled in my mind: a sea of grotesque staring faces, a pair of tender blue eyes, the rhythm of a heartbeat. The surreal feeling of detachment from my limbs made my head seem to float like a buoy. Jack, help me… Please.

Minutes later we slowed to a stop. The sound of the sirens wound down, and the rumble of the engine ceased. The ambulance doors swung open and a blast of frigid air shocked me to semi-consciousness. My bed snapped into position, wheels on the ground. Faces swam above me, their sudden flurry of incomprehensible words assaulting my ears and making my chest squeeze tighter.
Again I was moving, being whisked past the hiss of sliding doors. Fluorescent lights rushed by overhead as we sped down a long hallway, the shoes of my litter bearers squeaking on the tile floor. Staccato voices came at me from all sides, the sounds blending together, compounding my confusion. One man, louder than the others shouted orders. “Get me a CBC, Chem panel, ABG’s and a chest x-ray stat!”
Oh my God, everything’s moving so fast. This must be serious. What the hell happened? Can’t anybody hear me? Where’s Jack?

Through the turmoil, calm voices tried to soothe my panic as hands—strong yet gentle—released me from my bindings, lifted and settled me onto a narrow, hard bed. They made quick work of my clothes, stripping off what they could, then cutting off the rest, and replaced them with a light cotton gown. I heard the sound of Velcro peeling, stretching and the blood pressure device inflated tight as a vise around my upper arm.

A man’s face came within inches of mine, shining a bright light into my eyes. “Hi, I’m Doctor Raeber, you’re in the emergency room. What’s your name?”

My name, sure, I know my name. Of course I do. So what the hell is it? I groped for an answer that never came.

His forehead creased when I couldn’t come up with a reply, increasing the pressure in my chest as though an elephant had sat on it.

Don’t worry? Relax? Is he kidding? My scrambled brain tried to make sense of the situation, but I couldn’t connect the dots. Fitful tears leaked from my eyes and ran into my ears from the effort. I wanted to scream. I have no idea what happened. Please tell me why I’m here.

The doctor withdrew from my field of vision, but his voice still carried to me. “So you said she drowned? How? Where’d you find her?”

“At the mall of all places,” the voice from the ambulance chuckled. “A bystander said she’d been texting and not paying attention to where she was walking. She’d nearly mowed him down on the upper level a few minutes earlier. So when she tripped and did a face plant in the lobby level fountain, he just figured she was just a klutz. Until we showed up.”

“She must’ve hit her head pretty hard when she went down, that’s a nasty lump she’s got. Hey! Get me a CT scan with contrast, too,” Doctor Raeber called out.

“Yeah, I don’t think she was under long, though.” I heard the smirk in the paramedic’s voice. “The guy playing Santa at the picture kiosk said he saw her fall in and people just kept walking past as if it happens every day.”

“Right? So get this, he dumps some kid off his lap, runs over, and wades into the fountain in his costume to fish her out. He had one of his elves call 911, and by the time we got there he’d started CPR. Talk about a Christmas gift, Santa saved her life,” he chuckled. “You should’ve seen it, the kids all applauded, it was awesome.”

No, that couldn’t have been me. Someone please tell me that wasn’t me.

“Huh, I’ll bet.” Even the doctor was amused. “So who is she, did we get an ID? Is there anyone here with her who can give us her history?”

“No, her cell phone fizzled and died in the fountain. When we took over, one of the security guards was chasing after the guy who stole her purse. Can you imagine someone doing that? You have to be awful damn low to steal a purse from a drowning woman. But the police were just seconds behind us. Maybe they got something.”

Jack knows me, call him. Jack will come for me, I’m sure of it. He’d never let me drown in a fountain.

The doctor peered into my face shining a light into my eyes again. “How are her vitals?” He called out to someone standing nearby.

The heavy mask came off my face, replaced by plastic prongs set at the entrance to my nostrils. Each shallow breath I took in reminded me how much my ribs hurt.

“You’re doing great, Miss. We’re going to do a few tests and see what’s going on with you. Do you know if you’re allergic to anything? How do you feel? Can you tell me your name?” Back in my face, Doctor Raeber’s image distorted and pulsed.

“Jack…” An alien voice rasped and croaked from my mouth. Explosions of light behind my eyes made it hurt to blink. So much noise, so many people. I can’t be here. I want to go home. “Jack…”

“No clue. No one was with her that I could see.”

Out of the blue, I sensed water rising up around me, filling my nostrils, my lungs. I can’t breathe, I can’t breathe. Arms thrashing, my body writhed struggling to get free from the suffocating depth. But hands, many hands, held me down, keeping me under until darkness claimed me once more.

Under a swirling veil of gray fog, I drifted in and out of consciousness for what felt like years. The world swam past my dazed vision. People paraded in and out of the small room, some dressed in blue, some in white. All poking and prodding, invading my body with needles and tubes. Oxygen prongs still set at my nose, supported by tubes that circled my ears and wires attached to the cold tabs stuck to my body projected my heartbeat on a monitor in a hypnotic rhythm.

They talked around me as if I wasn’t there. Men, women, in easy discussions that meant nothing to me, continued their routine jobs without hurry. My weak cries for Jack went unheeded. I saw him though, sitting with casual nonchalance on the edge of a desk not six feet from me. He wore my favorite tailored blue shirt and matching Ted Baker tie, his suit jacket slung over the chair next to him. The lopsided smile that weakened my knees crinkled the edges of his sapphire eyes. It calmed me to watch him, gesturing to something behind him as he spoke. I didn’t care that his words, muted and garbled, never reached my ears or that his image flickered like a TV with fuzzy reception. It gave me something to hold onto.

After a while, the gurney released a rush of compressed air and the side rails lifted, bracketing me in a metal adult sized crib. A man in blue scrubs and a ponytail wheeled me away from the chatter and noise. He jostled me into an elevator then down a long hall to another small room. Voices lingered outside the door, but no one had come in yet. Left alone for the first time, this darker, quieter space prickled my nerves even more.