You are here: Home / Children's Fiction - Age 16 and under / Sounds Fishy by Lucas Salmon 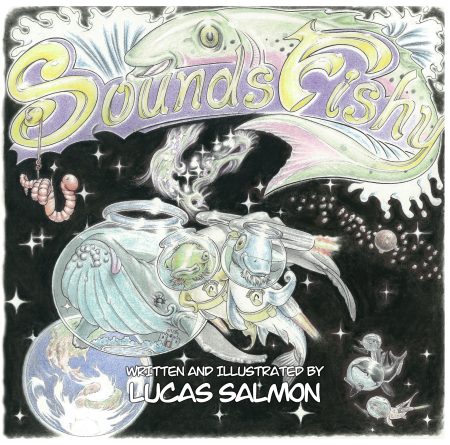 In the not too distant future, where astronauts are fish and cosmonauts are whales, there exists a space agency by the name of Rockhead Martian who have hired the best space patrol crew in the vast ocean of space. But the space patrol were more than just crew members, they were best friends. Best friends can conquer anything when they work together.

What Inspired You to Write Your Book?
My inspiration for the book was essentially just kicking around ideas, one thing rolling into another.

How Did You Come up With Your Characters?
For the characters, I drew direct inspiration from actual spacemen and women. The leader of the Space Patrol is a leader called Fuzzy Baldwin. This name was derived from the famed American astronaut Buzz Aldrin. Cally Wide from Sally Ride and Journey Grey Area is actually a derivation of Yuri Gagarin, the first man to complete a space walk.

Author Bio:
Lucas Salmon is an independent artist with over 35 years of experience in drawing and painting. These days he’s focused mainly on painting with watercolors. His style can be called “Realistic”, or “Photo-realistic”, depending on the subject matter.

In his early 40s, Lucas lives near the east coast where he continues to hone his skills as an artist, always seeking to improve his craft. Inspired by science and nature, he continues to experiment with different styles and subjects.

Lucas has found writing to also be rewarding. He has written, illustrated, and published his first book, ” Sounds Fishy”. He is now putting the finishing touches on his second book, “Smells Fishy Too”, the sequel. Both books were inspired by his great love for science fiction and remembered ideas from his childhood as he would create imaginative characters and worlds in his mind, just to keep busy!