You are here: Home / Mystery/Suspense / Stealing Jenny by Ellen Gable 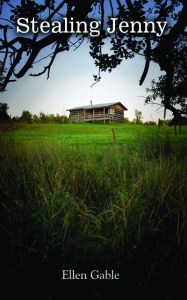 What do you get when you have a full-term pregnant mom with a dangerous medical condition and a mentally unstable infertile woman who is desperate to have a baby? “Stealing Jenny” is about Jenny Callahan, mother of five, who is hoping to have more children. After three miscarriages and some difficult moments during her current pregnancy, Jenny is only a week from delivery and feels like she is ‘home free.’ However, her neighbor is secretly hatching a plot that will put the lives of Jenny and her unborn baby in danger. “Stealing Jenny” by Ellen Gable is a faith-based suspense novel with over 330 four and five star reviews on Amazon.

“The Examiner” says: “It’s tightly written, nice and tense, complete with character studies, personal histories, and one of the better bad guys I’ve seen in a while.”

What Inspired You to Write Your Book?
I remember watching the news footage just after the Laci Peterson kidnapping. As someone who has gone through five C-sections and was not able to have a baby naturally for health reasons, I thought, “If I had ever been kidnapped while pregnant, I would not have survived.” That small seed of an idea became an entire story within a few months. I had only planned to write a short story, but it turned into a full length novel.

How Did You Come up With Your Characters?
Jenny (main female protagonist) has a lot of myself in her. Tom (her husband) is a lot like my husband. Other characters are amalgamations of people I have known and worked with and the villain in this novel came completely from my imagination.

Book Sample
As she approached the bus stop, Jenny noticed a woman there. “That’s odd,” she thought. “My girls are the only ones who get off at this stop. I wonder why she’s standing there.” Immediately, she became uneasy and looked away. “Stop it, Jen. This is Sutherland, a quiet neighborhood with virtually no crime rate.”
She continued walking until she could see her face. The woman was smoking and staring into the distance. As usual, the neighborhood was deserted until the kids returned home from school.
The lady looked familiar. She was tall, although slightly overweight. Jenny glanced at her middle and realized that the woman was wearing a maternity top. When Jenny moved closer, the woman finally made eye contact. “Hello, Jenny. How are you?”
“Uh. . .I’m fine. Are you waiting for somebody?”
“I’m waiting for you.” The woman dropped the cigarette on the ground and stamped it out.
“Me? Do I know you?”
“Uh-huh. I work at the Sutherland Veterinary Hospital.”
“Oh, right.”
“How’s Bootsie doing?”
“She’s fine, uh. . .”
“Denise.”
“Right, Denise.”
“I remembered that you were expecting pretty soon, right?”
“Yes. You too?”
“Uh. . .yes, me too.”
“When are you due?”
“Around the same time as you.”
“Oh?” Jenny’s large round stomach looked like it was a basketball compared to this woman, who appeared to be six months pregnant at most.
“Well, you know,” Denise continued, “my cousin’s got these maternity and baby clothes and they’re all high end stuff and I remembered seeing you and wondered if you might like them.”
“That’s nice of you, but don’t you need them?”
“I’ve already taken a bunch and these are the ones I won’t use. Come over here. I’ve got them right here in my car.”
Jenny thought the woman was a bit strange, and again, she felt uneasy, but she wanted to be polite. After all, she knew her from the vet’s office and she was pregnant. If you can’t trust a pregnant woman, who can you trust? “I guess it can’t hurt to take a look, but I’m almost ready to deliver and won’t be needing any maternity clothes.”
Denise walked quickly to a car parked close by, Jenny and Caleb following behind. She could see the woman opening up the back door and leaning in. She stepped back. “Right in there.”
Jenny lowered her head to peer inside. She couldn’t see clothes anywhere. All of a sudden, she felt something smashed against her face and nose. Breathing in a vaguely sweet scent, she jerked her head from side to side. She opened her mouth to cry out and inadvertently inhaled. She tried to move her arms, but she immediately went limp.

Author Bio:
Ellen Gable is the author of five books: “Stealing Jenny,” a contemporary thriller about a pregnant woman who is kidnapped; “In Name Only” (Gold Medal, Religious Fiction,2010 IPPY Awards), “Come My Beloved” (non-fiction), “Emily’s Hope” (IPPY Honorable Mention 2006) and the newly released, “A Subtle Grace.” The Kindle editions of her novels have been in the top 20 of the Religious Drama category since February, 2012. When not writing novels, posting to her blog or writing for a variety of websites, Ellen enjoys watching classic movies, reading fiction and playing board games with her family.