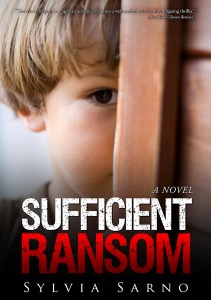 “The role of religion in tragic circumstances is given a well-crafted twist in this intriguing thriller.” –ForeWord Clarion Reviews

Ever wonder what it feels like to have it all—family, career, health, money—and not be happy?

Ann Olson takes her life for granted until her young son, Travis, disappears from the backyard one evening. Searching for her son, Ann throws caution to the wind. Soon, she finds herself enmeshed in the seedy world of Mexican drug dealers who operate just across the border in Tijuana. Does Ann, an atheist, embrace Christianity despite her husband warning that her pastor friend is more interested in converting her than in finding Travis? Does she make it out of the drug tunnel alive, or is her rashness her downfall? And is Travis’s disappearance related to that of other recently missing children in San Diego? A story of a mother’s love, courage in the face of evil, and her unexpected journey of self-discovery along the way.

What Inspired You to Write Your Book?
When I was a child living in Turin, Italy in the 1970’s, there was much talk of kidnapping. The heir to an oil fortune had been kidnapped in Rome. My parents talked about the situation a lot in front of me and my siblings. We were attending an American school and several of my Italian classmates were driven to school by their bodyguards. Years later, those impressionable times back to me and inspired the book.

Who are your favorite authors?
My favorite authors are Ayn Rand, Agatha Christie, Victor Hugo, Nevil Shute, Charles Dickens, Wilkie Collins, and I like Virginia Woolf too.

All of these authors have are responsible for depriving me of sleep at one point or another. Ayn Rand when I was younger. Agatha Christie even now.

How Did You Come up With Your Characters?
I know it’s going to sound like a cop out but they just came to me! The two main ones, Ann and Kika, however, underwent great changes in their personalities and their backgrounds as I honed the book.

Ann Olson and her six-year-old son were alone in the house. It was already dark.
“Mom, can you read the story again? Please. I have to make sure the bird finds his mother.”
Ann scooped up the book and placed it on the shelf next to Travis’s bed. Tucking the blue striped quilt around her only child she said, “I’ve read it three times. It’s time to go to sleep, sweetie.” She kissed her son’s freckled nose and stood up. “I’ll see you in the morning.”
“Mom?”
She knelt and caressed his soft brown hair. “What, honey?”
He pulled the blanket to his neck. “I’m scared of the dark.”
Ann bent over and kissed her son’s forehead, her voice extra soothing to mask her own anxiety. “There’s nothing to be afraid of. There’s no one here to hurt you.”
He didn’t look convinced.
“As you go to sleep, try to think of happy things like Legoland and the zoo. Think of the little animals we saw at the tide pools today. The crabs and those fuzzy sea creatures. What are they called?”
Travis’s eyes lit up. “The enemies!”
Laughing, she corrected him. “Anemones, you silly.”
Travis’s face grew serious. “Mom, I’m still scared.”
She stroked his head, smiling to herself. Her son’s bedtime stalling tactics were getting more sophisticated. “I’ll keep your light on,” she said, as she stood up. “And the hall light too. If you need me in the night, come get me, okay? For now, you need to go to sleep.”
“When will Dad be home?”
Her husband, Richard, was on yet another business trip—one of many every year—more than she cared to count. He had cancelled his last trip to Hong Kong in order to work out a plan with their lawyer to fight the charges Child Protective Services had filed against them. When Ann begged her husband to cancel this trip too, he said that if this new biotech start-up he had bet his career on was to survive, he had to go.
Ann tucked her son’s beloved rabbit by his arm. “Your father will be home in six days, honey. It’s late, Travis. You need to go to sleep.”
“I miss Dad.”
The very real possibility that her child could be taken from her and put into foster care, all because a misguided CPS agent got it into her head that Ann was a danger to her son, made Ann sick with apprehension. “I miss Dad, too.”
The truth was she was upset with her husband for leaving her and Travis to face CPS alone. In her saner moments Ann realized she was being unreasonable. Richard had major responsibilities. Defending his decision to go on this trip, he had echoed their lawyer’s assurance that CPS didn’t have a case. Well Ann knew that. Still, she couldn’t help feeling that her husband had let her down.
The doorbell rang.
Her body tensed. She wasn’t expecting anyone.
Travis’s eyes froze. “Who is it, Mom?”
“Probably some salesman.” She tried to sound unconcerned so he wouldn’t worry.
The doorbell rang again.
She tousled her son’s hair. “I’ll be right back.”
Ann stepped onto the landing and looked over the wrought iron railing. The entrance hall below was dimly lit from the outdoor lights that had come on when the visitor stepped up to the door. The wind pushing the vertical blinds in the family room at the back of the house made a slight rustling sound.
Her hand came to her mouth in anxious surprise. The shade by the window next to the front door was up. Usually when Richard was away she had the house battened down for the night, way before dark. Tonight she was so caught up with Travis that she hadn’t noticed it getting late.
Ann hurried down the stairs hoping to get to the peephole unseen so she could decide whether she wanted to open the door or not.
It was too late. Kika Garcia appeared in the window.
Damn it!
Her hand at her brow as if trying to see into the house more clearly, Kika called out, “I need to talk to you, Mrs. Olson. Please open up.”
Crouching at the other side of the door, so that social worker couldn’t see her, Ann tried to keep the fear out of her voice. “What do you want now?”
“I prefer to not have to shout it.”
Ann didn’t want her neighbors to hear this either. They had already caused her enough trouble. She switched on the hall light, unlocked the door, and faced her overwrought adversary. A half a head shorter than Ann, Kika Garcia had long dark hair and thick bangs over piercing green eyes. She wore a gold Madonna-and-Child medallion at her neck and spoke with a slight Mexican accent.
“I don’t understand why you keep coming here,” Ann said in a calm voice, though she felt anything but calm. “My attorney told you and your supervisor that all communication should be through his office.”
Kika’s mouth turned down. “I’m not going to let some lawyer stop me from doing my job. It’s my job to protect your child.”
“Don’t you read the papers?” Ann said. “Children are disappearing in San Diego. CPS should be worried about them, not Travis, who is loved and well cared for.” Just yesterday, a Mexican nanny had kidnapped her charge, a young girl.
Kika dismissed Ann’s words with an irritated wave. “That’s police business, not CPS’s. Please bring Travis to the door. I need to make sure he’s okay.”
Ann threw her hands up in frustration. “You just can’t go to people’s houses at night and expect to see their children. You’re being unreasonable.” That Travis should be subjected to such treatment made her want to slam the door in Kika’s face, but she was afraid that that might be used against her too.

Author Bio:
My love of stories started when I was very young. Listening to my father’s simplified version of Shakespeare at bedtime awakened my imagination. When I was six, I moved from suburban Boston to Italy with my family. Living in a two-bedroom apartment in the industrial city of Turin we didn’t own a television. I spent my free time reading The Hardy Boys, Nancy Drew, and many other juvenile fiction classics. My passion for literature really took hold during those years.

We returned to the States when I was eleven, to the same house on an acre of grass and trees that we had left. The main floor of our home was always neat and clean, with plastic covers on the common area furniture to keep the children and the dust off, while downstairs my father’s thousands of stacked books held dusty court. To this day, I love well-used books.

When I was younger, the thought of writing a book seemed so arduous to me. I wanted to work in business. At Boston College, I majored in English because I loved the subject. I figured I would learn about business by working in companies, not by studying them. After working in commercial real estate, investment banking, and in my own recruiting firm for many years, I decided that what I really wanted to do was write novels.

Have you read this book or another by this author? If you have, please scroll past the book sample and tell us about it in the comments!