You are here: Home / Archives for Unholy Testament-Full Circle 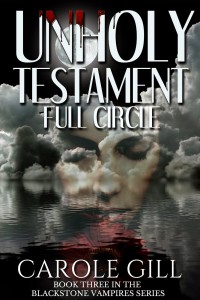 Rose Baines continues to be held captive by the demon Eco and must read the rest of his journal, which is a confession of all of his sins. The rest of the journal focuses on the characters that have haunted Rose’s living life and undead existence. But primarily, Eco’s journal tells of the sick and twisted obsession he has had for Blackstone House’s former mistress, evil and debauched Eve Darton.

This is Gothic horror at its darkest. Eco’s lustful relationship with Eve is told against the backdrop of aristocratic devil rites, both in England and France, including satanic sacrifices; continuing to the Great Fire of London 1666. Along the way there are plagues, vampire destroyers, witch hunts and, of course, vampires.
Human evil and supernatural evil are explored in detail. There are Resurrection men who supply a necrophile doctor. Every vice and evil is examined, including the hideous truth of Rose’s father and the reasons he murdered her family. Every evil that Rose Baines was subjected to is closely examined, as are those who committed the worst sins against her

What Inspired You to Write Your Book?
It follows on from Book 2, Unholy Testament – The Beginnings and continues the story.

Who are your favorite authors?
The Brontes, Daphne DuMaurier, Anne Rice and Susan Hill