You are here: Home / Bargain Books Under $3 / Taken by Laxmi Hariharan 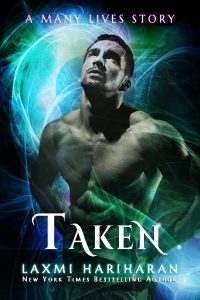 Love, lust, betrayal AND shifters
From New York Times Bestselling Author Laxmi Hariharan, comes book 2, in the bestselling paranormal action-romance Many Lives Series.
Three years ago Jai let the only woman he ever loved, walk out of his life, but Aria’s back now. Except she is in danger. And this time Jai will do anything, even break his vow to protect his city, to keep her safe. A second chance, paranormal action – romance featuring shifters

What Inspired You to Write Your Book?
I grew up in Bombay and now live in London, and it often strikes me how the East is now the West, while the West is now the East.

In Bombay, the conversation with my family revolves around flipping apartments, investing in the share market, chasing the higher paying job offer…to make money. In London, my days are peppered with friends who opt out of the rat race in search of themselves. Many give up the ‘day job’, change careers, move to distant lands, all in search of finding inner peace.

I sometimes feel that Londoners are on a quest for self-realization, while Bombayites are hungry to dominate the world stage. I also tend to think of ‘Bombay’ and ‘London’ as concepts; ideas which have exchanged places in this new world.

Then, a year ago, the European refugee crisis, which has been growing since 2011, reached a critical stage. A massive influx of migrants led to thousands arriving in the refugee camp now called the Jungle, not far from London. Londoners marched against the government, demanding a better solution for the situation. Not only did people donate to help the migrants, but volunteers from around the UK turned up to help in the Jungle. Some never left. Around the same time, the Prime Minister of India held a town hall with Mark Zuckerburg from Facebook headquarters in Silicon Valley.

The sense of the East and the West having exchanged places was strengthened in my head. I decided to flip the situation. What if successive economic recessions in the West, coupled with the tyranny of a totalitarian regime, drove Londoners to seek a new life in the East, with the most sought-after destination being Bombay? This was the starting point for Taken, my new story

How Did You Come up With Your Characters?
It’s 2039, and New Bombay, as the city is now called, is among the most prosperous places in the world. It’s also recovering from a tsunami that wiped away much of the city in 2014, restoring it back to its original seven islands. The metropolis has since been rebuilt and this time around, people want to do right by it.

In this New Bombay of the future, there is no pollution or overcrowding. Instead, there are virginal beaches, traffic rules and yes, even ID cards for its citizen. ID cards which keep out the unwanted, including migrants waiting for a chance to enter this ‘Shining Hope of the East.’

Yet, even in this new world, corruption and nepotism exist. As do hybrids. Half-wolf–half-human shifters — an unlikely fallout of the nuclear leaks from the tsunami which mutated the genes of some of its citizens. Hybrids who now prey on refugees camped on the outskirts of the city, waiting for their chance to get into this shining hope of the East.

It is against this setting that Jai Iyeroy and Ariana West’s love story is set.

About the Many Lives Universe
The Many Lives series begins in present day Bombay when a tsunami wipes away much of the city. Post-tsunami Bombay of the future is one of the most prosperous cities in the world. While successive economic downturns have stripped most Western cities of their wealth. Refugees from Europe now pour into Bombay, into the camp nicknamed the Jungle. And no one is safe from the growing menace of merciless human-wolf hybrids and vampires.

Each book in the Many Lives universe is a standalone; listed below
Many Lives Main Series
1. Feral
2. Taken
3. Untamed
4. Redemption
Many Lives Prequel Series
1. Awakened
2. Origins
3. Chosen

Book Sample
Jai stands not four feet away, fists clenched at his side as if controlling himself.

His eyes rake over my skin, leaving little pinpricks of fire in their wake. The heat spools off him. It crashes over me, curling around me, playing over the tops of my breasts, flowing down my waist, lower still. Tugging at the base of my groin, pulling at me. My mouth goes dry, and the pulse thunders at my throat.

Can’t move my eyes from his face either.

My fingers loosen and the towel slithers over my skin, sliding down my legs, falling around my feet.

Jai inhales sharply and the chords of his throat move as he swallows. Amber flames spark in his eyes. His jaw hardens as if he’s angry.

As if he’s made up his mind.

He takes a step towards me and another and a third, till he’s standing right in front of me.

Heat plumes off him again and I can smell him now. The bittersweet smell that makes my mouth water. Goosebumps erupt on my skin and I resist the temptation of winding my arms around my waist to cover myself.

He leans down, his head coming towards me and I lift my own. I close my eyes.

I want this. I want him. Want the sight of him to wipe away everything I’ve seen in the Jungle on the sea journey to get to Bombay, one which I’d been sure I wouldn’t survive. And before that. Before my father was killed, before we’d lost our home. I push that away too.

And I can feel him.

Can sense the life coursing through his veins. The desire coming off him in waves. He’s turned on. I know that. I can feel his arousal. And I want to surrender. I want to bury my nose in his chest and smell him, take him in, fill myself with him and…

He drapes the towel around me, over my arms, knotting it above my breasts. The tips of his fingers brush my skin and I shiver, not opening my eyes. I inhale sharply, my cheeks flushing.

His gaze burns a path over my skin, leaving flickers of fire in their wake. The heat from him is overpowering, swirling around me, a living connection. Dense. Heavy. So real I can reach out and touch it, sink into it.

And still he stays motionless.

He’s not going to kiss me or touch me again.

Heat drenches me and I want to die of mortification. I curse myself again, bite the inside of my cheeks, when…a soft touch as if he’s brushed his lips over mine. My eyes fly open but already he’s moving away, towards the bedroom door, shutting it softly behind him…

My knees tremble, almost giving way under me. Pulling my hands free I unwrap the towel and hobble to the bed. To where he’s laid out a fresh set of clothes. His clothes. Slipping into the too large shorts and T-shirt, I knot a belt around my waist, winding it around twice before cinching it in.

I hobble to the living room to find him standing by the window looking out.

The sound whispers over the rawness in my throat, every breath feeling as if it’s scraping against sandpaper.

He doesn’t turn, doesn’t acknowledge me. His back is ramrod straight and even without seeing his eyes I know the soldier in him is back. He’s put those barriers up between us and now I’ll never be able to get through to him again.

Why did you kiss me?

Why did you walk away from me just now?

When he still doesn’t say anything, a flash of anger ignites. Without realizing it, I move forward and am halfway across the room when he turns and asks, ‘Why what?’ His voice is casual, his eyes shuttered. He leans back against the wall, his hip thrust out slightly, indolent, as if he doesn’t care that I’m here with him in this room.

I know he does care.

Ignoring the burn from my wounded leg, I take the few steps forward to bridge the space between us till I’m right in front of him. Almost touching. Close enough to see the amber sparks swirl in his eyes. I know then that he’s not as unaffected as he’d like to pretend.

For joining the author’s email/newsletter list you will get:
Everyone gets FERAL, the first book in the series free