You are here: Home / Fiction / The Adventures Of Georgy B – Isi Ewu Got Me Arrested (Episode 1) by George Egbuonu 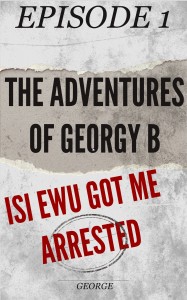 Targeted Age Group:: 14 yrs and above

The Adventures of Georgy B is the suspenseful and funny stories of a modern day African guy’s interesting experiences in the United States. It is written in a comedic style with each episode tackling a different story plot in the dramatic and comedic adventures of Georgy B.

In this episode, Georgy B gets arrested for the weirdest reason ever. You will have to read it to discover why and how he gets arrested and his dramatic experience in jail.

Be sure to leave your reviews and comments below.

“Suspenseful, humorous and truly an original kindle fiction comedy book. Written in a top fiction style that draws you in and captivates you like most of the good popular young and adult fiction books do.”
– Angela Basset

What Inspired You to Write Your Book?
I was inspired to write The Adventures Of Georgy B stories to tell a story that has never been told before. A story of an immigrant’s unique and comedic experience in the United States. I wanted to tell a story that is not centered on the typical immigrant’s stories of pain and suffering but instead one of fun and crazy adventure with so much twist and turns that it leaves the reader amazed, entertained and blown away with the story plots.

How Did You Come up With Your Characters?
My characters are conceived in my mind and are based on my intuitive sense of what the character should look and act like. It is totally organic and not scientific in nature. They are so real that you can identify with them and that is the key to me when developing my characters.

Book Sample
Georgy B used his memory to recall the way defendants always acted on every crime show he had watched. Georgy B demanded to use the phone. “It’s your funeral,” officer Friendly said without much friendliness.

As it turns out, defendants are actually allowed more than one phone call. Georgy B called his boys first: Emeka, Paulie and Peter. He didn’t realize how tenuous their immigration status was. Paulie and Peter couldn’t come to the station because they were undocumented. Emeka could put up the bail but explained he was on a student visa that he shouldn’t really have because he wasn’t enrolled anywhere. If someone else could go down to the station, he’d help him.

Georgy B didn’t even bother asking what “help” meant. Georgy B wanted to explain he’d pay him back but had no idea what astronomical sums would be involved in proving he wasn’t a cannibal.

Who the hell could he call, Georgy B wondered. Officer Friendly glowered at him from his desk. Georgy B stood in the hallway, trying to operate the phone they’d set up for defendants. Georgy B could only imagine the level of sad conversations that had transpired on this line.

“Who can I call,” Georgy B wondered again and again. He finally came up with an idea so preposterous, but he was desperate.

He dialed the number. He could hear loud bass pumping and people talking in the background. After only two rings, Shaqwan picked up. “Who’s this?” she said.

“Hey, are you meeting me at the club? What number is this?”

“Well, I don’t think I’m going to be able to meet you. That’s why I’m calling you. I’m in a situation here,” Georgy B said. He paused for a very long time, not knowing what the right words were to ask a crazy girl you’re sleeping with to please spring me from lockup because I’ve been arrested for cannibalism and multiple murders.

“Describe ‘situation.’” God she was merciless, Georgy B thought.

“Well, the cops made a mistake and I—“ Shaqwan wouldn’t let him finish the thought.

“Oh no. No. Sorry boo, I can’t. I cannot do this. I’ve dated so many motherfuckin’ convicts that my life was like an Alicia Keys song. I’m flexible on a lot of my dating criteria-“ Georgy B let that slide. It didn’t seem quite true. “But I can’t do the prison thing again for anyone. That was my New Years resolution last year and I have stuck to it so—“

Georgy B was fed up and ready to hang up the phone. Even in these insane circumstances, he reveled in the chance to finally cut her off. But she beat him to it and hung up on him. “What a crazy bitch,” he thought aloud.

He dialed Susan’s number. She answered after a few rings. “Hello?” she said like it was a question. Understandably, she didn’t like receiving phone calls from strange numbers late at night.

“Georgy B, hey, where you calling me from?” Georgy B cursed caller ID on phones in his mind. There should really be a way to at least initially sound calm and breezy while you’re calling from a holding cell.

“Yes, well, it’s a funny situation but I was pulled over tonight by the police and they think I did something I didn’t do.”

“That’s a little light on the details,” Susan said drily.

“Yes, I did not really want to bother you this late being that you are attending your animal rights convention stuff this weekend.”

“It’s Ok, what is going on?” Susan inquired.

“Yes, well, they think I’ve cannibalized people and they saw that I had an eyeball in my soup so, they assumed the worst—“

“You had an eyeball on you? Oh my God, who the hell are you?” The line went dead. Maybe if there had been something about bailing someone you’re dating out of jail on the online site dating questionnaire, Georgy B thought, he would have someone more helpful to call right now.

After a couple of rings, she picked up. She answered “hello” the same way Susan did: apprehensively, tentatively.

“Oh, hello,” she said. He quickly realized by the shift in her tone of voice that she thought this was a booty call. He’d called her up late at night once a couple of weeks ago but nothing came of it. In fact, he wound up agreeing to meet her for breakfast the following day, which at the time felt worse than nothing.

“I got pulled over by the cops tonight and they think I’m the Hillside Cannibal. I’m not a cannibal. I went to Mama Ngozi’s and she put a tongue and an eyeball or two in my Isi Ewu and the cops saw it and thought it was human flesh.”

Ify exhaled deeply on her end. “Damn it,” she said. For her, it was the most severe profanity she could ever muster. Ify had actually been to Mama Ngozi’s numerous times and had seen the eyeball and tongue before. It grossed her out, but it was Mama Ngozi’s way of being playful. Or just a lazy, bad cook. Ify thought it was probably a mixture of the two.

“So you’re at a holding cell downtown?” she asked. She’d been getting more information as Georgy B let the whole story unfurl nervously.

“Georgy B, I’m going to put you on the phone with someone who’s with me. His name is Kent and he’s a law student.”

“No, Ify, I just want to get out of here and if you can meet up with Emeka”

“Just hear him out and he’ll pass the phone back to me,” she said.

Ify passed the phone over to Kent. Kent sounded like a regatta captain. The name evoked life inside of a privileged bubble as a chiseled white boy. And why was she with him so late on a Friday night anyway? Georgy B looked at the clock on the wall and noticed it was well past midnight.

Author Bio:
George Egbuonu is the Amazon best selling author of the book series – The Adventures Of Georgy B. His books are currently been considered for a TV/movie series. He resides in Los Angeles, California and writes only unique and very creative stories.