You are here: Home / Horror / The Blackstone Vampires Omnibus by Carole Gill @carolelynngill 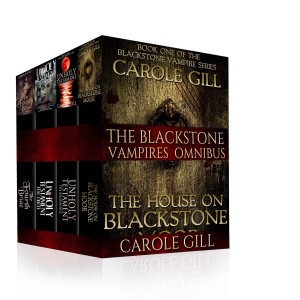 How Did You Come up With Your Characters?
They are there, already waiting for me to flesh them out when the story is only an idea. As I carry on they develop on their own!

Book Sample
The House on Blackstone Moor bk1
I remember feeling so many emotions—sadness, upset, grief, fear. And most of all, dread. Yes, dread and fear are different. Dread is beyond fear, I think. Dread knows fear was correct in the first place, and it just intends to sit and wait for the worst to happen, which will happen because dread, if nothing else, is sure of itself.

Unholy Testament – The Beginnings, bk2
I am the demon, Eco. I begin at the beginning, that is, my own beginning. There was hardly a time when the world did not know my name or the nature of my existence. I have been feared, hated and condemned to Hell. Yet, what is Hell to me but another place I call home?

Unholy Testament – Full Circle bk3
Then there is the being that calls neither Heaven nor Hell home, but exists somewhere in the middle—in whatever middle that might be. Do not look or call out for him, for he will come soon enough. Death is here for those passengers and crew the devils feed on. Death, who is always eager for more souls—Death, who always waits. And she is here, too—Lilith, first wife to Adam, the mother of all demons, mistress to both Satan and Eco. Lilith, who has come to think of me as friend. There! Now, can you see the nightmare world I exist in?

The Fourth Bride, bk4
The incident though, this rising up of vampire killers, disturbed Dracula and he became moody and silent. Eventually, he took me aside. He told me first of himself and of the princely blood he had which flowed through his veins. “These veins,” he said, pointing at them, “once ran with living blood—blood that nourished a human being and not this evil and corruption you see before you.” I scoffed at that, whereupon he smiled sadly. “No, dear one, it is true. I am not as I was, a warrior prince of the house of Dracula who did battle Turks to keep this land free…”

Author Bio:
I write all sorts of horror but gothic vampires are my specialty. I have just completed a new book in a new series.