You are here: Home / Horror / The Fourth Bride by Carole Gill @carolelynngill 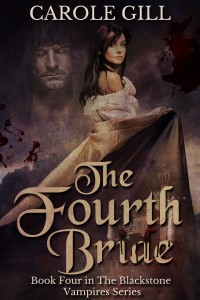 Book 4 in The Blackstone Vampires Series

After the tragic and sudden death of her groom, Dia, cursed by Dracula as a babe, is taken to his castle. Once there, she is seduced and turned by the count, and she becomes his fourth bride. The other brides are to be her sisters, and they are all to love and feed upon one another. As her master says: “The joy is in the blood…the passion is in the blood…endless life is in the blood…!”
And so she finds it is.

What Inspired You to Write Your Book?
Dracula appears in Book 3, Unholy Testament – Full Circle. He has cursed a toddler. She is cursed to become his fourth bride when she matures.
I knew I was going to write that as soon as I depicted Dracula.

But I was further inspired to write a novel, Bram Stoker, himself would approve of. Dracula is not changed or altered in any way, nor is his tale. As a matter of fact, details of his love of the occult and his attendance at the school in Scholomance is depicted. I wanted to show exactly what he and his wives got up to. I also wished to go into depth with regard to his living life as well as his undead existence.

And I wanted to tell the story of the three wives of Dracula and how they came to be with him.

Who are your favorite authors?
The Brontes, Daphne DuMaurier, Susan Hill and Anne Rice

How Did You Come up With Your Characters?
Well, Dracula appears in Book 3 as does the child, Dia.
As her mother is killed by vampires, she is given over to be raised in the care of Rose Baines, heroine of the Blackstone Novels.

As I wrote the story, I found new characters just appearing. There is also of course, Van Helsing and Dracula’s servants, the Szagany.

Book Sample
“Something cool yet comforting touched my lips. I opened my eyes to see a graceful hand lingering there. A woman was smiling at me. She leaned over and kissed me on the lips. And although her lips were icy, it was pleasing.

She didn’t reply, she only took my hand in her cold one and kissed it. “ Dia…”
“How do you know my name?”

“The master told us.”

I was suddenly aware of other voices. Voices that answered in perfect unison. “The master,” they repeated until it sounded like a chant.

Then, in the soft glow of candlelight, I saw three women. They were strangely beautiful, garbed in long flowing white gowns. Suddenly they began to float up toward the bed ever so slowly, their fingers reaching out toward me as they called, “Sister.”