You are here: Home / Horror / The House on Blackstone Moor by Carole Gill @carolelynngill 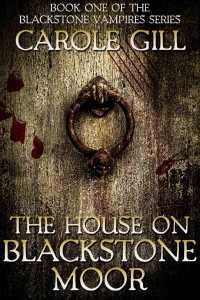 Young Rose Baines discovers the savage murders of her family by her mad, incestuous father. She is plunged into a nightmare of hell and is incarcerated in two madhouses after which she is helped to obtain a position as governess at Blackstone House.

The house is located on haunted moorland. Nothing is as it seems for Blackstone House and its inhabitants have hideous secrets. There is unimaginable horror there but there is love too–love that comes at a terrible price. The story is as haunting as it is terrifying and will remain with the reader long after its disturbing tale has been told.

What Inspired You to Write Your Book?
I grew up loving Gothic romance. The books, as terrific as they were however, always implied more darkness than there was. Those were the ones in the 1970’s, the ones with the covers to die for: heroine scared out of her head, a menacing castle with a handsome, brooding man in the back ground…all the elements that made me want to devour them!

But when I got to the end, I often felt cheated. I didn’t feel the stories were dark enough. I wanted much more. No stranger to the moors near Haworth that inspired the Brontes inspired me! I imagined a grand looking house built on desolate, haunted moorland. The characters, human and not began to make themselves known. They told me their story.

Who are your favorite authors?
The Brontes, Daphne DuMaurier, Anne Rice and Susan Hill,

How Did You Come up With Your Characters?
I thought of a basic plot. I don’t write with a detailed outline. Once I determined what the beginning was to be, the characters just came to me.

Book Sample
“I began to grow excited, too. Suddenly we stopped as Simon pointed at a large flat rock. “There, that’s it!”

It looked like a ledge that had been deliberately laid down. I went to touch it but Ada warned me. “Touch it only if you dare!”

“I dare!” I cried. The surface was far smoother than I would have imagined.
“See how black it is, Miss?”

“Quite black,” I agreed.

Simon nodded. “It’s as black as the eternal night! And do you know why it’s black, Miss Baines? It’s black with blood!”

“Yes, truly! It has blackened with blood and gore and innards and guts and things that soaked into the stone!”

“What a thing to say! Where did you hear such things?”