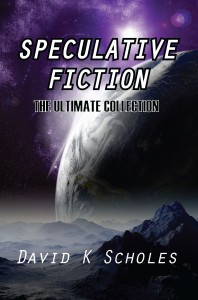 A collection of some 23 speculative fiction short stories including science fiction, alternate history, science fantasy and an alternate reality story.

In The Intervention a super power empire’s long search for the truth about an ancient war yields an unexpected result. The horrifying trip encountered in Dangerous Journey is not quite what it seems while in Easy Meat a powerful star fleet finds an apparent mining colony more troublesome than expected.

Rescue Mission involves the attempted rescue of a group of humans that are being deliberately transported among ever weirder alternate realities while in Hired Guns star troopers for hire rid Earth of all it’s terrorists but there is a price to pay.

In the A Greater Britain series the United Kingdom is the third super power in a very dangerous post WW II environment while in Trathh an alien prison ship crash lands on Earth.

What Inspired You to Write Your Book?
A life long interest in speculative fiction comics, books, and movies and a desire to give something back to the genre. My alternate history stories such as the “Greater Britain” series were motivated at least in part by my disappointment that post WW2 – Britain was no longer a great power. In my stories they survive WW2 and the years beyond as the third superpower. In one of my stories I re-write the 1956 Suez Crisis with more favourable results for Britain but rather less favourable results for the US and the USSR.

How Did You Come up With Your Characters?
In all sorts of ways. Some may be very loosely based on people I have known. Others even more loosely based on some character already in existence but my character ends up being vastly different. Sometimes I might be looking at a set of skills and powers and create a character that has these and then add to the character.

Neandarr the wise, high teacher and last surviving Elder of the Multiverse looked out among the few remaining stars. With him were his young charges, a cherished group of youth comprising all of the “last born.”

“Please tell us Elder,” pleaded one of them “of the first time war.”
“And of the first and second Multiverse wars,” whispered another student,
“And of the second and last time war,” implored yet another young voice among the small group.

The faces of the Elder’s charges lit up just as their voices fell silent at the mere mention of these three awesomely powerful, fundamental forces for good. Their young minds immediately conjured up images of the ancient gods of greater Asgard. Of All Father Odin, All Father Thor, All Mother Sif and the High Lord Magni. Have not young children’s voices throughout history fallen silent at the mention of these great names, these great and noble forces for good?

Where can I start? thought the venerable one, knowing that the ancient stories had inevitably been distorted over time. Of the few who yet lived only he, and just one other, were capable of unraveling what was fact from fiction. Actual events from the myths and legends that had arisen from them. The truth from half truths and indeed the outright lies promulgated by some. Yet these few before him, the true last born, had the right to know. The right to know what was surely the greatest story of them all.

“The first of the great inter-temporal wars was a direct challenge by the dark fates and their equally dark followers to the authority of Times Guardian himself,” began the Elder, his mind drifting back into that inconceivably distant past.

Neandarr recalled how after the now moment wave was destroyed, Times Guardian had asked the gods of Asgard for help and it had been forthcoming. The Elder remembered it as if it were only yesterday, the sight of great Odin holding the spear gungir high and the mighty Thor holding with both hands the hammer mjolnir and side by side how they called forth the greatest of all the time storms. How the two titans became as one with the great storm and how they took the weight of battle from Time’s Guardian’s shoulders affording him a moment of respite, before he re-joined the Asgardians in thwarting the assault on time.

At the mere mention of the hammer of Thor, the greatest weapon ever known to have existed anywhere and anywhen, the children huddled even closer together. Not in fear, or because of the cold, but in absolute awe.

Pride swelled within the Elder’s breast as he related the histories and the crucial role played by Asgard. In almost all of the truly major confrontations Asgard had been the nexus point. No matter what happened elsewhere it was here on the Asgardian axis that any truly Multiversal confrontation was won or lost. Unlike his fellow Elders, Neandarr, youngest of his ilk, had called Odin, Thor, Magni, and others of the gods of Asgard friend and, in one case, still did.

Neandarr told his charges of the first of the Multiverse wars. An immensely destructive and yet inconclusive conflict that saw among other things the complete annihilation of the Celestial race.

He remembered Odin and Thor and just a few other surviving gods returning to Asgard after the war and sitting for days among the debris at the great table in the hall of Odin. All of them exhausted, nursing their wounds, re-gathering their strength, and mourning lost comrades. Too weary to talk about the war or even to consider the rebuilding of Asgard.

Yet as they sat there Odin could see the anger, the righteous wrath slowly building again in his son. An increasing rage, like the building of a head of steam in a boiler, a rage that would have to have an outlet. Or else become warrior’s madness.

At this time Thor the mighty chose to travel forth alone among the stars, returning some days later. He said nothing and no one asked anything of him but Odin saw that the anger had died in his son. At that time many detected the annihilation of a fundamental force of the Universe. That which some had referred to as the anti-god force and which had sided with the cosmic powers was no more. Thor never admitted to it, but Odin knew and later Neandarr knew. The cosmic powers, war weary beyond all measurement, did not respond, at least not at this time, perhaps they did not care.

The so called second Multiverse war was really a continuation of the first after the hiatus in which the gods and the cosmic powers re-gathered their strength. Yet the surviving cosmic and abstract powers had been more cunning. Waiting until a bone weary Odin entered the inevitable Odin sleep before re-commencing hostilities.

By staying in Asgard itself the mighty Thor had been able to protect his sleeping father during that second conflict. Yet with its inconclusive end no one, not even Thor himself, had been able to awaken Odin.

The constant risk of attack on Odin while he underwent the great sleep caused Thor to draw on magics most ancient and ensconce the life force of Odin and the essence of the Odinforce and indeed all that was his sleeping father within the artifact known as the ring of Odin. Actually a separate pocket reality. The Thunderer wore the Odin Ring on his finger at all times, to hold his father close and in order to best protect him.

Yet in the second and final time war as the mighty Thor destroyed the dark fates themselves the ring of Odin came from his finger and was irretrievably lost. Buried deep in the well of time and amongst a labyrinth of dimensions and alternate realities. A final act of vengeance by the defeated dark fates. Though ultimately the second time war is known more for something else. Weary beyond all imagining Time’s Guardian passed on the burden of his responsibilities to the only entity in all of existence that was both worthy and capable. The mighty Thor, now All Father Thor, took up the mantle and became the new Time’s Guardian. Yet it was one of those unexplainable mysteries of the Multiverse that even the new Time’s Guardian could still not locate the Odin ring.

Neandarr remembered the third and final Multiverse war. As Times Guardian the mighty Thor did not, could not, intervene directly in the conflagration. Though Thor moved to contain the conflict, and to not allow it to destroy the time stream. The war led to victory for the gods and the final defeat of the cosmic powers. Yet at a terrible cost. High Lord Magni and all Asgard paid the ultimate price for the success of the gods.

The mighty Thor would continue as Time’s Guardian destined to fulfill that loneliest of all roles until Time’s End, yet an intolerable sadness was upon him. Sadness he might always have to bear.

As the historical account came to a close, the smallest of the children sitting before the Elder looked up at his teacher. The boy, the last born among the last born themselves, was the first to notice. Why had he never noticed the ring on Neandarr’s finger before? It was large and ornate and seemed to be growing brighter with each passing second.

In a glorious moment with few parallels in Multiversal history an entirely unexplainable thing happened. A force which had not seen the light of day in untold eons began to emerge from within the ring.

Neandarr watched on with just as much wonder as his small charges as his old friend re-awakened.

Long ago when even the mighty Thor had stopped searching for his father, Neandarr, high teacher, Elder of the Multiverse, had quietly, patiently and painstakingly, continued the search for his old friend. The longest search in all of the history of the Multiverse. That Neandarr now bore the ring of Odin on his finger, was testament to the eventual success of that search.

Who knows what the reasons were for Almighty Odin awakening now from the sleep eternal? Perhaps it was some divine, unstoppable mechanism of life reasserting itself here so close to Time’s End.

Can you even begin to imagine the power of Odin, one of the truly great powers of the Multiverse, after he has slept for untold ages?

There to meet Odin as the All Father breathed life anew back into a dying Multiverse was another All Father. Son and Father, Times Guardian and Times Savior.

Thor and Odin together again. Who was there to gainsay them?

Neandarr looked out at the ever increasing stars in the heavens and the silence gave him his answer.

Nearby a young boy, knowing intuitively that he would no longer be the last of the last born, cried with tears of joy.

I have been a regular contributor to both the Antipodean SF and the Beam Me Up Pod cast sites and have also been published on a variety of other sci-fi sites such as Bewildering Stories, 365 Tomorrows, and Farther Stars Than These.

Link To Buy Speculative Fiction The Ultimate Question On Amazon