You are here: Home / Fiction / Visions of Johanna by Peter Sarno 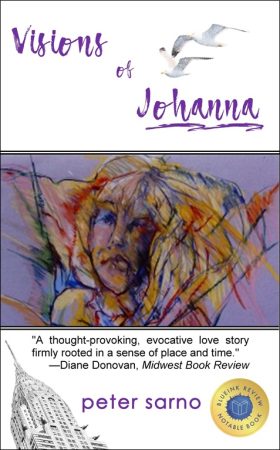 “A beautifully written literary novel . . . Sarno’s use of metaphors and lush language draws readers into the story . . . [who] may shed a tear or two before the final page is turned.”
—BlueInk, Starred Review

Johanna, an artist, and Matt, a music critic, couldn’t be more different, but by a simple twist of fate, she plucks him from a crowd at a Dylan concert. What follows is a heady and intense relationship buffeted by the usual suspects that gently rocked the ‘80s. Matt’s lessons in art—as well as life—at the hands of Johanna, drive the novel into pockets of feminism and quiet revolution. All of this is tempered by deeply held traumatic secrets that torque their intimacy.

Yet it’s Revere—and not Boston—that remains one of the underlying attractions in “Visions of Johanna”. This north shore backdrop brings Matt into full focus—a child in a city of recent immigrants, life by the ocean, the bilious flavor of the Mob are just some of the elements rendered in skillful detail. Johanna, a renegade from Wisconsin—freewheeling and hyper-energized—draws Matt out of his comfort zone and into her world.

A meditation on art and unrest, “Visions of Johanna” celebrates life, love, memory and the undying power of the deep connections that sustain us. The novel follows Johanna and Matt as they pursue their dreams to paint and to write. But burdening problems collide with these artistic desires and other forces conspire against them. Ultimately, the two are done in by their inability to share aspects of their past they believe they must hide from.

The novel travels through time and social unrest to the final moment hinted at in the prologue. Within this book’s pages, tragedies haunt, acts of moral goodness manifest themselves, and benevolence reigns with a finality that absolves all.

“This would be a perfect book club book. With questions that address the concepts of faith and hope to the efforts put towards the women’s movement, there is a lot that can be talked about…Detailed, wonderfully written, and thought-provoking, ‘Visions of Johanna’ will have readers thinking long after they put the book down.”
— Kristi Elizabeth, Manhattan Book Review

What Inspired You to Write Your Book?
I read a novel about a younger man and an older female artist and it hadn't rung true. Though written by a well-established author, it seemed to me to be about a "pretend" artist. Of course, I could be dead wrong. Other folks were engaged and enjoyed it. But—with a certain level of arrogance—I thought, I knew a talented and brave artist and might be able to share the experience of what that artistic life was like more effectively.

Then I thought, "Why hadn't that relationship worked out?"

How Did You Come up With Your Characters?
Independent of the above inspirations and character, over the years, I had tried several times to write a story about a dear friend who tragically lost her life while only sixteen-years-old. And I eventually finished two short stories based on her. She had been hit by a drunk driver, abandoned on the side of the road, and found dead by her older sister who went out looking for her after she hadn't returned home from a trip to the neighborhood convenience store. I was numb for weeks and much longer. Years later, only two main images of my friend remained: one of her dressed in a stylish suede leather fringe jacket of the era with her sparkling brown eyes and luminous smile on the Friday she left for that weekend trip to Maine—the one I saw. And the other: her lying by the side of the road, alone, waiting for her sister to find her—the one I only imagined, yet could never rid myself of.

I didn't know how to deal with that pain. There were really no such things as a grief counselors in "those days" and a man (even though I was only sixteen myself)—especially in my neighborhood—was expected to suck it up. It wasn't until I started writing the novel that I understood that these events might be related. That perhaps one of the reasons my relationship with the artist didn't work out had something to do with this traumatic event.

Finally I wondered, "Why is music so damn important to you?"

Author Bio:
Peter Sarno taught literature and memoir courses at the University of Massachusetts, Boston and has published essays, reviews, and short stories. While a graduate student at UMass, he won the Donald E Cookson prize in nonfiction. His work has appeared in The Boston Globe, Music World magazine, Sweet Potato, Gannet newspapers, Gatehouse Media, and other outlets.