You are here: Home / Bargain Books Under $3 / Webs in the Mist: The Jessie Morgan Series, Book 2 by Maggie Plummer 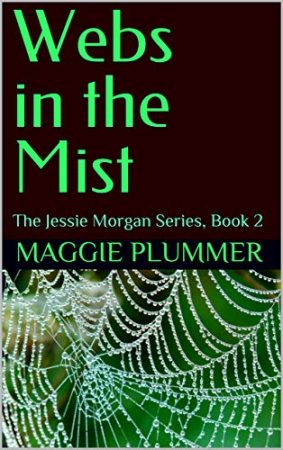 It’s 1972, and San Francisco is a global mecca for hippies and radicals. In Book Two of The Jessie Morgan Series, 21-year-old Jess can’t wait to join her friend Donna there. Driving her VW down the Pacific Coast, she’s more than ready for the city’s open Bohemian vibe, bongo-mad street life, perpetual protests, and cutting-edge counterculture.
Among the characters she meets are Cat, a tall, fun-loving Sicilian, and Carl, a Harley-riding enigma with bushy red hair. As Jessie gleefully spreads her wings in the City by the Bay, she leaves her stormy past behind.
Or does she?
This novel is recommended for mature readers due to 1970s-era sex, drugs, and profanity.

What Inspired You to Write Your Book?
My Jessie Morgan Series is semi-autobiographical. I was and am inspired to write it because I have so many wacky stories from the 1970s. It feels great to get them written down and woven into these novels. The series begins with BELL-BOTTOM GYPSY and continues with WEBS IN THE MIST, which has just been released. I think it's fun to look back at the '70s from where we stand now. I'm glad I was there, and I'm glad I did all the things I did during that unique time. Hey, I lived to tell the tales!

How Did You Come up With Your Characters?
My characters are based on real people, with names changed to protect the (guilty?) … um… innocent? My intrepid protagonist, Jessie Morgan, is basically me back then. I think in some scenes, she is how I wish I'd been! Most of the other characters are composites of various real people. For instance, Donna is my real housemate from San Francisco days combined with a fictitious friend Jessie met in Key West. Twisty is based on a real boyfriend I had in Key West, but his dark, troubled side is pure fiction.

CHAPTER 2
Twisty
He sat on his bunk, slouched over his letters. Each envelope was stamped “Return to Sender” in crimson ink. Shit! They were meant for Jess. Twisty got up and paced around the cell, crushing the envelopes in his hand. Why hadn’t she written? Where the fuck was she?
“Huh?” Jimmy, his cellmate, stirred in his bunk.
“Nothing, go back to sleep.”
“’K.” Jimmy went back to his nap.
Twisty hadn’t seen Jess since the wreck. She’d looked dazed, sitting on the grass with a cop and staring at his Cadillac, which had been perched precariously in the barrow pit and about to roll. From the back of the cop car, Twisty had watched the ambulance pull up. An ambulance. For Jess.
She’d never come to see him. There had been one note from her, but it hadn’t said much. It would take time, but Twisty knew he’d get her back. He had to. Jess was his woman. No way would he let her go.
What the hell could he do about it from this shithole?
First, he could get his poop in a group. He was working on it. Hell, he’d been clean for two months. At first it had been a bitch on wheels. The doctor was still talking about sending him to treatment.
He recalled how Jess had looked when they met in Kentucky a little over a year ago. Tall and lean, she was a natural beauty who didn’t need makeup. Her raven-black hair and cat eyes had made him think she was Native American. No, she’d told him, she was dark Irish. His own coloring came from his Cherokee blood. Both tall and dark, they made a great-looking couple, Twisty thought. He’d never forget the first time Jess wrapped her arms around his neck and kissed him. He’d felt like a real man.
Twisty caught his angular image in the funky cell mirror. Man, he’d lost weight. He’d always been sharp-featured, but now he was gaunt. The food here was gross. But it was time to force himself to eat more, and start working out. That way he’d look good for Jess.
Twisty leaned against the bars, the cold metal soothing his feverishly hot face. Maybe he could pay someone to track her down. There was money in his Asheville bank account. Ma was coming to visit in a few days. They could talk about hiring someone.
The buzzer echoed off the naked concrete walls. Rec time. Good. Some air, and walking the yard track with Carl. That crazy redheaded fucker was full of good bullshit.
Maybe Carl could help get his mind off this crap.

Links to Purchase eBooks
Link To Buy Webs in the Mist: The Jessie Morgan Series, Book 2 On Amazon

Author Bio:
Maggie Plummer is a multi-genre author based in northwest Montana. Her latest novel, Webs in the Mist, is Book Two of her semi-autobiographical Jessie Morgan Series. Maggie, like Jessie, lived in San Francisco during the free-wheeling 1970s, riding cable cars in patched bell-bottom jeans, wearing cedar oil as perfume, walking barefoot up and down the city’s steep hills, and drinking espresso in North Beach.
These days the author works from her home near the shores of Flathead Lake, where she loves camping in the summer with her sweet black lab, Peaches. During the long winter, Maggie enjoys making soups, stews, and fresh salsa – when she’s not hibernating. Webs in the Mist is her fourth published novel.