You are here: Home / Fiction / A Father’s Daughter by Katt Rose 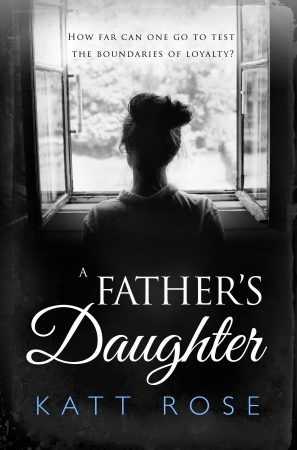 How far can one go to test the boundaries of loyalty?

Abigail has spent her whole life trying to forget her father Jack, who left her years ago and never looked back.

After Jack’s wife disappeared, Abigail knew she couldn’t leave her 7-month-old half sister alone with her father.

Abigail uncovered clues of her past and she knew something was terribly wrong…. she sees Cara is in danger.

Abigail is left with a very important decision.

And then it came. The knock on the door, the flashing lights in the driveway.

There was only one thing at this point she was certain of.

Her world was about to change……Forever.

What Inspired You to Write Your Book?
I'm inspired by the world around me and my experiences, which seem to come my way in a negative way which for me by using even the smallest of events, I can build a story on it. This is derived from my childhood, with my father leaving me at a very young age, and I built on that emotion.

How Did You Come up With Your Characters?
I never know how the characters will come out until I start typing. They get created as I go. Sometimes I use personality traits by the people around me and build on that. Mostly once the story unfolds, my true character is revealed.

Book Sample
Preface
The Beginning
It all began when I was four years old. I remember everything; from hugging
my knees and gently rocking back and forth to hiding in the closet, which
became my “safe place.” My parents were fighting again; I heard them
screaming at each other from downstairs. My mom began to cry. I only heard
bits and pieces, but it all revolved around a woman named Alison. My Dad
sounded mad. I didn’t understand what was going on, we used to be such a
happy family but things had begun to change.
My mom and I had to move to a new house, a smaller house. It only had
one bedroom and a bathroom with faulty plumbing. It was a drastic change
from our last house; which held large spacious bedrooms and two modern
bathrooms. My mom said we had to downgrade because it was all she could
afford on her own; I didn’t know what that meant, but I knew it wasn’t good.
Our food took a hit as well. Instead of quality meats and fresh produce our
menu now mainly consisted of cereal, crackers and meals that came from
frozen boxes.
My mom spent a lot of time crying and so did I. Often times I could hear
her sob from my bedroom; it would keep me up at night and make me sad. I
would crawl into her bed, where she would hug me tightly and promise me
that everything would be alright. I was starting to get a strange and horrible
feeling in the pit of my stomach; my dad didn’t spend the night here anymore,
he couldn’t check for the monsters under my bed, or read me my bedtime
stories. But a part of me was glad. When my dad left, the screaming stopped.
The yelling scared me, and it made my mom cry. I did not like it at all, and
once, I even got mad at my dad and told him to leave because all he ever did
was make mom cry.
Today, my dad had taken me out for ice cream. It did not feel the same.
It seemed as though he were mad at me, he barely spoke, barely looked at me.
It had scared me and I started to cry for my mom. My dad brought me home
quickly after that and he promised he would see me again tomorrow; we were
going to spend the day at the beach. After my dad brought me home, I ran
for my bedroom and forgot to give him a hug and kiss on the cheek. Once I
was in my room, the screaming started downstairs. I jumped and hugged my
teddy closer as the front door slammed shut. I heard my dads truck start, and
then he was gone.
Footsteps sounded outside my closet, and my mom quietly peeked her
head inside. “Hey, kiddo what are you doing in there?” My mom’s voice was
slow and sad, so I motioned for her to sit beside me.
She did. I gave her one of my favorite teddy bears. “Here mommy, Bear
will make you feel better.”
My mom nodded, and then she started to cry. I watched her wide eyed
and crawled into her lap. She hugged me tightly, and we rocked back and
forth until her tears stopped falling. I never saw my dad after that.

Author Bio:
Katt Rose is an aspiring young writer who has a love of music, animals (horse lover) and writing. Katt is a true country girl at heart and would always rather be outside in her garden, on the beach or somewhere in the woods on her horse with her faithful dog by her side.
Katt studied Creative Writing and Journalism in University but decided to step into the health care field, after nursing her Oma back to health.
Years passed, but Katt could not silence the stories in her head. Once she began to write, she knew there would be no turning back. She was home. She is most proud of winning best fiction Apple Award of Excellence.
Katt Rose aims to be a well-known best-selling author, from the perfect stranger to someone you know. Remember, no dream is out of reach