You are here: Home / Bargain Books Under $3 / Final Chance by E.B. Roshan 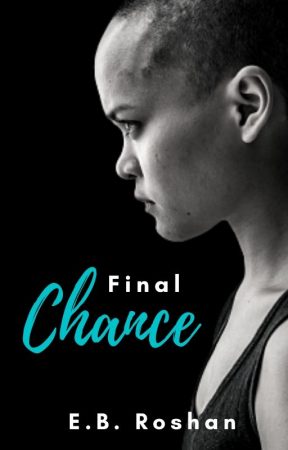 How Did You Come up With Your Characters?
I came up with the idea for the heroine of this particular story fairly easily. While she isn't based on any person I know in real life, once I started writing about her, it was easy to develop her character. Preen is stubborn, a bit reckless, determined to "fix things" for herself and her family, and before she knows it she's in way over her head.

Preen blew away the strand of hair that had fallen across her lips. As she guided the buzzing clippers across her head, more strands caught on her eyelashes, tickled behind her ears, and drifted to the dusty ground. Tears began to trickle down her cheeks as she squeezed her eyes shut.
"Hair, Mommy!" squealed her daughter, Sitabi, scooping up a handful and tossing it up into the low-hanging branches of the juniper tree they sat under.
The April breeze brought a whiff of manure as it blew across Preen's bare scalp, making her shiver. She leaned back against the tree trunk and closed her eyes.
A cow lowed from inside the big barn that her family and relatives shared. The dark sound was both sad and soothing. Another answered from the hill pasture. The cow in the barn began bumping around in her stall. Since she'd just given birth to twins, Arjun wanted her nearby where he could keep an eye on her.
"No hair!" Sitabi giggled again, her almond eyes sparkling. She grabbed a handful of her own silky hair and tugged.
Preen brushed black wisps from her chest and shoulders. "Yes, love. Mommy cut her hair. Do I look funny?"
Sitabi wobbled to her feet, stretching to her full two-year-old height. "Funny."
The sound of footsteps on the other side of the clump of junipers made Preen turn around. She leaned sideways to peer through the tangle of branches.
Her cousin, Kiva, was coming up the path, leading one of his cows by a rope looped through the ring in her nose. Her heavy udder almost brushed the ground as it swung in time to her steps. Behind her came a tiny calf, still shiny new. He must be taking them down to the barn.
Kiva was tall and handsome; light brown hair and green eyes. His father owned the barn as well as most of the family pasturelands that lay in the shadow of the snow-streaked Tur Kej mountains.
Preen and Kiva would be getting married at Christmas. Kiva had wanted it to be sooner, but Preen asked him to wait until Christmas. He'd agreed without asking why, because he knew why. Everybody did. Preen pressed her hands to her eyes as memories flooded her mind.
"Mommy!" Sitabi's shrill voice brought Preen back to the present. "My turn!" Sitabi shook the clippers.
"No! Give them to me." She snatched them from Sitabi before the little girl could cut a stripe through her own hair. Stooping, she picked her up and swung her onto her hip. "Let's go."
Kiva caught up with her on the path halfway to the house. "You shaved your head," he said softly. "You didn't have to do that."
Preen tensed. "Yes, I did. I was really married. Now I'm really a widow."
"Then you should have got your mother to help you."
She shrugged. Prickly bits of hair had sprinkled down inside her dress and stuck to her skin. "Why would I need help?"
"You've…missed some spots," Kiva said. "Can I tidy it up for you? Please?"
Preen handed him the clippers and bowed her head. The feel of his fingertips on her scalp sent a shiver down her spine. She couldn't decide if it was a good feeling or not.
He guided the clippers past her left ear, then twice down the nape of her neck. "That's better." He switched them off, blew the hair off the blade, and wiped it on his jeans.
They started back toward the house together.
"I didn't think you were ready to tell Rama goodbye," Kiva said after a little silence.
She glanced at him. The hope in his eyes was painful. "He's dead. What else can I do?"
"But he's been dead for months. I wasn't sure if you would ever…" he stopped.
Ever be brave enough to accept it, she silently finished for him.
Sitabi kicked her dusty bare feet. The bells on her ankle bracelets jingled as she bounced. Her little tailbone was digging into Preen's hip. For a two year old, she was heavy.
"Are you going home for lunch?" Preen asked, burying her nose in the soft place between Sitabi's neck and shoulder so she wouldn't have to look at Kiva.
"Actually, my family's at your house," Kiva said. "Our TV hasn't been working, so we came to watch the news on yours. Haven't you heard what's happening in Dor?"
Preen rubbed her free hand across her shaved head. It was as soft as her best black velvet dress. "No. I've been out all morning. And I don't want…" I don't want everyone to see me like this. Not yet. But "this" is what I am now. A widow. No more "What if…?" No more "Maybe he escaped somehow…"
Kiva put a hand on her elbow and guided her in through the low door of her family's red-painted wooden farmhouse.

Author Bio:
E.B. Roshan has enjoyed a nomadic lifestyle for several years, spending time in the Middle East and Asia. Now she is temporarily settled in Missouri with her husband and two sons, where she serves the local refugee community. When she's not cooking, cleaning, or chasing the boys, she's working on Shards of Sevia, an ongoing Christian romantic suspense series.