You are here: Home / Bargain Books Under $3 / Memoir: The Cathartic Night (Temporality to Inevitability) by Aman Tiwari 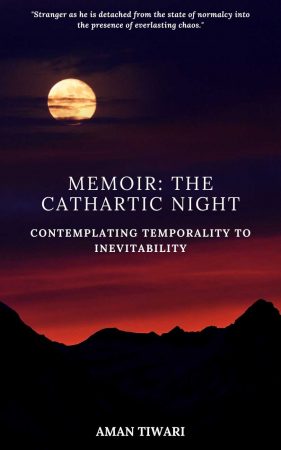 How Did You Come up With Your Characters?
I developed the characters through an intriguing way of relatability. The development of the story was more of an extempore nature and so was the portrayal of characters. Every major character of the storyline possesses a particular set of characteristics which are mirror projections of the people around us. The protagonist of the Novella, Murk Zilch, has an interesting psychological personality. It is a naked projection of the 'self-contradictory' anima that everyone possesses on some level. The story aims to reveal the basic human nature and instincts which everyone realises but are afraid to admit and hence allow them to be suppressed under the garb of persona. In its entirety, the characters are a mixture of my imagination and some relatable aspects of people around me. It is basically a portrayal of my contemplation and observation extended by the imagination aligned to that which exists.

Links to Purchase eBooks
Link To Buy Memoir: The Cathartic Night (Temporality to Inevitability) On Amazon