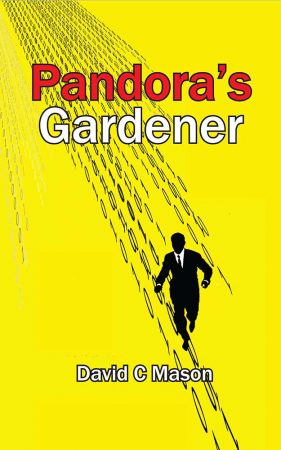 What do a gardener, missing accountants, and a Detective Inspector on the verge of retirement have to do with a grand plan by an evil mastermind for world domination?

Who are the mysterious Society?

All is revealed in a humorous adventure spanning from London to the seaside as the disparate threads are drawn together for a grand finale.

“…a fun and fast paced thriller that tows the line between the serious espionage of James Bond and the absurd escapades of Austin Powers.” Literarytitan.com

“An exciting thriller, crafted with great finesse, and an entertaining story.” readersfavorite.com

What Inspired You to Write Your Book?
The Saturday matinee serials of childhood, where the end of each episode finishes on an unresolved question or cliffhanger, my favourite Hitchcock films, The 39 Steps and North by North West. Pure escapism, adventure and thrills which I wanted to capture in prose. Also I wanted to include humor, I think this can work well with drama – it provides some light relief. I didn't want to write something too dark.
Also my Mum was a great fan of Alastair Maclean and my Dad loved a good laugh, so I thought I'd write something that they could have both read and enjoyed.

How Did You Come up With Your Characters?
Some of the characters are the classic tropes, the jaded detective on the verge of retirement, secret agents, covert agencies and the antagonist intent on world domination. All standard "ingredients" but like all recipes its how they're combined. Into I threw the main protagonist, John Cranston, a gardener. Its about as far as I could get from ex cop/commando etc, so when introduced (unwillingly) into a parallel shady world, that's when the adventures start.

Book Sample
They raced down the stairs and on the lower floor the Ninja peeked around the exit and raised his clenched fist above his shoulder, indicating they should halt. John noticed he didn’t say much, which he put down to the pillowcase being wrapped too tightly around his head. The Ninja continued to sign, not wanting to make a sound in case he revealed their position. He pointed to his eyes and then outside. He executed a small mime with his fingers walking around, followed by a circle scribed in the air with his index finger.

The Ninja silently slapped his head with the heel of his palm, looked heavenward, counted to five, and then suddenly burst through the door.

Author Bio:
Bexhill-on-Sea writer David C Mason is the author of the new novel Pandora's Gardener, an adventure thriller with added humour.
Originally from London's East End he "escaped" to the seaside to see out his last years of climbing the corporate greased pole, before giving up to do something more interesting.
After thirty odd years of writing plans, outlines, proposals, strategies, business cases, most of which could have passed as works of fiction (or "scenarios" as they were known), he is no stranger to making things up.
He thought it would be a shame to let all that experience go to waste.
When he's not writing, thinking about writing, or out with his camera, he can sometimes be found telling people that "no, Bexhill-on-Sea is nothing to do with Southend-on-Sea…"