You are here: Home / Fantasy / Red’s Soul by Sherif Guirguis 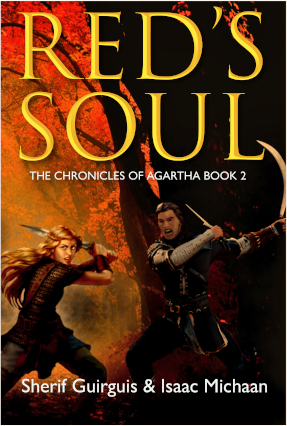 Darren made a deal. A deal for a new soul.

In Agartha, you belong to people with the same your soul’s aura color, and Darren doesn’t belong, he can’t be a red.
But is he ready to pay the nefarious spirit he made the deal with, the price of a soul?

Darren has to travel through Agartha, seeking a way to end the deal he made. And even though he has the support of his friend Mara, fighting minotaurs, trolls and harpies pauses a horrible threat to their journey.
Would they survive enough for Darren to get free, or will they face a pre-mandated fate worse than death?

While Darren and Mara face the terrible challenges of Agartha, Ethan, the Green Boy, traveled to the surface world searching for a cure to his fatal condition.
Only one person can help him, Merlin the eternal wizard, a man believed to be a myth.

Darren, Mara, and Ethan are all hurtling through the world under the illusion of free will, but an ancient prophecy that foretold the destruction of two worlds might have them in its grasp, leading them to their doom.

The fates are watching, calculating, and judging…
No one has ever escaped their judgment — but could this change?

The follow up to the award-winning “The Green Boy”

What Inspired You to Write Your Book?
My co-author Isaac Michaan contacted me with his idea about a world under our own. The discussion went on for a month, b but by the end of it, we had a developed world for a fantasy series, and this is what gave birth to The Green boy, the first book. Then we waited almost a year before we started to work on Red's Soul, which we wanted to be bigger, better, and a lot more action-oriented.

How Did You Come up With Your Characters?
Ethan was our first character, we wanted a flawed hero, someone you can relate to. He suffers from severe anxiety, he is awkward around girls, and he doesn't know why he exists.
Then came Mara, who we wanted to be an example of a resourceful young woman who can face a completely alien and scary place like Agarth alone.
Finally, we created Darren, who is the one you think is a thug because of his body and looks, but he actually has the soul of a poet and he is a fiercely strong friend.

Author Bio:
Award-winning author of The Chronicles of Agartha – The Green Boy, is a fantasy fan and a history enthusiast as well. Originally a medical doctor who fell in love with the art of the word, and has since gone on to write several books in the various genres of fantasy. Some of his works include The Chronicles of Agartha Series, The Door, and The Eye of The Storm from the Esfah Saga series.

If he is not writing, he is most probably reading a fantasy novel, playing an RPG, or immersing himself in anything that seems to come from out of this world.

He is the proud father of two gorgeous girls whom he adores.