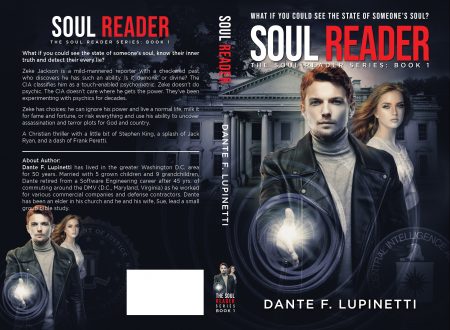 What if you could see the state of someone’s soul, know their inner truth and detect their every lie? Zeke Jackson is a young, mild-mannered reporter with a checkered past who discovers he has such an ability. Is it demonic or divine? The CIA classifies him as a touch-enabled psychometric. Zeke doesn’t do psychic. The CIA doesn’t care where he gets the power. They’ve been experimenting with psychics for decades. Zeke has choices: he can ignore his power and live a normal life, milk it for fame and fortune, or risk everything and use his ability to uncover assassination and terror plots for God and country. A Christian suspense, thriller with a little bit of Stephen King, a splash of Jack Ryan, a dash of Frank Peretti and a hint of Ted Dekker.

What Inspired You to Write Your Book?
I'm intrigued by the idea that the world we see and live in is not the whole picture. There's an entire sub-plot or under current that exists which is the real world. There is so much going on that we cannot access. Zeke Jackson gets access and influence into this world through his supernatural ability and he uses it for good. Zeke affects the physical world by operating in the unseen world of the supernatural.

How Did You Come up With Your Characters?
I 'm a fan of the reluctant hero. Zeke Jackson, the main character, starts out as a reluctant hero who, when he discovers his purpose, embraces it wholly. At first, he is tentative and skeptical not wanting to draw attention to himself. Then, when he realizes that this supernatural gift has been given to him by God, he grows in confidence and exercises the gift in his service to his God. Zeke, in a way, represents a young man leaving home and launching out into the world, finding his way, figuring things out. In Zeke's case he discovers that he is in possession of an unusual gift.

I needed a good compliment to Zeke. Abby, Zeke's main love interest, does just that. I remember meeting a couple who when asked how they met, the wife told how she met her husband as a security investigator. She was assigned to do an FBI security investigation on him. Later on they started dating. She already new everything about him.

Author Bio:
Dante F. Lupinetti has lived in the greater Washington D.C. area for 50 years. Married with 5 grown children and 9 grandchildren, Dante retired from a Software Engineering career after spending 45 yrs. commuting around the DMV (D.C., Maryland, Virginia) as he worked for various commercial companies and defense contractors. Dante has been an elder in his church and he and his wife, Sue, lead a small group bible study.