You are here: Home / Archives for Lara Frater 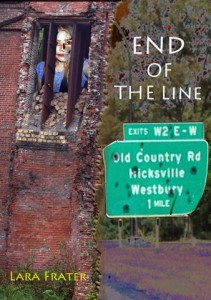 Ten months ago a worldwide flu epidemic decimated the world’s population-but some won’t stay dead. A group of survivors have been hiding in a warehouse store in Long Island to avoid the zombies have now decided to see if any hope of civilization has survived. Six very different people narrate End of the Line: Rachel a depressed nurse with a deadly secret. Jim, an optimist and gay man who believes his husband may still be alive, Tanya, a former thug, adjusting to being a leader, Ashley, an elderly woman who knows she only has so long to find her children and grandchildren, Dave who thinks that the military will eventually rescue them and Princess, a cold hearted woman, who can shoot any target with deadly accuracy. End of the Line is not only a story about zombies, but also a story about starting over.

What Inspired You to Write Your Book?
I had a zombie novel in my head and decided to write it for NaNoWriMo not thinking anything would become of it. Turns out I liked it enough to get it published.