You are here: Home / Archives for sexy 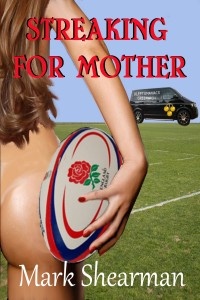 How far would you go to help the people you love?

A cynical, famous underwear model, and infamous international sports personality, despondent and guilt ridden because of a terrible mistake, finds redemption from helping the Streakers who ruined his chances of a world record.

After moving in with this bunch of dysfunctional guerrilla marketeers he discovers all isn’t what it seemed and finds out his life is being controlled by his estranged mother from beyond the grave.

His mother is also the patron of a large pawn brokers and the Streakers Matriarch who believe her absence is temporary. It soon becomes apparent to Ashley, she has left him with no choice but to help them move on with their lives and come to terms with her untimely death.

Ashley has made enemies too. He is viciously attacked, sent threatening messages, and attempts are made to destroy him in the media – both professionally and personally. With his new housemates by his side, they must discover and deal with his pursuer Streaker style.

What Inspired You to Write Your Book?
True life events living and sharing a house In London, when I was a construction site Manager, with some crazy and funny characters.
Also watching the film the fisher king got me thinking about how other people’s actions can disrupt and change people’s lives dramatically.