You are here: Home / Fiction / Take a Chance & Other Stories of Starting Over by T. L. Cooper 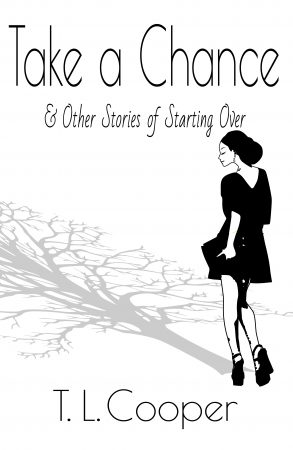 When past and present converge, the characters in these short stories must reexamine the future they planned. Myriad characters and situations populate these stories pushing the characters to decide whether to risk changing their lives as they face loss, love, and revelations. In these short stories of beginnings and endings, of recognizing moments of before and after, of choosing to stay or leave, of facing a future divergent from expectations, lives a thread of hope in life’s ability to transform.

What Inspired You to Write Your Book?
My fascination with human behavior, human morality, and human choices lead me to write a variety of short stories exploring how people handle the transitions in life they face whether instigated by themselves or someone else. Life itself is a constant instigation of choosing whether to take a chance or to follow the expected path.

How Did You Come up With Your Characters?
As a general rule, my characters come to me. They begin to whisper in the recesses of my imagination until I decide to write down what they're telling me. I find when I listen to what's developing, the characters are easier to write than when I try to push them into a mold to fit my expectations or what I presume the expectations of the reader will be. I prefer to sit back and let the character develop along with the story because I find it exciting, inspiring, and motivating to discover both the characters and their stories as I write.

Author Bio:
T. L. Cooper began weaving storytelling and social justice at a very young age when she attempted to save a groundhog’s life by creating an adventurous and full life for him in her stories while sitting on her grandpa’s knees.

Throughout her childhood, she wrote stories casting her classmates and herself as heroes and villains. Sharing her stories taught her words hold power as she watched the reactions of those around her.

She often explored teenage angst, friendship, and the choices she and her peers faced as she maneuvered high school.

By the time she started college at Eastern Kentucky University she’d developed a keen interest in human behavior and motivation, so she studied Corrections and Juvenile Services and Psychology. Her written work continued to explore human interaction and motivation.

After college she worked as a counselor with troubled teenagers, a project coordinator, a registrar assistant, and a temp before becoming a full-time author.

She has traveled extensively throughout the world feeding her passion for meeting new people and discovering both the similarities and the differences in the way people live.

Her work has been published in magazines, anthologies, books, and online. She has authored books of poetry, books of short stories, and a novel. She also writes three blogs, Write with TLC, Reviews with TLC, and Vegan Cooking with TLC.

She has served as Master of Ceremonies of a writer’s conference, taught classes and workshops, and moderated panels. In addition, she has participated in poetry readings and media interviews.

Her work continues to explore both the strength and the vulnerability that are interwoven into relationships large and small.

When she steps away from the keyboard, she enjoys yoga, meditation, hiking, golf, cooking, and interesting conversation.

Currently, she resides with her husband and three cats in Albany, Oregon.