You are here: Home / Drama / The Petition by Nichole Williams 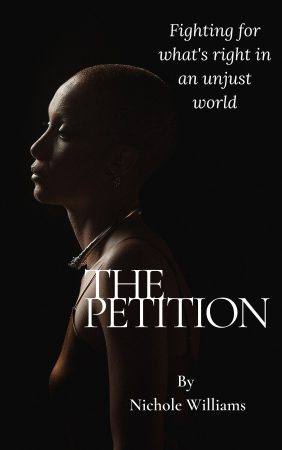 Fighting for what’s right in an unjust world. All Jessica wanted was a world filled with peace and justice for all, as most humans in the world do. Unknowingly the day came where she must fight for her son’s justice. A fight to see her son not become another systematic number in the log for the government.

What Inspired You to Write Your Book?
I always write from reality and real-life experiences and add a little twist. In the climate of today’s society, I wanted to write a story that touches on signing petitions which are heavy right now in the world, that many people can relate to.

How Did You Come up With Your Characters?
Building the story, I had to find the right main character a super petition signer that is passionate about what they do and for the antagonist I used wordplay. You must read the story to catch the name of the antagonist to understand why I said wordplay.

Book Sample
While sitting at Buster's house clueless and scared, Jessica watches Buster as he pulls out a law book from his massive library and turns to a page he has highlighted, and papers stuffed inside for Jessica to read. Back on November 1st, 1989 Jeffery Reynolds was charged with a felony based on signing a petition with penal code FJ- 5467-113. This charge turned conviction resulted in Jeffery serving five of the ten years he was sentenced to serve in jail. The same charge as Jessica's son is being charged with. Dropping the book to the floor Jessica in shock asks, "Buster this has happened before? Like this is a for-real thing?"
"Jessica as absurd as it may seem yes, it is a real thing sweetheart."
Buster was the ex-gang member turned activist turned civil law attorney in the neighborhood. A lot of people in the community would go and converse with him on many issues that surrounded the community and the world. He has been all around America, on the front lines fighting for racial quality, systemic racism, justice for those done wrong, and overall peace on earth. Jessica feels if anyone can help her son Buster can. At least he can help her get an understanding of what is going on with her son. With limited family and a small tight circle of friends she wonders who will hear her cry for help, who will help protest for her son being done wrong.
"Don't worry I'm going to see if I can get Ramone a lawyer, you know I'm here for you sis. Ramone is a good innocent kid." Buster looking at Jessica reminiscing on all the protests and frontlines he has been a part of and each one gets harder and harder for him especially when they hit close to home, but he continues to fight and be a pillar in his community.
"Thanks, Buster but can you just wake me up out of this bad dream." Jessica wiping a tear from her cheekbone while sipping from her Justice for All water bottle.
Sitting on her couch in her living room waiting for Ramone to get home from work, Jessica lights her Newport cigarette and rubs her right temple in nervousness. She hears the back door open and listens to her son's movement as Ramone opens the fridge looking for something to eat.
"Ma what are we having for dinner or did you already eat?" With no reply from Jessica, Ramone walks to the living room and sees his mother with tears in her eyes.
"Ma what's wrong, what's going on?"
Holding back a sea of tears Jessica tells Ramone, "I think you are going to jail son."
Ramone stares at her puzzled trying to think did he do something crazy with his friends lately and he says, "What are you talking about, look Ma I haven't hung out with Mickey and them in a minute, so I haven't been in no BS."
Jessica just stares at Ramone wishing he was nine instead of nineteen. "Son this has nothing to do with your knucklehead friends. Do you remember the two petitions you signed and what they were?"
Ramone looking up to the ceiling trying to remember tells his mom, "Yea one of them was for Lebron Williams the kid down the street who was shot and killed by police when he was picking up his little sister from daycare and they thought he fit the description of a man that robbed a bank around the corner from the daycare, but I just clicked on an email for that. The other was for some sort of politician thing I wasn't clear on, but it was some guy standing outside the store one day after work waving a clipboard in my face talking crazy. I hurried up and signed it to get him away from me."
"Shit! I bet that's the one!"
"That's the one what?"
"Son there is no easy way to say this but here it is. You are going to be served an arrest warrant for signing that petition."
Laughing the same way Jessica laughed when the FBI showed up at her door, Ramone stands up and heads to the kitchen.
"Ma if you need me to join your save the world team just say it, don't need idle threats and tears."
Getting up from the couch Jessica grabs Ramone's arm and says, "Son I'm so serious right now look at these papers!"
Looking over the papers that were given to his mother Ramone still confused starts to get infuriated. All Jessica could do was cry harder and try to hug her son.
"Son we are going to fight this!"
"Fight how Ma? They love putting us in Jail for simply walking on the wrong side of the street with a hoodie on a Sunday! I just signed a bullshit petition and they want to arrest me!"
Jessica sobbing, “This is not right, this is not right, God please help me understand.”

Links to Purchase eBooks
Link To Buy The Petition On Amazon

Author Bio:
The pen has always been mightier than the sword for Nichole Williams!  Her love for all things written is evident in the things she surrounds herself with. Born in Denver, Colorado, the indie author’s talent is being recognized nationally!  A graduate with a bachelor’s degree in Communications from the University of Colorado, she started the Nichole Nichole deals with Reality Poetry Blog. Her messages, stories and poems on her blog not only motivate and inspire but, also brings a daily dose of “reality”.  Her success has been noticed by many.  She now sits at #41 on Feedspot’s Top 100 Poetry Blogs and Influencers.