You are here: Home / Kindle Unlimited eBooks / The Stranger In The Attic: A Murder Mystery by Agnes Makoczy 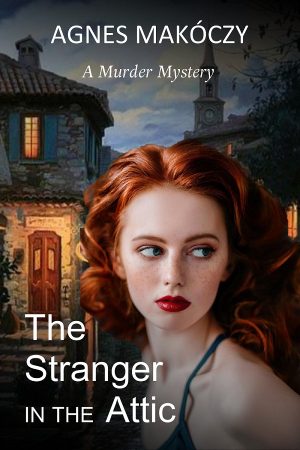 “There’s been another murder” yells the newsboy as he agitates a copy of the Daily News above his head.
Henrietta Jones is tired of being afraid. One by one, women with red hair are vanishing in the small town of Ember only to be found dead in an isolated Hunting Lodge at the back of the local park. Then, one cold, snowy night, a stranger appears on Henrietta’s doorstep, looking for a room to rent.
Torn between suspicion, fear, and a desperate need for money, Henrietta welcomes the stranger into her home. But as the body count rises, she watches the strange man living upstairs with eagle eyes, worried that there might be a killer among them. Because Henrietta, like all the dead women, has red hair.
As she impatiently waits for the police to carry out their investigations, Henrietta realizes that danger could be closer than she thought. Her husband, her neighbor, and others around her carry long-submerged secrets that could be putting her in danger. Fearing for her life, she takes matters into her own hands, not realizing that by doing so, she has become marked for death.

What Inspired You to Write Your Book?
I love writing. As I hit middle age, I started observing how those around me had changed down the years. Don't know how to write this without fewer I's, sorry, but I write this Murder Mystery Series, The Margo Fontaine Mysteries, and it's set in Louisiana, where I've spent most of my adult life. If you're looking for quirky, unique, at times superstitious, and super interesting people, go to Louisiana! Anyway, this couple that the story is about, didn't fit in any of my books in the series, so one morning, being in quarantine without much to do, I sat down and wrote a one off, about this unloved middle-aged redheaded woman who stumbles upon a murder mystery that changes her life. There you go. You'll have to read it to find out the rest!

How Did You Come up With Your Characters?
Lol, I hope my neighbors don't read this. But I got caught in many an awkward moment at their place while visiting. Alfred–won't tell you his real name–is a lazy, persnickety husband. His long-suffering wife Henrietta, is nosy and feels very unloved. But she bottles it all in, and as the years go by, their relationship has deteriorated. Then, she meets a stranger. I'm afraid to spoil the ending if I say more =)

Book Sample
The Stranger in the Attic

Chapter 1. Intro
After a long and dreary day in which nothing of importance had happened, Alfred and Henrietta Jones sat by the fireplace, dully staring into the dying embers.
The day had been mercilessly cold. A frigid winter front had brought plenty of snow, and Henrietta thought sadly about all the errands that she should have run before the weather deteriorated. But it was too late to worry about that. They would have to make do with what they had, and that would be that.
The Jones’ three-story rambling house sat—the fourth in a row of identical buildings—in what had once been a respectable neighborhood, but since the downturn of the economy a few years back, the town had fallen on hard times, and their once-lovely neighborhood had slowly begun to decay, overlooked by progress, forgotten by the city officials. Anymore, drunks, homeless people and drug-addicts shared the doorways of the cozier buildings, especially on cold nights like this, when the benches in the parks froze over, and the wind whistled among the trees, cruel and unforgiving, chasing away those poor creatures who had nowhere else to sleep. And so, life went on.
Even though the structure was old, and now in such a sordid neighborhood, the Joneses kept their three-story house as sparkling clean and impeccable as the day they had bought it proudly, when it had been brand new. That is, Mrs. Jones kept the house, and Mr. Jones happily lived in it, oblivious to the effect the hard work had on the feeble body of his aging wife.
Had you looked into their living room, you would have thought it a cozy scene of a happily married couple enjoying their retirement, but you would have soon noticed that while Mr. Jones’s leather armchair was plush and newish, and comfortable, Mrs. Jones sat on an uncomfortable straight-backed chair, looking overworked, grumpy, pale, and exhausted.
Still, the room had retained the remnants of a forgotten elegance. The furniture was good, solid, albeit old-fashioned. The damask window curtains had cost a fortune thirty years earlier and were still lovely, and effective at keeping the grime of reality at bay. The rug too, had been carefully chosen to complement the stylish room, and was still as handsome as it had once been, although somewhat threadbare now, but still Mrs. Jones’s pride and joy.
But the sad reality was that Mr. and Mrs. Jones—like so many old people—had fallen on hard times. They had tried to sell the leather armchair and some of the antiques in the house, but buyers—suspecting how desperately they needed the money—offered too little, and therefore Mr. and Mrs. Jones had decided, at least temporarily, to hold on to their belongings.
It was about all this that Mrs. Jones was thinking sadly as she sat resentfully on her hard-backed chair. Alfred seemed oblivious to the fact that they had become so poor that there was little heating in the house during the winter, and meat and fruits had become a luxury. Nothing flustered Alfred, who insisted on being happy despite the circumstances, which really annoyed her.
Because, even though Mrs. Jones was very frugal and had learned to cook with less money and run the house on almost nothing, poverty was catching up to them. Many nights they had sat like this at a cold hearth—the fireplace often remaining unlit to economize—as Henrietta Jones had stared into its void with despair. Not speaking, because there was nothing to say.

Chapter 2. The First Murder
Ember Street is long. It seems to go on forever. Like a snake, it twists and bends along the small meandering river that gurgles happily along, dividing the town in two. On both sides, river walks built in its glory days grace the shore, providing a country park atmosphere dotted with benches and playgrounds always full of pedestrians, children, and pets. It’s the route Mrs. Jones always takes when she—more and more infrequently—goes out to shop.
Once, a very long time ago, Mr. Jones had enjoyed walking his wife to the shops and having a beer with acquaintances while he waited for her to be done. But with the passing of the years, Mrs. Jones acquired an unpleasant air of silent suffering, and Mr. Jones couldn’t take that. There was nothing he could do to improve their fate in life, and—being a cheerful man at heart—he hated to watch that bitter look on his wife’s face.
But Mrs. Jones soon discovered that she rather enjoyed going to the shops alone. In fact, her husband would have been shocked to see the relief in her eyes when she stepped away from him.
So, Mrs. Jones took her time shopping and strolling, and it was late afternoon by the time she got back home. She struggled up the icy steps feeling the weight of her grocery bags which she put on the floor while she rummaged in her purse for the keys.
Once inside, she said hello to her husband, who was sitting reading in his plush, comfortable armchair and headed straight for the kitchen. Alfred—her husband—forgot again to offer his help with the grocery bags, but Henrietta didn’t say anything this time. She was tired of reminding him to be more helpful because she rarely accomplished anything with complaining.
She was just putting the groceries on the kitchen counter when she heard a piercing cry followed by muffled sounds of rushing footsteps and loud, shrill shouting coming from outside the living-room window.
She hurried to the window and pulled the damask curtain aside to see what was going on, and Mr. Jones jumped up from his leather armchair and joined her. They stared outside into the gathering dusk looking for the commotion and saw the newspaper boy running down the street yelling something very important while agitating a newspaper above his head.
“Murder,” he yelled. “Murder.” As Mr. and Mrs. Jones watched, a crowd of pedestrians gathered around the newspaper vendor and, within seconds, every copy of the newspapers had been sold. Just like that. It was hard to believe. Mrs. Jones couldn’t remember the last time she had heard a cry of “murder” and she anxiously continued staring out of the window wondering what else was going to happen next.
“I must go and find out what’s going on,” Mr. Jones told his wife in a voice shaking with anticipation.
“But look, the boy doesn’t have any more newspapers.”
“No matter. One of the neighbors will tell me. Someone ought to know what's happened.”

Links to Purchase Print Books
Link to Buy The Stranger In The Attic: A Murder Mystery Print Edition at Amazon

Links to Purchase eBooks
Link To Buy The Stranger In The Attic: A Murder Mystery On Amazon

Author Bio:
Agnes Makóczy is a freelance writer and adventure traveler. Always on the road, she finds inspiration for her stories in the places she travels to. She's the author of the Margo Fontaine Mysteries, a series that takes place in the fictional seaside town of Half Moon Bay, in South Louisiana, the land of swamps, alligators, haunted hotels and plantation homes, where well-kept secrets, and the stories of old Southern families, will conspire to keep you reading into the night.
Ms. Makóczy loves to write. After brief attempts at Romance Novels and one Health book, she’s had to face the truth: she loves writing Murder Mysteries the best.