You are here: Home / Bargain Books Under $3 / Through The Storm by Sherif Guirguis 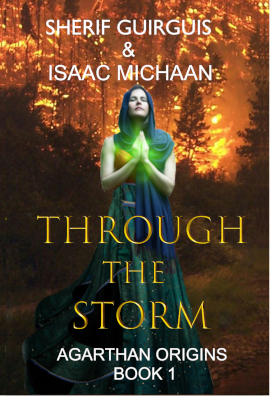 Rowida walks a path of power, but at what cost?
Rowida is an Agarthan with a green aura, and the green aura nation is known for its modesty. Not Rowida though, she despises modesty, and thinks of it as a pretense. Rowida is honest, she wants power.

Her path to power is not without suffering and sacrifice, but she intends to walk it to its end.
Attaining power always has a hefty price, but will Rowida learn before it is too late?

Rowida might become the greatest warlord Agartha has known, she might become near-immortal, but to gain something, you must lose another, and sometimes the loss surpasses the gain.

Playing to the tune of a hidden prophecy, Rowida’s path crosses the fate of two worlds, and it might lead to their destruction.

Rowida intends to leave her mark on history, and nothing marks history more than War.

The fates are watching, observing, and deciding…
No one can revoke their final decision — not even an immortal.

What Inspired You to Write Your Book?
Isaac Michaan my co-author approached me back in 2019 about an idea he had of a world where all the mythical creatures from all mythologies live.
He proposed the idea of Hollow Earth to be the place where this story can happen.
From that point, we talked for over a month to build this world and a story plot.
This gave birth to the chronicles of Agartha universe, where we have three series running alongside each other.

How Did You Come up With Your Characters?
When Isaac and I wrote The Green Boy, I wanted the backstory to have something massive, a global war. But since you can't have a 200,000 words book in print, we decided to leave it at hints to the war in book 1.
Then I decided to take that story, and develop it further into a book of its own.
So, as we wrote The Green Boy, I worked on Through The Storm, and Rowida was born.

Book Sample
“Rowida Verdum,” the councilwoman addressed Rowida, whose limbs were tied down with special cuffs supplied by the purple mages. “Your crimes are unprecedented. You are the worst criminal to be ever judged in the history of this council. We have seen no one as ruthless as you, not even in the legends and lore of Agartha.”
Rowida laughed a long, throaty laugh in response.
“You killed seven men and four women in less than a month, including three of our most adept guards and your own mentor.” The councilwoman spoke in a firm, melodic voice.
“She had it coming,” Rowida spat. “She was always taunting me about my inferior status.”
“What was bad about your status?” Another councilman addressed Rowida with rumbling tones. “You had a good life with the other apprentices, three meals a day, and a future in mineral detection to keep you well-to-do for the rest of your days. It is a life most people would have fought to have, a meal in their bellies whenever they need, and a roof over their heads for the entirety of their lives.”
“I don’t want to be well-fed,” screamed Rowida. “I was special at Nafoura, but you refused to recognize this unless I had a powerful Vrill. You can’t blame me then for procuring the needed Vrill.”
“By stealing the souls of others?” The councilwoman said with disdain filling her words. “Such a low and heinous act, just to satisfy your own greed and hunger for power, an act as merciless as we have never heard of.”
“But you did.” Rowida smiled viciously as she spoke. “It is right there in the ballad of the Black Empress.”
“Do you mean the mythical tales of the worst character in our lore? Malachi the Terrible, is a man who will always be remembered as a traitor to Agartha.”
Another councilman said, “A myth about an evil man, remembered only for his evil deeds, and even if the ballad was true, it happened two thousand years ago.”
“Yet his line ruled Agartha for nine hundred years,” Rowida said as she laughed. “History be damned. Malachi the Terrible was a man with a vision, one which united all the warring tribes of this land.”
“Enough of this,” the head of the council, and ruler of the land, shouted at the assemblage and at Rowida. “We have been deliberating on the way to punish you, and we have settled on one.”
The ruler raised his voice as he said, “We will strip you of all of your stollen Aura, and almost all of yours, leaving you just enough to survive the procedure.” He shook his head sadly, and said, “We didn’t want to do this, but you can’t be allowed to live in Agartha. You set a horrible example of how a green should live. So, besides stripping you of your Aura, we employed a purple mage to compel you to go to the surface world, forever banished from ours.”
Rowida’s screams resounded on the council’s walls as a purple mage approached her with a small cube, another unique and powerful Arcanos. She felt its power instantly when he placed it on her forehead.
There was no glow this time, not like with the staff, just a low whine and wafts of smoke rising from Rowida’s body. Then the mage made intricate moves with his metal rod, the one all purples carry to concentrate the forces of nature to do their miracles, and he whispered a few words in her ears.
Two guards approached her and removed her cuffs, and she couldn’t resist going step after step out of the council hall, down the streets of Zarzura, and towards the gate.
The guards opened the gates for her to leave, and she just marched on.

Rowida cried hot tears as she ate fruits and drank water from the spring she slept beside last night. For three weeks, she had to walk westwards, only stopping when hunger was too much to bear, and sleep was too strong to overcome.
They gave her one canteen of water and a knife, and if not for her survival instinct, she would have died twenty times over.
She had bad blisters on her feet, joined by pains in her knees and hips, but still, the pain coming from the compelling spell was ten times worse.
She couldn’t resist the urge long, she had to stand up and walk, or else, the pains would attack every inch of her body.
For some obscure reason, all magical creatures avoided her, her only challenges were big cats or the occasional wolf, and she could manage those. She didn’t know whether it was her diminished aura, or the spell put on her by the purple mage which pushed the magical creatures away, but she was resentful of this fact with all her being, she would have welcomed a swift death against an unbeatable opponent far more than her horrible existence.
She stood up and started to walk, forever westwards.

Rowida didn’t know which day was this since she was banished, but winter came and went during the period she walked, forever heading towards some point in the west.
She no longer cried her fate. As of recent, she felt almost nothing, no hate, no fear, nothing. She also grew far stronger physically, her legs, and her arms were now twice the size they were since she left Zarzura.
For the last five days, she traveled in the shadow of an immense mountain, and her urge was leading her continuously towards its base.
Today, she was almost at the base, and she assumed that a portal of some kind would be present there to take her to the surface world. She walked on, she couldn’t do anything else, as she was not hungry, nor sleepy, and the compelling spell was controlling her like a puppet to walk whenever she could.
Rowida suddenly saw a shimmering object at the base of the mountain as she walked closer. She sighed and approached the shining spot, as she reasoned this could be her way out of Agartha. She resolutely walked to it and entered through it.
There was a moment Rowida felt she was stripped of her body, then just as fast, she was standing in a bustling city, a large square where many women in different stages of pregnancy walked around together.
The compelling spell seemed to have ceased to affect her, and she stood for a moment, feeling relief washing over her.
“We have been expecting you,” a woman spoke to Rowida as she walked across the square towards her. “A message was sent eighteen months ago to receive you and facilitate your journey forward.”
“Where am I?” Rowida asked the woman as she gazed at familiar architecture, one which she couldn’t place from memory.
“You are in Beimini, the nursery half of Beimini, that is.” The woman smiled gently.

Author Bio:
Award-winning author of The Chronicles of Agartha – The Green Boy, is a fantasy fan and a history enthusiast as well. Originally a medical doctor who fell in love with the art of the word, and has since gone on to write several books in the various genres of fantasy. Some of his works include The Chronicles of Agartha Series, The Door, and The Eye of The Storm from the Esfah Saga series.

If he is not writing, he is most probably reading a fantasy novel, playing an RPG, or immersing himself in anything that seems to come from out of this world.

He is the proud father of two gorgeous girls whom he adores.