You are here: Home / Archives for Happily Ever After 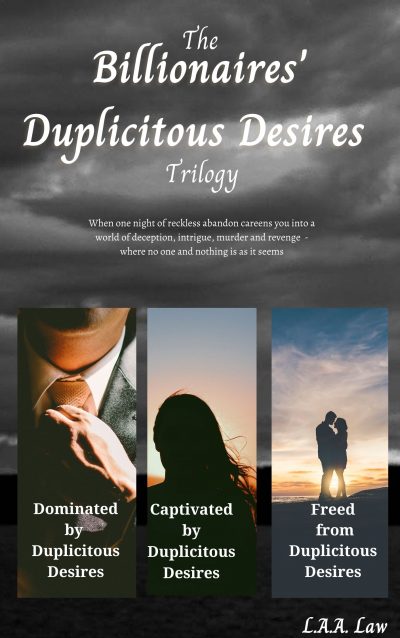 Come enter into the world where one night of reckless abandon plunges Ann into a world of deception, intrigue, murder, and revenge where nothing is as it seems and she is the red flag in a tug-o-war of powerful businessmen who will dominate her, protect her, or strip her bare.

While attending the charitable event, Ann is knocked off her feet by billionaire businessman, Stephan Greystone. His steel eyes flare with fiery desire inflaming her core and igniting an insatiable hunger for a man she can never have. As a stunning woman joins him and his eyes turn cool, waves of self-doubt and insecurity to crash over Ann prompting her to flee.

Never did she expect that her hopes of catching an impossible dream would lead her into the arms of a man who derives pleasure from inflicting pain and spur her descent into a world of deception, intrigue, murder, and revenge where nothing is as it seems, and the only people surrounding her are those with an agenda to unlock information from her past that even she does not know she has or strip away all that she has known.

As devastating secrets are revealed, so too are new enemies whose duplicity and control over Ann’s life has led her to suffer more than she could have ever envisioned. Running from those who fought to control her leads Ann to revelations she never envisioned and forces her to make the hardest decision of her life leaving her vulnerable.
Ann’s heart breaks as she separates from the man who brings her to life. As the duplicity mounts, enemies from her mother’s past join with adversaries of Stephan and Ann’s present to destroy those who threaten their criminal existence. Fighting to escape the control, Ann searches for answers in the past and engages in a deadly game turning her enemies against each other while unintentionally ensnaring those she desires to protect.

As lines are drawn, Ann sees those she trusts the most suffer and Stephan shot. Ann finally brings to light the information that should send her enemies to their destruction and free those who have become important to her. Unfortunately as an old flame returns to claim the man who has finally made Ann’s heart whole, Ann puts his happiness before her own and flees into the cold dark night in search of a new existence, one without her heart and soul.

Three months have passed since Ann escaped and changed her name to Noone, because that is exactly who she feels like as she fights each day to move beyond her inability to engage with those around her. Despite joining a company where the owners, Renee and Rossi Fiore, specialize in developing new images and treat their employees like family, Ann keeps herself on the outskirts, a casual observer of the life around her, but one in which she cannot engage.
When asked by her bosses to assist with a pitch to a client who can send their business into the stratosphere, Ann unwittingly catches the eye of the client’s son and protégé, Jason. In doing so, Ann finds herself pursued by another high-powered man who wants to pull her from her self-imposed hell.

Jason Stewart has secrets that caused him to walk away from the woman he loved and keeps him separated from his family. While working to establish a new image for a resort destination, he is drawn to the lost soul of another whose very essence calls to him in a way that no other woman has since the day he walked out on Deanna. In forcing Ann out of the shadows and into his life, will two souls who ache for those they believe are lost forge a connection or will the secret that Ann uncovers in Jason’s life and the threat from her past lead to a relationship that neither of them thought possible?

The Billionaires’ Duplicitous Desires Trilogy is a complete box set where the reader can enter the world of intrigue, deception, murder and revenge surrounding the mysterious Ann Stanton, a woman who is not aware of who she truly is and the valuable information she holds until she begins a dangerous dance with Stephan Greystone, an alpha billionaire with secrets of his own, and a man who can lead Ann either to the answers she desires or the destruction she fears.

Reviews of the first book:
END_OF_DOCUMENT_TOKEN_TO_BE_REPLACED

Doug has grown up poor, envying what others have. When he meets wealthy Catherine, he thinks she is his ticket to all that he desires. He marries her for her wealth only to find that he covets one more thing — independence. Here is where the mystery begins. He finds something in the secret compartment of his new Corvette that will grant him this independence and will change his life and Catherine’s forever. Catherine finds escape at The Osprey Cove Lodge and finds an opportunity to rebuild her life. Everyone needs an Osprey Cove Lodge in their life. Follow the suspense, mystery, and romance of Book 1 of The Osprey Cove Lodge Series.