You are here: Home / Archives for wormhole

END_OF_DOCUMENT_TOKEN_TO_BE_REPLACED

Edge of Death by Joni Parker

In this second installment of The Admiralty Archives, the warrior Lady Alexin, the Keeper of the Keys for the Elf realm of Eledon, finds herself exiled to the harsh world of near-future London. Rendered little more than a political pawn by the Elfin Council of Elders to avoid a war with the Rock Elves, she has little choice but to struggle to find her way in this strange new land. Taken under the protection of kindly mentors, Vice Admiral Malcolm Teller of the British Royal Navy and his wife, Alex brings all her skills to the fore as she uncovers a series of deadly plots.
Murder is on everyone’s mind as an underground White Supremacist organization takes aim at Admiral Teller while two wizards, resurrected from death, must kill Alex in order to survive. To make matters worse, the Rock Elves dispatch a hundred assassins from Eledon with their sole mission to bring Lady Alexin to the very… Edge of Death.

END_OF_DOCUMENT_TOKEN_TO_BE_REPLACED 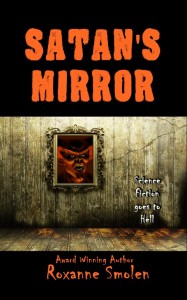 Emily is the host of a paranormal television show. Her mission is to debunk all myths and urban legends. But when she meets Satan in a haunted house and calls him a fraud, the repercussions change her life. Satan kidnaps her six-year-old daughter, and Emily vows vengeance. For centuries, demons have been abducting people and pulling them through wormholes to an alternate universe. The hapless victims are then tortured for the demons’ pleasure. Because humans are out of sync with time, they cannot die. They must endure the sadistic revelry for eternity. Emily will do anything to rescue her daughter–even if it means storming the underworld and battling the denizens of hell. But if she does somehow find her little girl–how will they find their way out?

What Inspired You to Write Your Book?
Satan’s Mirror was inspired by the myth of Persephone, the Goddess of Spring who was kidnapped by Hades and taken to the Underworld.

Who are your favorite authors?
I love to read books in a series, and I usually read and re-read them until I know them by heart. The Harry Potter series by J.K. Rowling is one such series as is The Chronicles of Thomas Covenant by Stephen Donaldson. I’m a big fan of The Dresden Files by Jim Butcher. I also enjoy the Sookie Stackhouse books by Charlaine Harris.