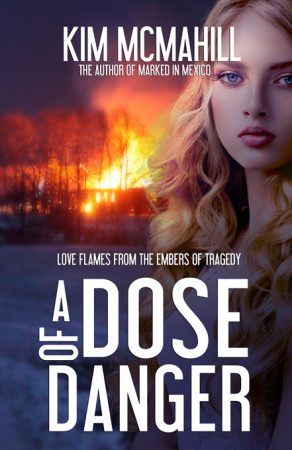 When researcher Grace Talbot and her team discover a possible solution for weight loss, they are targeted by a group dedicated to controlling the diet product industry worth billions. Her unsanctioned testing methods bring tragedy to the family ranch and the attention of the local sheriff’s deputy. With her colleagues either dead, missing, or on the run she soon realizes she must trust the deputy with her life, but can she trust him with her heart?

What Inspired You to Write Your Book?
As I’ve gotten older, I’ve begun paying more attention to what I eat and my overall health. The more I read about nutrition and fitness the more confused I become, especially when it comes to supplements. There are a myriad of products out there that make all sorts of claims, but what’s true? I’m sure the answer is very complex because there are a lot of variables that influence a products effectiveness, which makes the subject an excellent topic for fiction. I primarily write to entertain with stories of adventure and suspense. If the reader finds a helpful message in one of my books that’s wonderful, but mostly I simply hope to provide an escape from the everyday with a dramatic and entertaining tale.

How Did You Come up With Your Characters?
I keep a notebook by my chair and whenever I hear a name that intrigues me, I jot it down along with unique character traits. I also keep a file of magazine clippings of people who have an interesting look to them. Most characters will be developed using a combination of these photographs, personal knowledge, and my imagination in order to build the perfect character needed to carry out his or her role in the story.

Book Sample
The unmistakable haze of smoke filled the valley below. Snow covered the ground and weighed heavily on the pine boughs lining the highway, ruling out a forest fire as the source of the dark billows. The old rancher rolled down his window, despite the bitter cold, and inhaled deeply. The air smelled of fire, destruction, and death.

With the last switchback navigated, he shifted up and pressed the accelerator down as far as he dared while driving on icy roads. He tried not to let his imagination get the best of him, but couldn’t help but fear the worst. Someone, maybe even him, was suffering a loss.

As he approached the turnoff to his ranch, he realized immediately the nightmare was indeed his. Gunning the one one-ton’s motor, he churned down the snow-covered dirt lane at such a rate of speed he didn’t even notice the fresh set of tire tracks cutting through the white powder —new tracks, since he’d left for town just hours before.

The large truck skidded to a stop. The rancher leapt out and raced toward the burning building, praying there were no animals inside. The real terror came as he realized his ranch manager was nowhere in sight. Hoses remained coiled up, hanging on a fence post, not connected to the spigot, as would be expected if anyone were attempting to control the blaze.

Flames and smoke poured out of the second-story loft, sucking the oxygen out of the air as he approached the now fully engulfed building. Grasping the handle on one of the barn doors, he yanked back with all his might. It didn’t budge. He could hear the crashing of timbers collapsing onto the floor and the crackling and popping of fire eating away the interior of the building. Throwing his shoulder into the solid wood, he could feel the intense heat through the door and his heavy winter coat.

The situation made no sense. The large double doors had no lock, and could, in fact, swing inward or outward. Glancing at the ranch manager’s house, he prayed his longtime friend and employee was sleeping through the chaos, but he knew better. If the startled cry of hens harassed by raccoons in the middle of the night could stir him, the fire would have drawn him out instantly.

Yelling at the top of his lungs, the old man got no response, but inhaled a choking dose of smoke in the process. He doubled over as he tried to expel the smoke from his lungs and gather his strength. His eyes burned, and his lungs ached as he backed up, giving himself a running start. He threw his body against the door, but the strong timbers held fast. After several more attempts to break through, he realized the futility in his efforts. As the heat, flames, and smoke intensified, he knew he had to act quickly. If anyone were inside, it might already be too late.

He ran toward the row of small windows on the side of the barn, which allowed light into the stables. Each pane was high enough to prevent a horse from breaking the glass, and too small for an adult to crawl through. Sliding a metal five five-gallon bucket close, he hoped to elevate himself enough to see if anyone was inside. The instant he got one foot on the bucket, the windows blew out, showering him with glass shards, burning his flesh, and throwing him to the 66 ground hard.

He rolled across the snow to extinguish the flames, which burned through his coat. He ignored the searing pain on every piece of exposed flesh. He struggled to his feet, grasping for a plan. Get the truck. Nothing can stop that beast. It will break through those doors, he thought as he turned away from the building.

Then everything went black.

Author Bio:
Kim McMahill grew up in Wyoming which is where she developed her sense of adventure and love of the outdoors. She started out writing non-fiction, but her passion for exotic world travel, outrageous adventures, stories of survival, and happily-ever-after endings soon drew her into a world of romantic suspense and adventure fiction. Along with writing novels Kim has also published over eighty travel and geographic articles, and contributed to a travel story anthology. She has had the opportunity to live in Hawaii, New Mexico, South Dakota, Iowa, and Colorado, but has finally returned home to Wyoming. When not writing she enjoys gardening, traveling, hiking, puzzles, playing games, and spending time with family.