You are here: Home / Archives for Heat Level 3 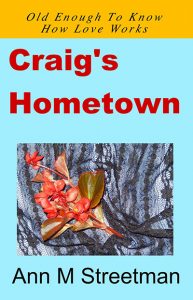 Long Description for Craig’s Hometown
Kathryn Sinter had run away from home because home wasn’t what she thought it was. She had chosen Seattle because she liked seafood and flowers and it was as far as she could get from her soon to be ex-husband without drowning in the ocean. Her plans for re-invention did not include a man, but Craig Hameston, a recently retired diver in the Royal Canadian Navy Reserve, was hard to ignore.

Part-Scottish and part-Esquimalt First Nations Family, he turned her weekend trip to Victoria, B.C., into a personal tour of his hometown. The day after they met she was glad to be next to him, watching his sure hands and feet working the controls of his seaplane as they soared into the September sky on their way to a perfect picnic spot on Vancouver Island.

Craig appeared to be an old-school kind of gentleman. Maybe it was part of his military tradition. And, he was rock solid and sexy. When she returned to Seattle, part of her hoped she would see him again, but it scared the hell out of her to think about committing to a serious relationship with any man, even a man as special as Craig.