You are here: Home / Bargain Books Under $3 / A Murder for Christmas by P.C. James 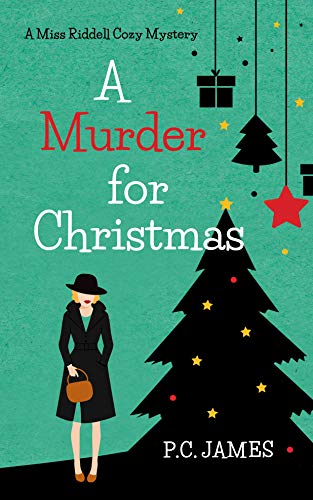 A Murder for Christmas by P.C. James

A Murder for Christmas is the third in the popular Miss Riddell Cozy Mysteries series.

Miss Riddell has returned to her parents’ home to nurse her sick mother. It’s Christmas 1962, northern England, and the worst winter for decades. If that isn’t bad enough, there’s a crime spree in the village, a forged will that will bring ruin to the neighborhood, and her first love, a roguish cousin, has just been murdered.

Can Miss Riddell solve the mysterious crime wave before she becomes one of its victims?

What Inspired You to Write Your Book?
My love of cozy murder mysteries, especially Miss Marple stories, led me to start writing my own based on Miss Marple and borrowing heavily from my aunts when I was growing up who were Miss Marple personified. The setting for this story was a Galapagos cruise we took some years ago and loved. Unfortunately, South American politics is often violent and I saw the opportunity to bring together the cruise and the politics in a cozy mystery.

How Did You Come up With Your Characters?
My heroine, Miss Riddell, is growing into the 'Miss Marple' I know and love. Agatha Christie doesn't explain how Miss Marple got her start in life, I'm laying out Miss Riddell's start for my readers in this set of stories. One day, she'll solve mysteries without leaving her village, perhaps.
The old cynic, Chief Inspector Ramsay, is very much me.
Miss Riddell's parents, her brother, and the villagers are based on members of my own extended family living and growing up in northern England.

“Why did you do that?” Pauline said angrily. Alan was the last word in obnoxious older brothers. Even as a kid, he was forever getting his younger siblings in trouble with one lunatic scheme after another. Weren’t the older kids supposed to be more mature than the younger ones? Pauline was sure there was a popular expression to that effect.

“It will be easy for you,” Alan said. “Look at how you’re always solving murders and such for the police. This is simple compared to that. Some small local disturbances are all we’re asking you to solve. It will take you a matter of hours. It won’t even disturb your holiday.”

Her holiday. Two weeks with Mum and Dad on the farm over a cold and increasingly snowy Christmas, with Mum ill and Dad laid up. Some holiday! Now this idiot, her blasted brother, had promised her time looking into silly pranks in his village five miles away. With the roads the way they were and the weather the way it was, how could she do that without moving in with Alan and his wife, Bessie?

“I’m not doing it, Alan. Mum and dad need me here, not over at Goathland, chasing naughty children.”

“Me and Jim will come to the farm every day to look after the beasts,” Alan said, “and you’ll have it all sorted out in a day, likely.”

This was ridiculous. She’d driven down to her family home only the night before, straight after work, taking this Saturday morning off work to be here earlier. It had been a frightening journey with snow on the roads here in the Dales. On the high ground, a wicked wind swirled the snow in the headlamps, blinding her view through the icy windscreen. And there’d been few other cars on the road after she’d left the main highway. Now, next morning, when she was barely recovered from her fright, Alan arrives at the farm demanding she leave and solve mysterious events in the village and farms around him.

“No,” Pauline said. “You people live there; it will be your children doing this. You local folk sort it out yourselves.”

“It’s not the children, Polly,” Alan said, lapsing into the family nickname Pauline hated. “We thought that too at first. But it isn’t. It’s something bigger than it seems.”

“In Goathland! What could be big in any way in Goathland?”

As she followed him back to his farm, however, she remembered what could be bigger. She couldn’t miss it, or to be precise, them. Stark opal white against low black clouds that threatened yet more snow, the giant ‘golf balls’ of the Fylingdales early warning station loomed menacingly over moor and dale. Placed there by the United States Air Force and operated by the Royal Air Force, they were supposed to give the West fifteen minutes warning should the Soviet Union launch its intercontinental nuclear ballistic missiles, or so it was said. No one knew for sure. They were too secret for real knowledge. Pauline frowned as she tried to keep her eyes on the road and away from the golf balls. Her first investigation (she never said ‘case’ it was too official-sounding) had been about spies, though she hadn’t realized that until the very end. Was this about spies too and should she be thinking about them from the very beginning?

After saying hello to Alan’s wife, Bessie, and the children, Alan said, “We’re going straight to the manor house.”

“Why?” Pauline asked, bewildered. The family at the manor hadn’t been mentioned in Alan’s earlier list of odd incidents.

“Because they have a story to tell I think you should hear.”

Leaving her own car in the yard of Alan’s farm, Pauline climbed into his Land Rover and they set off back up the farm road to the country lane that connected the farms along this dale with the outside world.

“What’s this all about, Alan?” Pauline asked, as she pulled her coat, scarf, and collar closer around her. The Land Rover’s heating was making no impression on the air temperature inside the cab, not that Alan seemed to notice. She wished she offered to drive in her own comfortable Wolseley, with its better seats and heating.

“Mr. Thornton will explain,” he said.

“What has it to do with the incidents you told me about?”

“Not sure. Maybe nothing. I think it does but you’ll have to decide for yourself.”

Pauline gritted her teeth and stared out of the window. The afternoon looked like it promised more snow by the time they were returning home. Maybe the Land Rover with its four-wheel drive was the better choice for this journey. As it bumped over the frozen, rutted farm road, however, jarring every bone in her body, she found that little comfort. And imagining the drive back to her parents’ farm through snow-covered roads in her own car gave her the shudders.