You are here: Home / Bargain Books Under $3 / Eagle Fangs by Ross Grayson 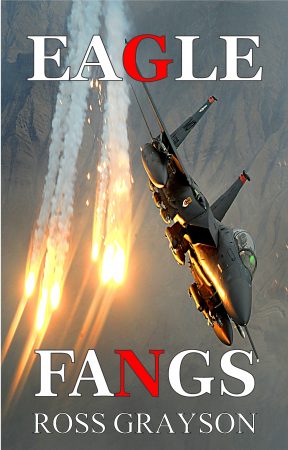 Eagle Fangs is a modern-day techno-thriller. A Mideast mastermind
conceives a brilliant fool proof plan to wipe out major cities across the globe.
He spends years acquiring mothballed Soviet nuclear warheads. This nuclear
“ultra-terrorist” hides in a remote location deep inside Iran on the Turkmenistan border. Once the warheads are restored to operability, he’ll scatter them across the civilized world and simultaneously detonate them on November 9 (11/9). A low-level Pentagon intelligence analyst notices a speck in the mountains. What is that? A hidden encampment? He alerts his superiors. They dismiss his analysis and don’t share his alarm. Desperate, he turns to his older brother who is the commander of a fighter squadron. His brother believes him. There is no time to go through proper channels. The fighter pilot assembles a small group of volunteers who must fly, undetected, over 8,000 miles. They will likely engage the entire air force of a hostile nation and, if they survive, certainly face the death sentence as war criminals. The realism and technical aspects are accurate down to the smallest detail.

What Inspired You to Write Your Book?
The author did a little flying for the Air Force as a young man. Over the years he worked with and witnessed a host of people who quietly went about doing important, difficult, and relatively obscure jobs. They were ever so committed. Sure, the pilots and the aircrews got all the credit. They deserved it. They were on the pointy end of the spear. But to a man, or a woman, they held the people who gave them a dependable flying machine in high regard. There were others in the Pentagon basement, or a spartan command post on some small Allied airbase, or sitting in a hot trailer in the desert, or driving a gas truck on an island in the middle of an ocean who collectively made it happen. He was inspired to pay tribute to those unseen and unheralded patriots. He was inspired to pay tribute to the spouses who also serve on the home front. They too sacrificed: and sometimes got a folded flag. When a member of the armed services died, rifle volleys shattered the sobs at the internment. He heard too many rifle volleys. He flinched every time. Finally, inspiration radiated from the pilots and aircrews who went into harm’s way and sometimes didn’t make it. Such inspired the author.

How Did You Come up With Your Characters?
One day I had a good talk with Brigadier General Steve Ritchie. He was the only Air Force ace of the Vietnam War. He was quiet, reserved, and supremely confident. Not quite what I expected from someone who shot down five MiGs. He was my inspiration for the squadron commander. He was the fighter pilots' fighter pilot. It was my good fortune to work with some officers who knew everything about everything. One crew commander always had the right answer to any question. There is no substitute for knowledge when time is of the essence and death waits just around the corner. Hence, he became the squadron commander’s back-seater. I had lunch with a woman who witnessed the Japanese attack on Pearl Harbor. Her husband was an Army Air Corps pilot. He didn't survive the war. She was a real lady and yet as down to earth as could be. She was quick-witted and a natural leader. She was also tough as nails. She was the inspiration for the squadron commander's wife. The secretary of defense in the novel was a close match for a senior officer who was universally despised for his ego and get-ahead-at-all-costs attitude. Chief Master Sergeant John Farmer was a rogue
leader who ignored regulations. He had more leadership ability in his little finger than
all the generals put together. He was the enemy’s worst nightmare. He inspired the
tanker wing commander character.

Book Sample
Laskar let his mind wander too long and his thoughts brought back many bitter memories. It was ironic that he learned so much from the Americans and now they were his enemy. He almost savored the potholes, the dust, and the diesel fumes as the bus jostled down the deserted highway. A long and difficult journey was almost over. It was now just a matter of hours. Time for retribution had finally arrived.

One particularly hectic afternoon in the ER, a neurosurgeon cracked a couple of crude jokes while he was working on an unconscious woman who was in a head-on collision. Sue caught up to the doctor in the hallway the next day. She told him that if he ever told filthy jokes in the ER again he'd be looking for another job. Indignant and angry, he went straight to the hospital CEO. Nurses didn't dress down doctors. She didn't know her damned place and he demanded an immediate apology.

The very pissed off F-22 pilot altered course, lit afterburners, and accelerated to Mach 2 plus. As far as the Raptor pilots were concerned, there were only stealth fighters and targets. The Raptors closed on the Iranians from behind them at incredible speed. They couldn't fire on the damned Iranians, but there were other ways to persuade the enemy to break off their attack.

He sat there for a long time bathed in the glow of his dad's heroism. He read the medal citations and wept. After he dried his tears, he put everything back in the helmet bag. A calm enveloped him as he whispered his father's words, "No son, but I flew with heroes." High above the Mediterranean Sea, Ed's eyes glistened and a faint smile played across the F-15E pilot's lips. He slowly gazed over the formation and humbly said, "No dad I'm not, but on this day I fly with heroes."

Author Bio:
The author developed an intense interest in aviation as a high school student. He toured England as part of the International Air Cadet Exchange. After a year at pilot training, he was reassigned to the nuclear weapons career field in the Air Force. He was assigned to the On-Site Inspection Agency formed by President Reagan to verify the Soviet Union’s compliance with the Strategic Arms Limitation Treaty. He was a top expert in the nuclear weapons arena. He taught effective writing and public speaking classes as an assistant professor at a major Midwest university. He enjoys the outdoors and lives on an unspoiled coastline where dolphins and manatees cavort and eagles soar. Routinely, he's forced to duck as hummingbirds swirl over his head in the butterfly garden. Flying squirrels eat sunflower seeds out of his hand. His favorite author is Tom Clancy and his early works. A published poet, he writes for the sheer joy of it. He promotes reading and his novels are found in many libraries. Ross knows that reading expands the mind, improves the vocabulary, and sometimes inspires.