You are here: Home / Buyer's Guides / Flames of Love by Erin Wright 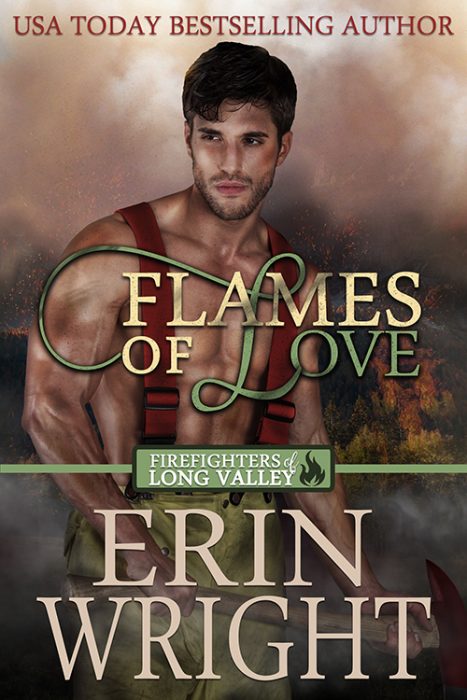 Flames of Love by Erin Wright

As a firefighter, Jaxson Anderson is well acquainted with danger. He’s charged into burning buildings to rescue men and women, young and old. He’s scaled ladders that towered over blistering infernos, and defied blazes that terrified lesser men.
Fire? He understands. Women? Not so much. Now *there’s* some real danger. He should know. He’s been burned before.
He’s not interested in romance, or the perils that come with it. His priority is caring for his two small boys, and making his mark as the new fire chief of Sawyer, but everything changes the day he catches sight of Sugar, the pretty girl who works at the local bakery. Sugar is exactly what he wants: A fun, no-strings distraction. A friends-with-benefits arrangement that won’t break what’s left of his heart.

On the heels of an abusive marriage, Sugar Stonemyer is done with men. But when Jaxson Anderson strolls into the bakery with a very wicked offer, she can’t resist. One look at the fireman, and Sugar knows the Sawyer rumor mills haven’t exaggerated. Jaxson’s tall, dark, and smokin’ hot. He wants an arrangement, nothing more, and that’s perfect.
Or so she thought.
With each slow seduction, Sugar falls a little more. She has only herself to blame. She didn’t want either of them to have feelings, but that’s not how the game is played…

What Inspired You to Write Your Book?
All of the books that I write are in the same world: Long Valley, Idaho. As part of that contemporary western romance world, I of course had to have hunky firefighters. 😉 "Flames of Love" is the start of the four-book Firefighter series but if you enjoy the Firefighter series, you'll definitely want to cross over and read through the main series also, since characters criss-cross between the series regularly.

How Did You Come up With Your Characters?
I do all of my plotting with my husband, actually. We go out for a drive together and start to ping-pong ideas off each other. We usually start with a struggle that one of the characters is dealing with and then start to look at how that'd affect relationships, etc, and come up with a "foil" for that character (and thus create the other main character for a book).

With "Flames of Love," I honestly cannot remember who first came up with Jaxson and Sugar – since we tend to play off each other, my characters grow organically as my husband and I work through the overarching plot.

If I were to ever lose my husband, I'd be in BIG trouble. I don't think I can plot a book by myself!

For joining the author’s email/newsletter list you will get:
A free novella that ONLY newsletter subscribers can read