You are here: Home / Fantasy / Rise: A Blood Inheritance Novel by M. Ainihi 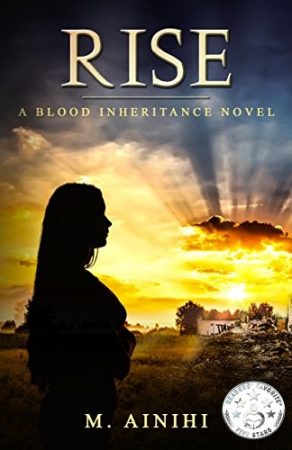 How Did You Come up With Your Characters?
The main character in "Rise" is Amanda Garrett. She begins hers journey as a pretty average teenager. I am not sure that I remember my original inspiration for her, but my main aspiration has been to keep her characters reactions believable, even if it means she may become unlikable at times.

Book Sample
Chapter 18
Pg. 131
“I thought I saw something.” Amanda dropped to her knees
in the grass beside some of the bright red flowers. She brushed at the palm-sized petals with her hand, parting them to inspect the area closer to the ground. “I swore it went past by my face, a blue creature, it swooped down and I thought…”
A red thing unfolded itself from one of the petals and darted at
her. Angry at the intrusion, it circled her head once, flapping its leathery wings. Then, as if cursing at her, it stopped, hovering directly in front of her face, its small claws poised for attack if necessary as it took in the sight of her.
She could see its tiny nostrils flare as the small winged reptile opened its mouth, releasing a puff of smoke. It beat its wings in her direction one more time as if making a point before turning and flying away, its long slender tail whipping back and forth behind it.
Aden lowered himself to sit by Amanda.
Amanda leaned in closer to the ground and watched as another similar creature uncurled itself from the deep grass, this one an identical shade of green. It spread its wings and beat them several times, revealing sharp spikes that lined its back before it lifted and flew away.
Aden grinned. “Dragons.” She raised one eyebrow and stood, placing her hands on her hips. “In human lore that’s what they call them, anyway.” Aden continued to examine the shrubbery.
“No way, those are tiny.”
“They always were.” Aden looked up at her, squinting as the
sun hit his eyes. “Humans have a tendency to embellish, from what I have learned, anyway.” He went back to his search. “They come in all sorts of colors, and they are very protective of their homes.”
Amanda watched him as he hunted. For a moment he looked happy. His eyes seemed to twinkle with excitement.
Aden stood back up. “I had always wanted to see them up close.
They never used to come down from their mountain nests…”
He stumbled over the words, adding, “When I was a youngling.”
Aden’s eyes glazed over, and his frown returned.
“They are kind of cute.” Amanda smirked again. “Can they be blue?” she added, remembering what she had been looking for to begin with, still hoping it had been a wisp. She hadn’t seen them anywhere in the castle since she had left the dungeon.
Aden nodded. “They like to rest where they can blend in, like camouflage. They may be cute, but their claws and teeth are razor-sharp.” Aden made a scratching motion with his hand and cocked his head. “Don’t worry, like I said, their nests are high up in the mountains, hidden in cracks and crevasses. They won’t attack unless you disturb those.”
“Well,” Amanda reached her hand out to Aden, “we will be
sure to stay away from the mountain range then.”

Author Bio:
M. Ainihi is a passionate independent author and adventurer. Hailing from the wilds of Upstate New York and currently residing in the Chicagoland area, Rise is her first novel in a planned quartet.